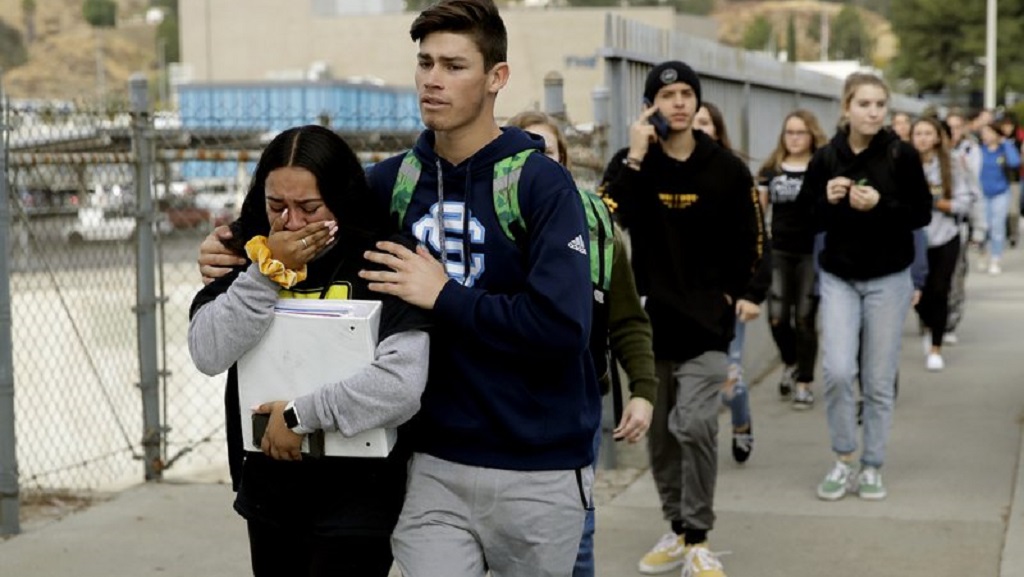 A student gunman opened fire Thursday at a Southern California high school, killing two students, wounding three others and shooting himself in the head, authorities said. He was in grave condition.

The shooting occurred around 7.30 am at Saugus High School in Santa Clarita, about 30 miles (48 kilometres) northwest of downtown Los Angeles.

Shauna Orandi, 16, said she was in her Spanish class doing homework when she heard four gunshots that she initially mistook as instruments from a band class. She said a student burst into the room saying he’d seen the gunman, and her classmates were stunned into silence.

“My worst nightmare actually came true,” she said later as she left a nearby park with her father. “This is it. I’m gonna die.”

Freshman Rosie Rodriguez said she was walking up the library stairs when she heard noises that “sounded like balloons” popping. She realized they were gunshots when she saw other students running.

Still carrying a backpack laden with books, she ran across the street to a home, where a person she didn’t know gave shelter to her and about 10 other students.

“I just heard a lot of kids crying. We were scared,” Rodriguez said.

“We never really thought this would happen in our school,” she said.

No details were released on a motive and his name was not released. Thursday was his birthday.

A video of the shooting showed the gunman shooting himself in the head. Authorities say he was carrying a .45 caliber handgun and used the last bullet on himself.

The two students who died were a 16-year-old girl and a 14-year-old male. Their names were not released.

Saugus High School and other schools in the area were locked down.

Television images showed deputies swarming the school and several people being moved on gurneys. Lines of students were escorted from the school by armed deputies.

Anxious parents were awaiting reunification with their children in a park near the high school.

Los Angeles County Undersheriff Tim Murakami has tweeted an apology to the parents, saying investigators needed to interview the students before they could be released.

Orandi said she has heard about so many school shootings that she always assumed she’d panic in such a moment.

But she said she stayed calm, thanks to the help of her teacher who locked down the classroom.

The shots rang out — “bang! pop!” — and Orandi said she heard people yelling and running. Students in the classroom started crying and hugging one another.

“I just couldn’t believe it was happening,” Orandi said.

She was escorted from the classroom to the school gym and later picked up by her father Hamid Orandi.

“She burst out crying like crazy, but I felt better because I knew the danger was gone,” he said. “It’s one of those random things you always have to worry about.”

His daughter said she would probably go home and vomit from the stress.

Student Sharon Orelana Cordova told KNBC-TV she hid under a table in a nurse’s office until officers came to get her.

“When I got out, I saw this person lying on the ground ... with blood all over,” she said.

Shooting at Florida high school; no. of wounded unclear