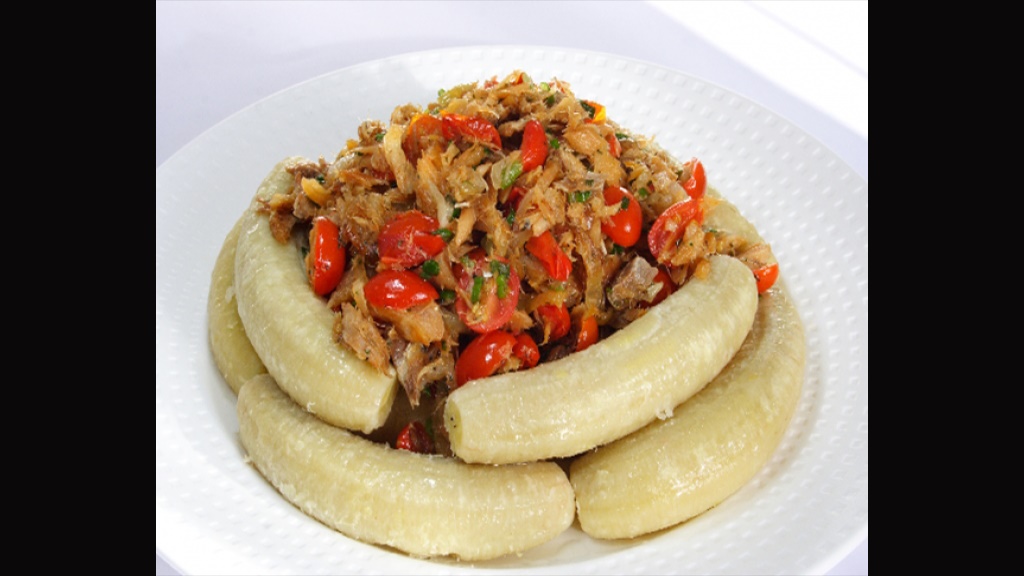 If you’re looking to explore Saint Lucia’s culture, the best way to start is with the food.

Apart from the many tourist attractions and adventures, the island is highly regarded for its delectable foods which is a mixture of West Indian influences, a bit of French flair and a pinch of African and Indian spices.

The food is always loaded with flavors and made from fresh fruits and vegetables grown on the island.

We have put together a list of five mouth-watering Saint Lucian foods you absolutely need to savor. Saint Lucia is indeed a food lovers’ paradise.

Green fig (green banana) and saltfish (salted cod) is the national dish of Saint Lucia and is an absolute must have. In this dish the figs are peeled and boiled in saltwater. The salt fish is also boiled just enough to wash away the correct proportion of salt then flaked and sautéed with local peppers, thyme, chives, onions and other herbs and spices. There are different variations of this dish. Some people serve the green fig with the saltfish on top paired with cucumber salad and/or avocados while others serve it in the form of a salad. Either way it is super delicious!

This local favorite is a spinach-like soup made from a vegetable leaf called callaloo. Originating from West Africa, the soup is made of callaloo leaf with seasoned meat, garlic, potatoes, onions, okra and coconut milk. Variations on the traditional recipe might include crab, conch and fresh lobster.

One pot or bouillon

There isn’t one person in Saint Lucia who doesn’t like a good bouillon or one pot. It is traditionally made with salted pig tail or snout but variations are made with seasoned chicken most times cooked in lentils or red beans or seafood with a combination of dumplings, coconut milk, spices, spinach, cabbage, okra, ground provisions such as dasheen, green bananas, green plantains and the list goes on. One of the best meals you can have on island. It is a delicious mouth full and surely a belly full.

A very popular breakfast dish especially during Easter and Jounen Kweyol. Saltfish accras are fried fish cakes made from salted cod and mixed spices. These crispy, spicy delights are often prepared by firstly deboning and boiling the saltfish several times until the desired amount of saltiness, which is then mixed with scotch bonnet peppers, a wide variety of spices and creole seasoning along with egg, pinch of sugar and backing powder (optional), flour and water. Finally, the accras are shaped and put into a frying pan with vegetable oil for frying. If you haven’t tried accras you are missing out on some amazing treats!

Another Lucian favorite. I would sell my soul for a sip of this distinctive tasting drink, that’s how much I love it. It is made from cocoa stick which is manufactured on island grated and added to boiling water along with a mixture of spices namely nutmeg, cinnamon, star anise and bay leaf and milk. Some islanders add flour to thicken it up while others prefer it with just the milk. Either way it is heaven in a cup!

In addition to all these foods mentioned above, you can try out lambi, breadfruit and saltfish or smoked herring, local black pudding, local bread, hot bakes and cassava bread all extremely tasty foods to get your taste buds tingling.

Fall in love with vegan food at Grassroots Vegan Cuisine