After deadly crashes of marquee aircraft, Boeing CEO is out 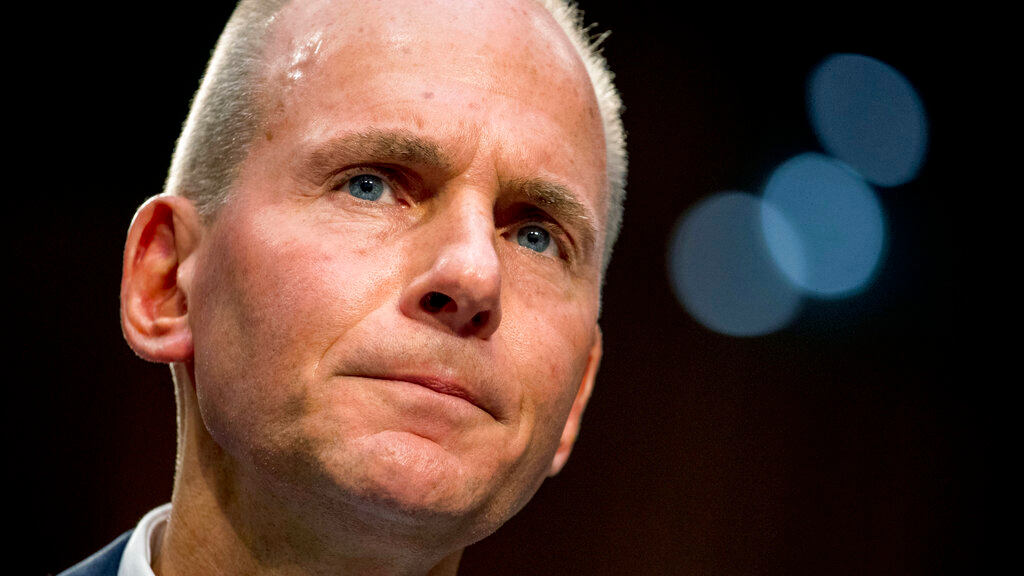 Boeing's CEO is stepping down with no end in sight for a crisis that has enveloped the manufacturer and its marquee aircraft, the Max 737.

The Chicago manufacturer said Monday that Dennis Muilenburg will depart immediately. The board's current chairman David Calhoun will officially take over on January 13.

The Max was grounded worldwide after two crashes — one in October 2018 off the cost of Indonesia and another in March 2019 in Ethiopia — which killed a combined total of 346 people. The company's board said a change in leadership is needed to restore confidence in the company as it works to repair relationships with regulators and stakeholders.

"This is something that we have been asking and struggling for quite some time," said Ababu Amha, who lost his wife, an flight attendant, in the second crash involving an Ethiopian Airlines aircraft. “The CEO reluctantly and deliberately kept the aircraft in service after the Lion Air crash. The Ethiopian Airlines crash was a preventable accident.”

The resignation, however, is not enough, Amha said. “They should further be held accountable for their actions because what they did was a crime."

The Max is crucial to Boeing and it's been unable to get approval from regulators to put the plane back in the air. Sales at Airbus, Boeing's top rival, surged 28 percent during the first half of the year.

Investigators say that in both crashes, a faulty sensor caused the plane's MCAS system to push the nose of the plane down and pilots were unable to regain control.

Boeing declined to make Calhoun or other executives available Monday. An email to employees said Greg Smith will serve as interim CEO. “This has obviously been a difficult time for our company, and our people have pulled together in extraordinary ways,” Smith said in the email.

Earlier this month, the head of the Federal Aviation Administration expressed concern that Boeing was pushing for an unrealistically quick return of the grounded 737 Max.

Calhoun says he strongly believes in the future of Boeing and the 737 Max.

Boeing said last week that production of the Max would be wound down in January. The shutdown will likely ripple through Boeing's vast network of 900 companies that make engines, bodies and other parts for the 737.

Then United Airlines said it would pull the Boeing 737 Max from its flight schedule until June. The same day, Spirit AeroSystems, which makes fuselages, said it would end deliveries intended for the Max in January, and Boeing's new Starliner capsule went off course on a planned trip to the International Space Station.

Board member Lawrence Kellner will become non-executive chairman of the board.

"On behalf of the entire board of directors, I am pleased that Dave has agreed to lead Boeing at this critical juncture," Mr. Kellner said in a prepared statement. “Dave has deep industry experience and a proven track record of strong leadership, and he recognises the challenges we must confront. The board and I look forward to working with him and the rest of the Boeing team to ensure that today marks a new way forward for our company.”

The crashes and the decisions that were made leading up to those tragedies have shaken Boeing.

“The company appears to have known about safety issues for quite some time. This indicates that there might be more fundamental cultural issues at the company,” said Tim Hubbard, assistant professor of management at the University of Notre Dame’s Mendoza College of Business. “Furthermore, the recent failure of a rocket test launch indicates that the company might not be as innovative as they once were. Increasing innovativeness and changing the culture of a company the size of Boeing is challenging. One way to jumpstart changes at Boeing could be new leadership.”

Boeing's new Starliner capsule ended up in the wrong orbit after lifting off on its first test flight Friday, a blow to the company's effort to launch astronauts for NASA next year.

Trades of Boeing shares were halted before the announcement but the stock jumped three percent after the opening bell.

Muilenburg’s departure was long overdue, said Robert Clifford, a Chicago lawyer representing several people who are suing Boeing after losing relatives in the second crash, which occurred March 10 in Ethiopia.

“Mr. Muilenburg and other Boeing leaders deliberately put the desire for a heightened stock price and profits over safety by allowing the 737 Max 8 to stay in service after the Lion Air crash” in October 2018, Clifford said. Boeing directors, he said, deserve no praise for ousting Muilenburg now.

Boeing to halt production of 737 Max airliner in January