After trip's final day, Trump to return to tumult at home 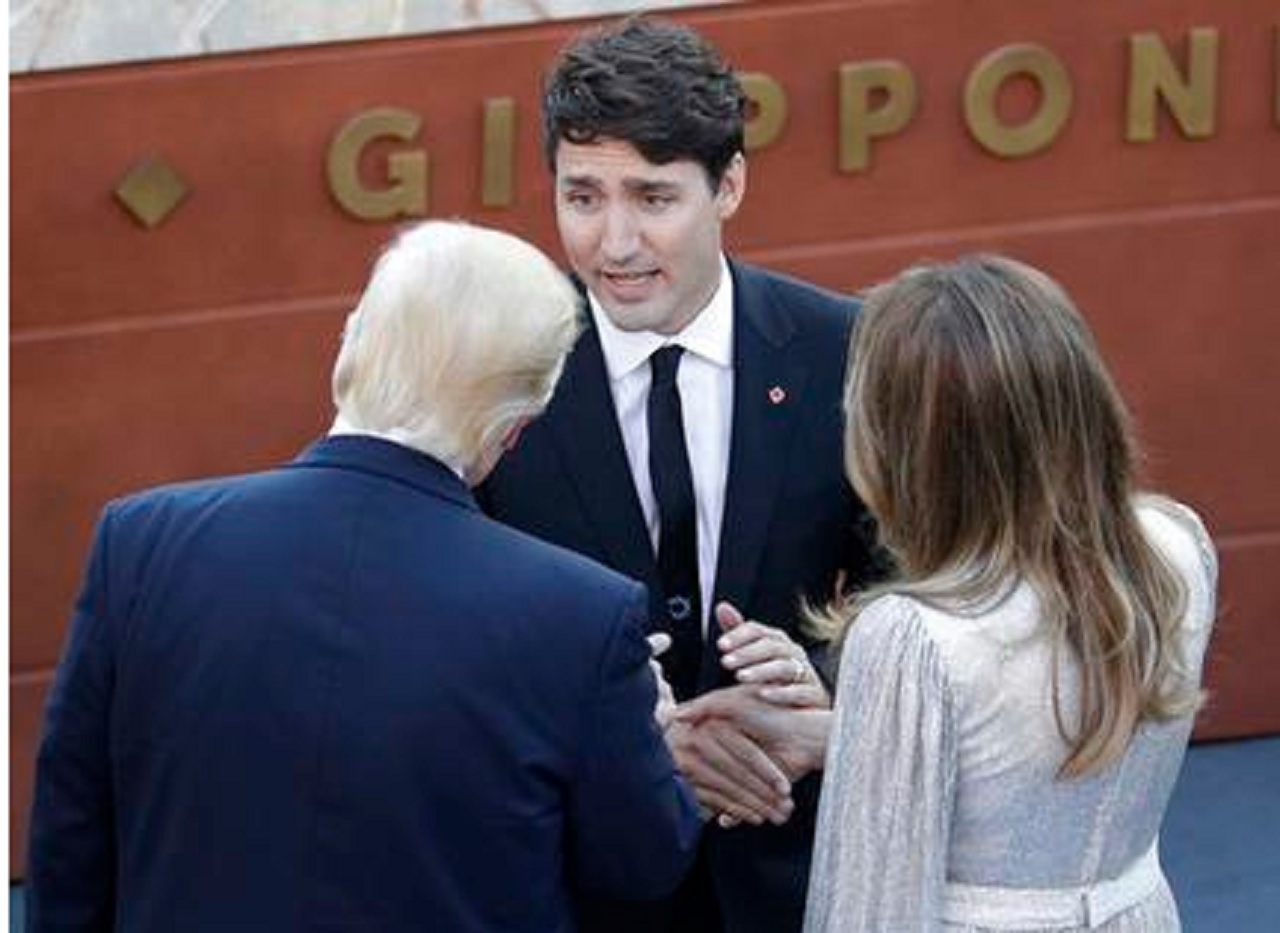 U.S. President Donald Trump and First Lady Melania, talk with Canadian Prime Minister Justin Trudeau as they arrive for a concert in the Ancient Theatre of Taormina ( 3rd century BC) in the Sicilian citadel of Taormina, Italy, Friday, May 26, 2017. Leaders of the G7 meet Friday and Saturday, including newcomers Emmanuel Macron of France and Theresa May of Britain in an effort to forge a new dynamic after a year of global political turmoil amid a rise in nationalism.

Down to the final day of his lengthy first international trip, President Donald Trump will lift off for Washington having rattled some allies and reassured others, returning to a White House that sits under a cloud of scandal.

Trump started Saturday at the second day of the G-7 summit in Sicily, bringing to an end a nine-day trip that started in Saudi Arabia and Israel before moving on to three European stops. The trip has largely gone off without a major misstep, with the administration touting the president's efforts to birth a new coalition to fight terrorism, while admonishing partners in an old alliance to pay their fair share.

"Many NATO countries have agreed to step up payments considerably, as they should. Money is beginning to pour in- NATO will be much stronger," he said. Trump was referring to a vow by NATO countries to move toward spending 2 percent of their gross domestic product on defense by 2024. Only five of NATO's 28 members meet the target: Britain, Estonia, debt-laden Greece, Poland and the United States, which spends more on defense than all the other allies combined.

There is no evidence that money has begun to "pour in" - and countries do not pay the U.S. or NATO directly. But Germany, for instance, has been increasing its defense spending with the goal of reaching the 2 percent target by 2024.

After the pomp of presidential travel overseas, Trump will return to Washington to find the same problems that have dogged him.

As a newly appointed special counsel is beginning his investigation into links between the Trump campaign and Russian officials, Jared Kushner, the president's son-in-law and close adviser, has become a focus of the probe, according to The Washington Post. His lawyer said Kushner will cooperate with investigators.

James Comey, the former FBI director leading the Russian probe until Trump abruptly fired him, is still expected to testify before Congress about the memos he kept on conversations with the president that involved the investigation.

The search for a new FBI director continues.

And Trump's policy agenda has run into problems. The GOP health care bill that passed the House faces uncertain prospects in the Senate, after a Congressional Budget Office analysis that it would leave 23 million more Americans uninsured by 2026. The president's budget was widely criticized for deep cuts to safety net programs. And some are starting to question the chances for tax reform.

But first Trump has one more day in Sicily, which will include discussions of global economy and climate, a meeting with small African nations - Trump will be seated between the leaders of Niger and Tunisia - and migration issues. After the G-7 summit of economically advanced countries, the president will address American troops on an Italian base before departing for home.

Not yet on the agenda: a news conference.

If that holds, Trump will break with presidential precedent by not holding at least one lengthy question-and-answer session with the press while abroad. Anxious about Trump's tendency to make things worse for himself with unscripted remarks, the White House staff has kept the president a safe distance from journalists for most of the trip.

Trump was warmly welcomed in the Middle East, but in Europe he's faced a far cooler reception. He's been willing to risk disapproval, engaging in an extraordinary scolding of close allies over their responsibility to pay for mutual defense. But true to form, on Friday Trump also showed that he might be willing to deal.

While Trump is demanding that the world's wealthiest nations to do more to fight terror, he's also listening to their urgings about the need for the U.S. to remain in the sweeping Paris climate agreement. As a candidate Trump denounced the deal, but has since said he's waiting to make a final decision.

"His views are evolving, he came here to learn and get smarter," said Gary Cohn, national economic council director, when asked about the president's views on the climate agreement. Cohn would not commit to a timetable for a decision. National Security Adviser H.R. McMaster, who appeared with Cohn at a briefing late Friday, quickly jumped in to reiterate that Trump would make a decision based "on what's best for the American people."

Other G-7 nations leaned heavily on Trump to stay in the deal, with German Chancellor Angela Merkel saying "we put forward very many arguments."

Trump took part in the ceremonial spectacle of the summit, this time at a picturesque Sicilian town above the Mediterranean Sea. But he also held one-on-one meetings with the leaders of Japan, the United Kingdom and Germany. The meeting with Merkel came just a day after Trump reportedly called Germans "bad." Cohn stressed Friday that the president was simply being critical of the U.S. trade deal with Germany.

Trump also understands that Germany is bound by the rules of the European Union and could not unilaterally change its trade policies, Cohn said. Trade was a big topic, with Cohn saying the United States' guiding principle will be "we will treat you the way you treat us," suggesting that retaliatory tariffs could be imposed.