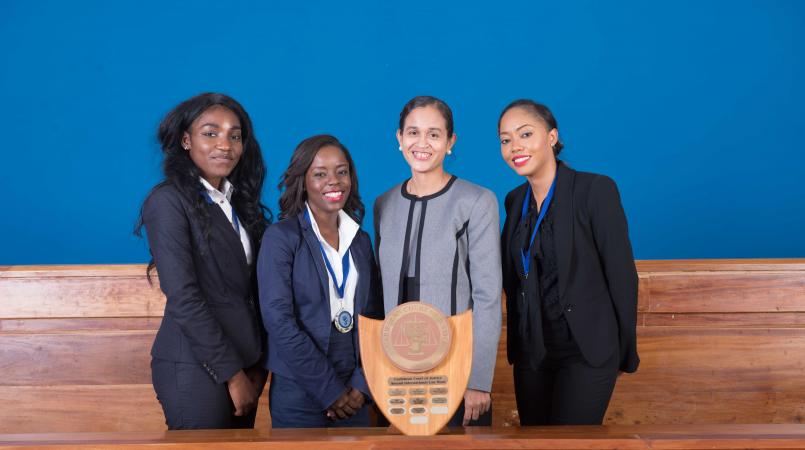 1. Faculty of Law of the University of Technology (Jamaica);

2. Faculty of Law of the University of Guyana;

3. Faculty of Law of the University of the West Indies (St Augustine);

4. Faculty of Law of the University of the West Indies (Mona Campus);

5. Faculty of Law of the University of the West Indies (Cave Hill);

The Caribbean Court of Justice’s Annual International Law Moot Court Competition was inaugurated in March 2009, to encourage budding attorneys to become familiar with the Revised Treaty of Chaguaramas (RTC), and other areas of Community and International Law.

The CCJ’s Law Moot provides the law students with the opportunity to appear and present before the region’s highest court on original jurisdiction matters. The Original Jurisdiction of the CCJ gives the Court the sole authority to interpret and apply the rules set out in the RTC, which governs the CARICOM Single Market and Economy (CSME).

This year’s fictitious case dealt with issues surrounding the freedom of movement within the Caribbean region of a Belizean-based company with shareholders and employees of varying nationalities. Arguments were presented before a panel of CCJ Judges: the Honourable Messrs. Justice Nelson, Wit and Hayton. In his opening remarks, The Rt. Honourable Sir Dennis Byron, President of the CCJ spoke of the benefits of the moot:

“The good news is that your delving into the inner workings of the RTC and thrashing out an Original Jurisdiction matter before this very CCJ does more than provide you with an opportunity to hone your adversarial skills. Through the very process of your investment and your praxis, the Court itself is imbued with a greater strengthening of its ethos, of its armour, of its structure and is better fortified assuring that leadership role...”

The Court Judges and the court’s spectators were quite impressed by the submissions and presentations of each team. The Hon. Mr. Justice Nelson commented: “These submissions indicate that Caribbean region is in good hands!”.

Second place was awarded to the team from the Norman Manley Law School, and the University of the West Indies, Cave Hill Campus copped the title “Best Academic Institution”.