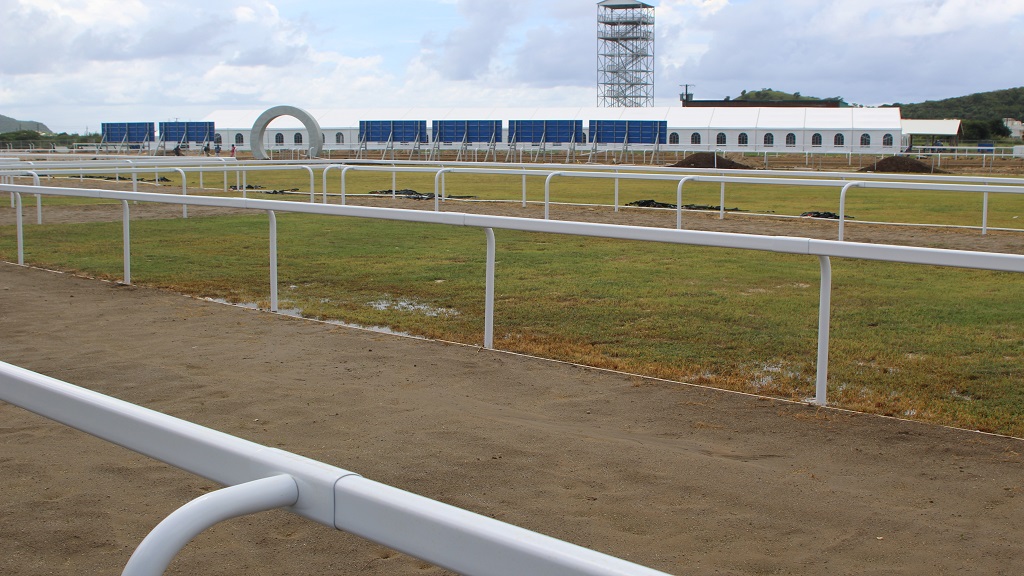 A wider view of the horse track

Almost everything is in place for the first-ever thoroughbred horse race in the country.

One of the December races has been dubbed ‘The Richest Race’ in the Caribbean, that is the race known as ‘The Pitons Club’ where the winner gets a purse of US$150,000.

Forty thoroughbreds were flown in from the United States to Saint Lucia by the Royal Saint Lucia Turf Club for the races. They were put on sale to Saint Lucians each with a price tag of US$20,000. While to date it cannot be said how many horses have been sold, that information not forthcoming, several deposits of EC$500 have already been collected, according to Eden Harrington, director of the Club.

Information about the races and the betting system, which is legislated, are now being pushed into the public domain in an effort to brighten whatever dark or grey spots that may still linger in the minds of Saint Lucians regarding aspects of the aforementioned.

A side view of the barns/stables

For instance, the Club is using the races as a draw for Americans and Europeans looking for an escape from the cold temperatures of snow and ice they are currently experiencing, while at the same time promoting the region-wide appeal the races claimed to have been getting by stating that shipments of horses from the USA, Trinidad, Jamaica and Barbados have begun arriving in Saint Lucia from last month.

Local horses will also participate in the races dubbed “Pitons Cup” which will see 12 players vying for the US$150,000 that is up for grabs. The race promoter, which is the Royal Saint Lucia Turf Club, says that this year’s edition draws particular inspiration from the 2015 CECF Singapore, which coupled social responsibility and business networking with the richest day of racing in Singapore’s history.

The Pitons Cup, it is said, is expected to draw the participation of racehorses, owners and trainers from across North America and the wider Caribbean when it anchors the Club’s maiden race on December 13, 2019. It has been further said that the Pitons Club and CECF Saint Lucia is significant because it’s the inaugural launch of the world’s newest thoroughbred industry, it expects support from the international racing community and is only the second CECF outside of China after 2015 CECF Singapore.

Entry fees for the December races are already being advertised. There will be a VIP marquee to accommodate up to 400 persons with invitations only. The secondary marquee comes with a fee of US$250.00 while the regular places come with a fee of US$10.00 US or EC$$25. Children under 5 get in free. 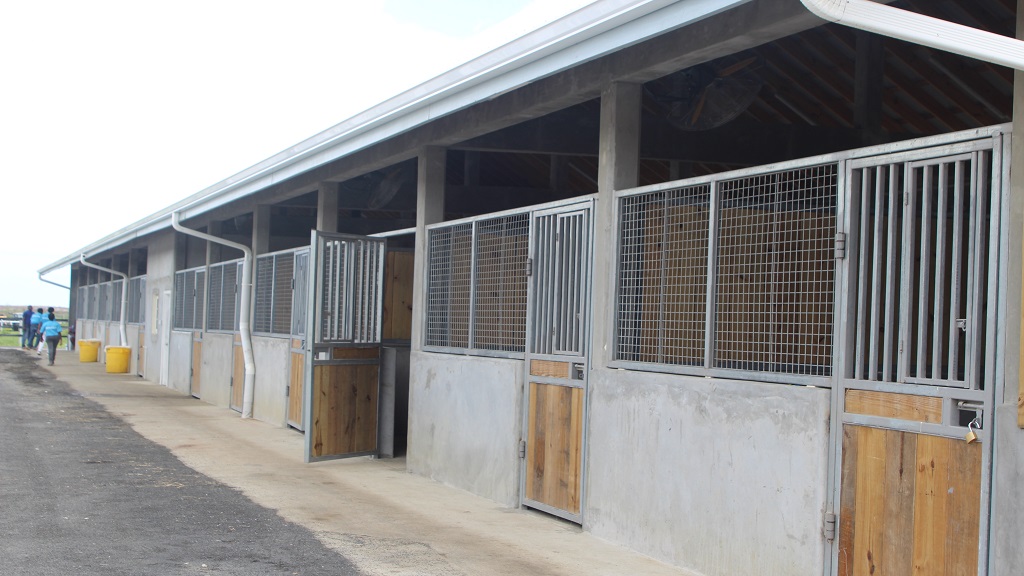 A view of the barns/stables housing the horses, there are over 100 of them

There is also a strict dress code for the designated places of assembly and a list of things that cannot or should not be brought into the arena, for example, alcohol, coolers, food, grills and tents; traditional backpacks and school bags; firearms, weapons and pets.

The system of betting on the five races to take place in just about a month’s time has been taken care of with bets starting as low as one dollar.

The betting rules were recently approved by the Racing & Betting Committee of Saint Lucia and are to govern the conduct of all betting on horse racing.

Part of the dirt track ready for the races

The Committee may amend the rules from time to time which has been made subject to the Gaming, Betting and Racing Act of Saint Lucia.

According to the betting procedure, all bets must be made and settled in Eastern Caribbean Dollars, unless otherwise declared by the betting operator. All bets must be paid in cash or through an accredited betting account affiliated with the Operator.

No valid bet shall be withdrawn. And a bet shall only become valid if it has been duly processed by the Operator in accordance with the rules and also included in the official records. A Bet has not been processed unless the stakes money has been accepted by the Operator and/or debited from a Betting Account.

Also, the eligibility for a dividend, refund and/or rebate of a valid bet shall be determined by reference to the official record of the bet and by the information included on the physical betting ticket.

Any Bet declined or not accepted by the Operator shall not constitute a valid bet. Minimum permitted bets and betting units apply. All Bets must be confirmed in the system together with full bets paid not later than the start of the race (the ‘Off Time'). All Bets must be paid in full at the time of transaction. The inability to pay for a Bet in full at the time of transaction will automatically result in a void bet.