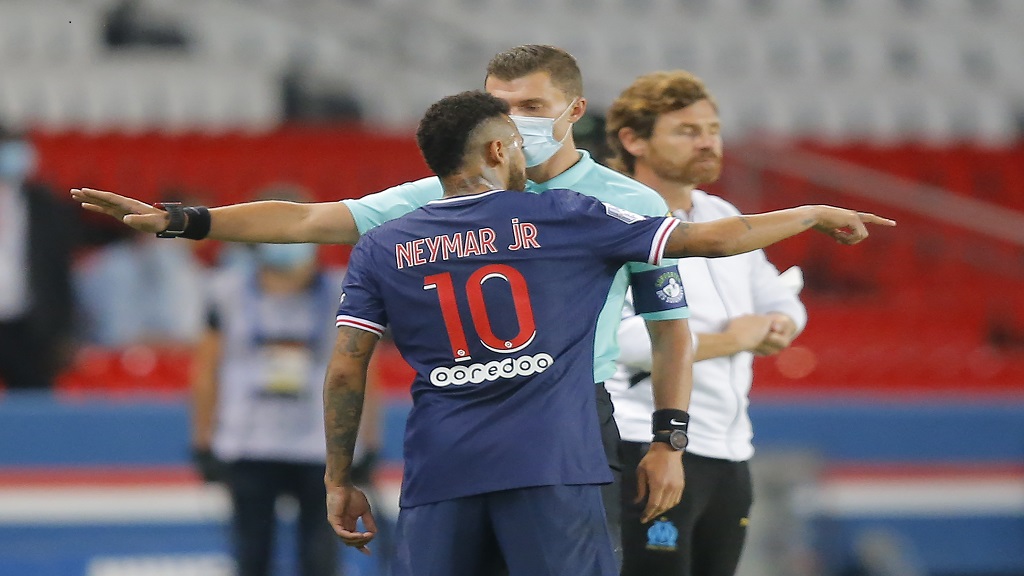 PSG's Neymar argues with the fourth official as he leaves the pitch after getting a red card during the French League One football match against Marseille at the Parc des Princes in Paris, France, Sunday, Sept.13, 2020. (AP Photo/Michel Euler).

Andre Villas-Boas has expressed alarm that Alvaro Gonzalez and his family received abuse including death threats after Marseille's win at Paris Saint-Germain.

Spanish defender Alvaro was involved in the stormy ending to Sunday's Classique, with Neymar sent off for striking him on the back of the head as five players were red-carded in stoppage time.

Neymar explained the incident by alleging he was subjected to a racial slur, saying on Twitter that his only regret was not hitting his opponent in the face.

Marseille are standing by their player, insisting he is not racist and stressing he has the support of team-mates. Alvaro denies making such a slur.

The south-coast club announced on Monday that the leaking of private telephone numbers belonging to Alvaro and his relatives led to "constant harassment, consisting in particular of death threats".

Speaking in a news conference on Tuesday, head coach Villas-Boas said: "The death threats are true. We told the police about them.

"These are the consequences of the accusations. I hope it will end soon."

The pair exchanged messages on Twitter after the game, with Neymar telling Alvaro he has no respect for him.

Villas-Boas appears to want Neymar to retract his accusation, which may be unlikely given how strongly the Brazilian expressed his views initially and has since stood by them.

The Marseille boss urged Neymar to consider the consequences of his allegations towards Alvaro.

"We are sure that Alvaro is not racist," Villas-Boas said, according to L'Equipe.

"OM represents multiculturality. I think that we will all help to seek the truth.

"It is not good for Alvaro. It is a sensitive subject. OM and PSG are there to help seek the truth."