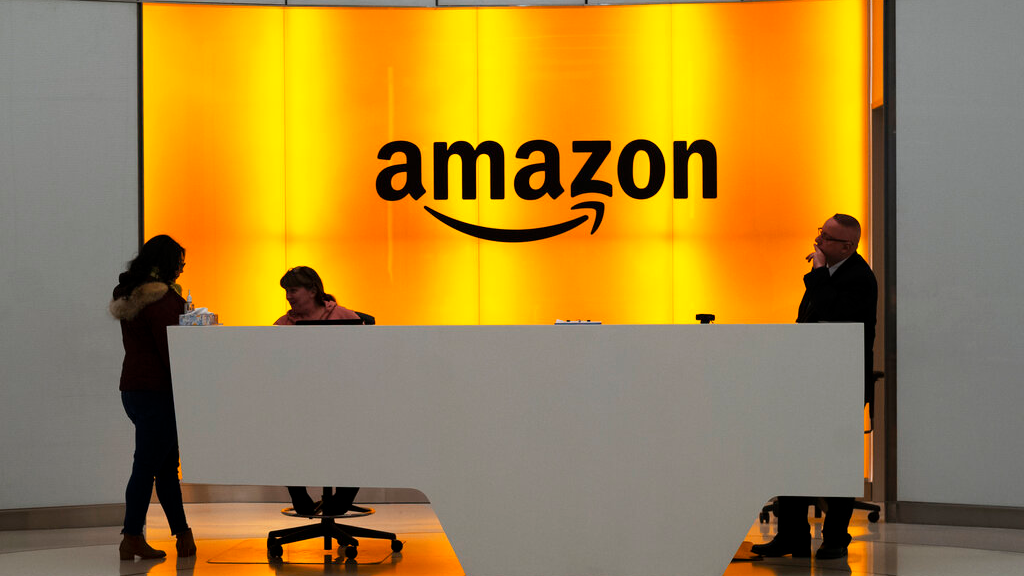 FILE - In this Feb. 14, 2019 file photo, people stand in the lobby for Amazon offices in New York. Amazon is providing a tool that will allow brands to remove listings from its site themselves that they consider to be for counterfeit goods. The online giant is also launching a product serialization service, which allows brands to put unique codes on their products during the manufacturing process. The codes are then scanned by Amazon to confirm authenticity once purchased. (AP Photo/Mark Lennihan, File)

Amazon, which has wrestled with counterfeit products on its site for years, has developed a fleet of tools that allow sellers to remove items from Amazon.com themselves and to prevent fake goods from making it to the site at all.

To speed the removal process, Amazon said that it's now allowing some companies to remove those goods themselves, rather than reporting fake goods that had been removed previously only after an investigation by Amazon.

In addition, the company has created unique serial codes that can be placed on products during the manufacturing process, which can then be monitored by Amazon on its site.

Amazon has also been testing automated technology that it said can prevent 100 times the number of counterfeit products on its site by scanning logos, trademarks and other key data. The company said it's now scanning more than 5 billion products daily for tell-tail signs of counterfeiting.

Amazon.com Inc. announced the anti-counterfeit program, called Project Zero, on its blog Thursday. While the project is currently invite-only, the Seattle company said that it's working to add more brands quickly.