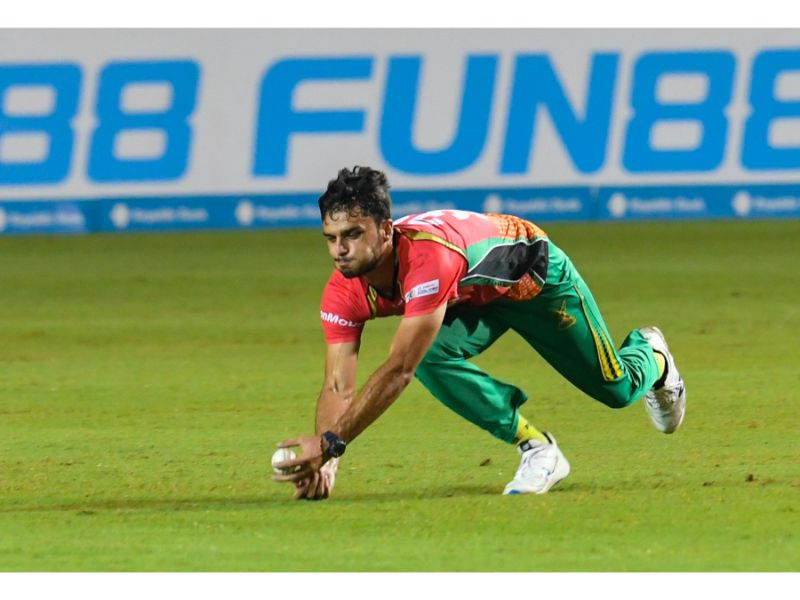 Shimron Hetmyer's explosive half-century took the Guyana Amazon Warriors to a comfortable seven-wicket over the St Lucia Zouks on Wednesday night at the Brian Lara Cricket Academy in Tarouba.

Hetmyer stroked his third fifty of the 2020 Caribbean Premier League in getting to 56 not out off 36 balls.

He hit two sixes and three fours off the first five balls of the 10th over, bowled by Chemar Holder, to remove any doubt about his return to top form.

Earlier, the Amazon Warriors, after asking the Zouks to bat, turned in a disciplined bowling performance to limit the St Lucia franchise to 109/7 in their 20 overs.

Javelle Glen top-scored with 23 not out, batting af number 8, after the top- and middle-order failed to negotiate the wiles of the Amazon Warriors bowlers.

Imran Tahir also started with a maiden, leaving the Zouks 15/2 after four overs.

Cornwall hit two fours off Naveen, driving him over his head then pulling him, but when the opener mistimed a Romario Shepherd cutter Naveen pulled off an excellent catch diving forward.

Cornwall had hit 20 in four shots, but the Zouks only scored off six other deliveries to end the Powerplay at 27/3.

Green raced through an over for just two, and Tahir was unlucky not to get a wicket in an over that yielded only four.

Najibullah at last middled one, pulling Sinclair hard for a Hero Maximum, and at halfway the Zouks were 47/3.

Najibullah and Kavem Hodge managed to hustle eight off Green’s last over, but Hodge soon got stuck which put pressure on Najibullah, who tried to attack Tahir but under-edged a googly to keeper Nicholas Pooran.

Keemo Paul bookended his first over with wickets, starting with Hodge under-edging through to Pooran and ending with Zouks captain Daren Sammy falling LBW for another low score.

At 59/6 off 13, the Zouks were in need of a rescue mission. Mohammad Nabi and Javelle Glen survived Tahir’s last over, Paul’s second over like his first went for just two, and while Nabi clubbed Shepherd for four through cover that was the first boundary in 34 balls.

Entering the last four overs, the Zouks were 72/6. Nabi steered Naveen past point for four, but Naveen foxed him with a pair of slower balls to put the onus on Nabi to attack.

Nabi mistimed his drive and holed out to Sinclair at deep cover.

Glenn got his first boundaries, both edged past short third man off Paul, as the Zouks finally managed a double-figure over to reach 89/7 off 18.

Naveen dropped short and was pulled for four to go for 11 off the last over of an otherwise excellent spell, and Glenn smoked a cover drive in the last over.

But Paul recovered well to ensure that was the only boundary off the 20th, and the Zouks total felt some way under par.

Scott Kuggeleijn sprayed wides both sides of the wicket in a nine-ball first over that somehow only went for five.

The Amazon Warriors’ intention to attack the Powerplay was clear, as Chandrapaul Hemraj started Nabi’s first over by smashing a Hero Maximum and King closed it by square driving for four.

Brandon King was bowled attempting a ramp over fine leg, but the aggression continued with Hetmyer slashing for four.

Hemraj ruined a potential Nabi maiden with a Hero Maximum over long-off, and Hetmyer dismissed a Kuggeleijn long-hop through point for four. Cornwall closed the Powerplay tidily, but after six overs the Warriors were comfortable at 38/1.

Hemraj clipped Kesrick Williams fine for four to take the required run rate below five an over.

Hetmyer seized on Cornwall’s first poor ball, hammering a Hero Maximum over midwicket, and the Amazon Warriors ticked along to 55/1 off eight overs but soon after Hemraj was bowled by Nabi off both pads.

Hetmyer attacked Chemar Holder mercilessly, pulling his first two balls for Hero Maximums and following up with three fours in a row - a majestic cover drive on the up, a rasping square cut and a punch over mid-off - to rocket the Warriors to 82/2 and himself to 46 after 10 overs.

A 24 run over had reduced an already simple chase to a stroll.

Nabi finished his spell tidily, but while Sammy showed faith in Holder, Pooran continued where Hetmyer had left off with a glorious check-driven four.

Hetmyer followed suit to bring up a third fifty of Hero CPL 2020 off just 33 balls, and after 12 overs the Amazon Warriors were 94/2 and needed just 16 to win.

Pooran walloped Glen through midwicket for four but fell next ball reverse-slapping to cover where Boucher took a good low catch.

The winning moment was a bye, but the job had been done by the bowlers and Hetymer, and with three straight wins the Amazon Warriors look to be gathering steam.

The Zouks had already qualified for the semis, but the top order will need to step up if they are to win Hero CPL for the first time.

Such was the margin of victory that the Amazon Warriors jumped into second place, and who knows how important that could be come the semi-finals.