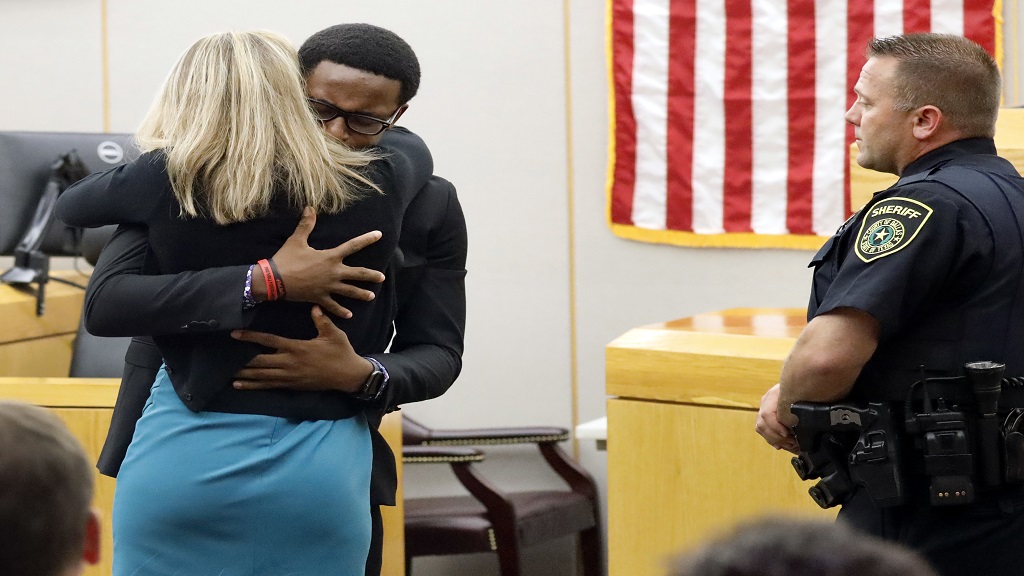 The brother of a black man who was shot dead by a white Dallas police officer who said she mistook the victim’s apartment for her own forgave and embraced her Wednesday as she sobbed after being sentenced to a decade in prison.

As people outside of the courtroom reacted angrily to the 10-year sentence given to Amber Guyger for killing Botham Jean in his apartment, believing it was too lenient, his brother was allowed to address her directly from the witness stand.

Brandt Jean told Guyger that he thinks his brother would have wanted her to turn her life over to Christ, and that if she can ask God for forgiveness, she will get it.

“I love you as a person. I don’t wish anything bad on you,” he said to the 31-year-old Guyger, before adding, “I don’t know if this is possible, but can I give her a hug?”

The judge said he could, and Brandt and Guyger stood up, met in front of the bench and embraced while Guyger cried.

Jurors could have sentenced the former officer to up to life in prison or as little as two years, but prosecutors asked them to send her to prison for 28 years, which is how old Botham Jean would have been if he was still alive.

The 10-year sentence, which will make Guyger eligible for parole after five years, was met with boos and jeers by the crowd outside of the packed courtroom, with one woman saying, “It’s a slap in the face.”

Speaking to reporters after the hearing, Jean’s mother, Allison Jean, criticized the investigation into her son’s death, saying “the corruption that we saw during this process must stop” and that it’s up to the people of Dallas to bring about change.

She also criticized Guyger and the police training to shoot to kill.

“If Amber Guyger was trained not to shoot in the heart, my son would be alive today. He was no threat to her. He had no reason to be a threat to her, because he was in his own apartment,” Allison Jean said.

Guyger's supporters defend her ahead of sentencing