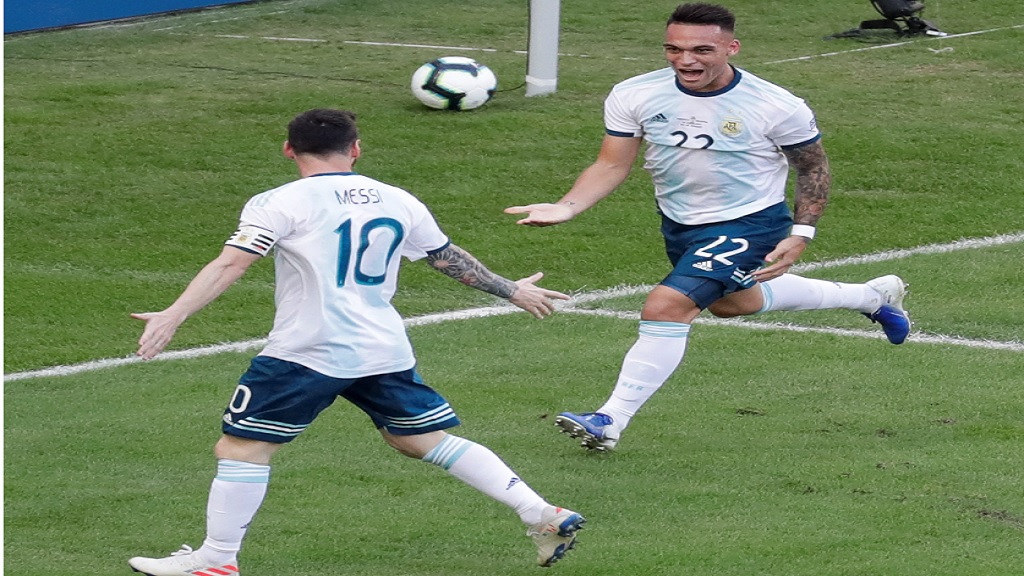 Lionel Messi was shackled and yet Argentina flourished to beat Venezuela 2-0 on Friday and set up a Copa América semifinal against Brazil.

Marked closely by Venezuelan defenders, Messi failed to impress at Maracanã Stadium, but his teammates took advantage to give their most solid performance in four matches.

Brazil and Argentina will face off on Tuesday at Belo Horizonte's Mineirão Stadium. The Brazilians advanced on Thursday after beating Paraguay on penalties.

The nearly 50,000 Brazilian and Argentine fans at Maracanã hinted at how intense the atmosphere will be on Tuesday. The Brazilians jokingly sang about Messi's lack of titles for his national team, while Argentines poked fun by singing Diego Maradona is better than Pelé.

"We have to play in the same way we have, and not thinking it is our archrival," Argentina coach Lionel Scaloni said about the upcoming clash. "It will be a match for the people of football to live. Not as much for us on the bench."

Striker Lautaro Martínez, who was chosen man of the match, scored from a back heel kick after 10 minutes, deflecting a shot by Sergio Agüero from the edge of the box.

Another blocked shot by Agüero led to midfielder Giovani Lo Celso doubling the lead in the 74th.

Lo Celso, who entered just a few minutes before, just pushed the ball into the empty net to seal Argentina's win.

"Brazil will be a very tough rival, and that isn't only because they will play at home," Lautaro said.

"We had an amazing first half. We are showing that in every match we give it all."

Argentina, back for the first time in the stadium where they lost the 2014 World Cup final 1-0 to Germany, were the only team trying to score in the beginning of the quarterfinal and managed to do so when Lautaro converted their third clear chance.

Venezuela's first opportunity came only after 40 minutes, with a header by defender Jhon Chancellor.

The story of the match didn't change much in the second half, with a slower Argentina still enjoying the best chances.

At 71 minutes, shortly before Lo Celso scored Argentina's second, Venezuela striker Ronald Hernández was stopped by goalkeeper Franco Armani in the key save of the match.

"It was a very deserved win," Armani said. "We are growing in this tournament, always with confidence. This is a group of great people and great players."

Scaloni, yet to put out an unchanged lineup, bet on central defender Juan Foyth as right back to give his team more defensive stability, although Foyth failed to advance much to help up front.

Venezuela played without their two starting central defenders, Yordan Osorio, and Mikel Villanueva. Osorio had a fever and Villanueva suffered from muscular problems. They were replaced by Chancellor and Jose Rosales.

Venezuela coach Rafael Dudamel said it was bitter to be eliminated by Argentina in the quarterfinals again. That also happened in the 2016 Copa América Centenário.

"This defeat will not make us change anything," Dudamel said. "Without the ball we did very well. With the ball, I feel we are a little in debt today."

Dudamel added a Brazil-Argentina semifinal will be "good for the show."