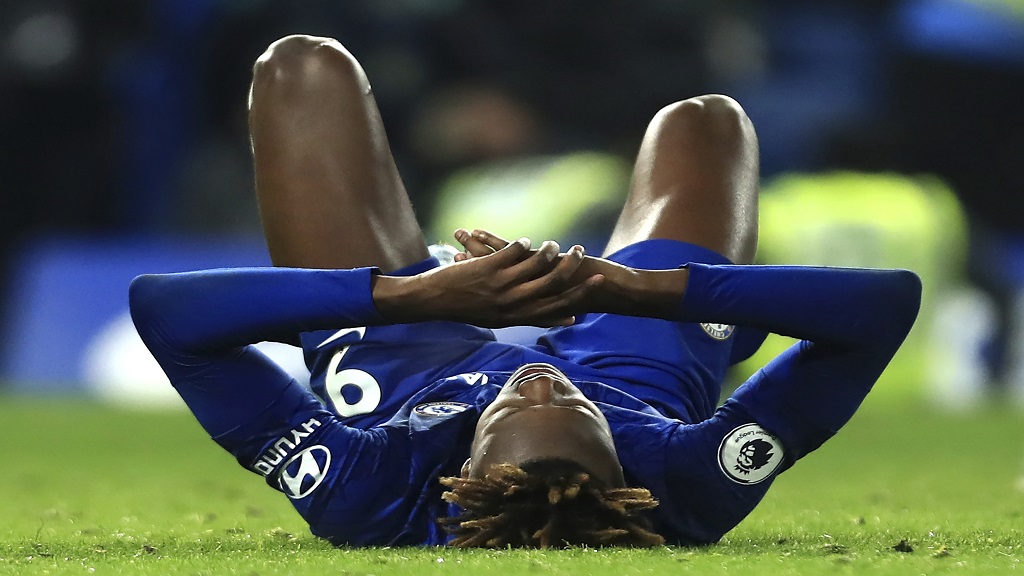 Chelsea's Tammy Abraham is seen on the ground after the end of the English Premier League football match against Arsenal at Stamford Bridge stadium in London England, Tuesday, Jan. 21, 2020. (AP Photo/Leila Coker).

Wins might still be in short supply for Mikel Arteta in Arsenal’s worst league campaign in a quarter of a century, yet some fighting spirit appears to have returned under the new manager.

On a night of late goals in the Premier League, Arsenal played with 10 men for more than an hour following David Luiz's 26th-minute red card and fell behind on two occasions at Stamford Bridge, yet still came away from a wild London derby with a 2-2 draw.

Arsenal finished the night in 10th place - and closer to the relegation zone than the top four - with nearly two-thirds of the season gone, yet possibly with some hope that better times might just be around the corner.

"Time will tell if this is a stepping stone,” said Arteta, who has just one win in six league games since taking over from Unai Emery last month, “but at least I saw a reaction. We have to keep playing with the spirit we showed, in every game.”

With just 14 points from their last 12 games, Frank Lampard’s fourth-place team is still within range of a bunch of challengers — potentially as far down as Arsenal, which haven’t finished outside the top six in 25 years. The sight of striker Tammy Abraham being helped off the field after the full-time whistle because a bang to the ankle was a further dampener on the night for Chelsea.

Chelsea only allowed two shots and conceded goals from both of them, the first to Gabriel Martinelli after an 80-metre run in which the Brazilian teenager was allowed to cruise past N’Golo Kante when the midfielder - having raced back to be the last man - slipped over near the center circle.

Hector Bellerin grabbed Arsenal’s second equaliser in the 87th, yet that was far from the latest goal on a chaotic evening around the country.

Newcastle defender Florian Lejeune scored in the fourth and fifth minutes of injury time to salvage an improbable 2-2 draw at Everton.

The first of the substitute defender's goals came from an overhead kick before he scrambled in an equaliser to capitalize on some poor defending by Everton.

The dramatic ending robbed the limelight from Moise Kean, who opened the scoring with his first goal for Everton since joining from Juventus in the offseason. Dominic Calvert-Lewin scored Everton's second in a match between two midtable teams

Another goal deep in injury time came at Villa Park, where Tyrone Mings scored in the fifth minute of stoppage time to earn Aston Villa a 2-1 win over Watford that lifted his team out of the relegation zone.

It also dropped Watford back into the bottom three, the first real setback for Nigel Pearson since he took over as manager last month with the team in last place.

Manchester City didn't leave it quite so late to seal their victory. A 73rd-minute goal from Sergio Aguero earned a 1-0 win at Sheffield United and consolidated second place, 13 points behind runaway leader Liverpool.

Aguero has now scored six goals in his last three games and is up to 16 in the league this season, putting him one behind top scorer Jamie Vardy of Leicester.

The game was also notable for the return from injury of City center back Aymeric Laporte, who played 78 minutes before being removed as a precaution after nearly five months out with a serious knee injury.

“We knew that Aymeric couldn't play for 90 minutes, that's why we played five at the back to protect him a little bit,” City manager Pep Guardiola said. “He's a crucial player for us, we've missed him.”

Bournemouth ended a four-game losing run in the Premier League by beating Brighton 3-1 to ease some of the pressure on manager Erddie Howe, whose side had collected just four points from its previous 12 matches.

Bournemouth stayed in the relegation zone but climbed to third-to-last place, level on points with West Ham in 17th.

Southampton won 2-0 thanks to long-range strikes by Nathan Redmond and Stuart Armstrong, and moved up to ninth place.