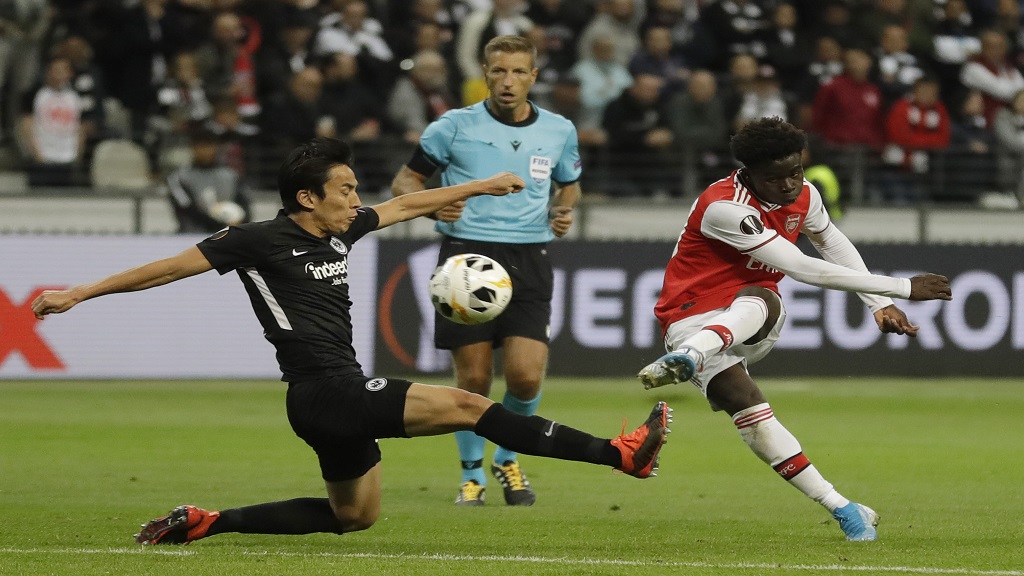 Arsenal and Manchester United both relied on a teenager to get their Europa League campaigns off to a winning start on Thursday.

Arsenal, last year's finalist, saw 18-year-old winger Bukayo Saka score one goal and set up the other two in a 3-0 away victory over 10-man Eintracht Frankfurt. And 17-year-old Mason Greenwood became United's youngest ever scorer in European competition when he netted the loan goal in a 1-0 victory over Astana at Old Trafford.

Sevilla, the most successful team in Europe's second-tier competition, also opened with a 3-0 victory at Qarabag while Kevin Bua struck twice to lead Basel to a 5-0 win over Krasnodar in Group C.

Another Premier League club, Wolverhampton Wanderers extended their winless streak by losing 1-0 to Braga at Molineux.

Here's a look at Thursday's games.

Arsenal manager Unai Emery started a trio of academy graduates, with Emile Smith Rowe, Saka and Joe Willock forming a youthful attack together with Aubameyang. It was the 20-year old Willock who opened the scoring in the 38th with a deflected right-foot shot from inside the area, which bounced off the crossbar and into the net.

Frankfurt chased an equalizer before midfielder Dominik Kohr was ejected 11 minutes from time after picking his second yellow card for a tackle on Saka.

The 18-year-old Saka — who like Smith Rowe was making his first start of the season — doubled the lead with a precise left-footer from outside the area in the 85th before setting up Pierre-Emerick Aubameyang to finish it off couple minutes later.

While Arsenal looked sharp up front, their defense look shaky throughout the game and Frankfurt missed a number of good chances to score — in part thanks to a couple of good saves from backup goalkeeper Emiliano Martinez.

Standard Liege started with a 2-0 win over Vitoria in the other Group F game.

Javier Hernandez broke the deadlock in Baku in the 62nd minute with a curling free-kick for Sevilla, the Europa League winners in 2014, 2015 and 2016.

In the highest-scoring game of the night, Luxembourg's Dudelange upset host APOEL Nicosia 4-3 in Group A.

Ole Gunnar Solskjaer's youth also impressed but the manager had to wait till the 73rd minute for Greenwood to score with a shot between the legs of Astana goalkeeper Nenad Eric. Two 19-year-olds, Angel Gomes and Tahith Chong, also started for United.

Rarely used midfielder Fred was also given his first start of the season and hit the bar three minutes into the Group L game.

The three-time European champions are back in the second-tier competition after finishing sixth in the Premier League last season.

The winners of the Europa League earn a place in the next season's Champions League.

Wolves returned to a European competition for the first time since the 1980-81 season, but couldn't shake off their poor domestic form.

Still without a win in the Premier League after five games, Wolves were punished for giving away possession in the 71st minute as Ricardo Horta finished off a counterattack with the only goal of the game for the Portuguese visitors. Wolves coach Nuno Espirito Santo is from Portugal, and so are seven members of his squad.

Slovan Bratislava defeated Besiktas 4-2 in the other Group K game.

In Group E, Romanian champion Cluj came from a goal down to beat Lazio 2-1. Ciprian Deac equalized against the run of play from the spot after defender Bastos gave Italy's cup winner the lead, before Billel Omrani scored the winner.

Celtic rescued a 1-1 draw at Rennes after Ryan Christie equalized from the spot in the 59th minute. M'Baye Niang had given Rennes the lead, also from the spot.

In Group B, Danish champion Copenhagen earned a 1-0 win over Lugano, while Dynamo Kyiv beat Malmo at home by the same score.

Francisco Soares' first-half goals lifted 2011 Europa League champion Porto to a 2-1 victory over Young Boys in Group G. Rangers, managed by Steven Gerrard, won 1-0 over Feyenoord, a Dutch side where another former star, Jaap Stam, is in charge.

Arsenal battle back to draw 2-2 against Tottenham