Ashes 2019: Buttler holds up Australia after Marsh makes his mark 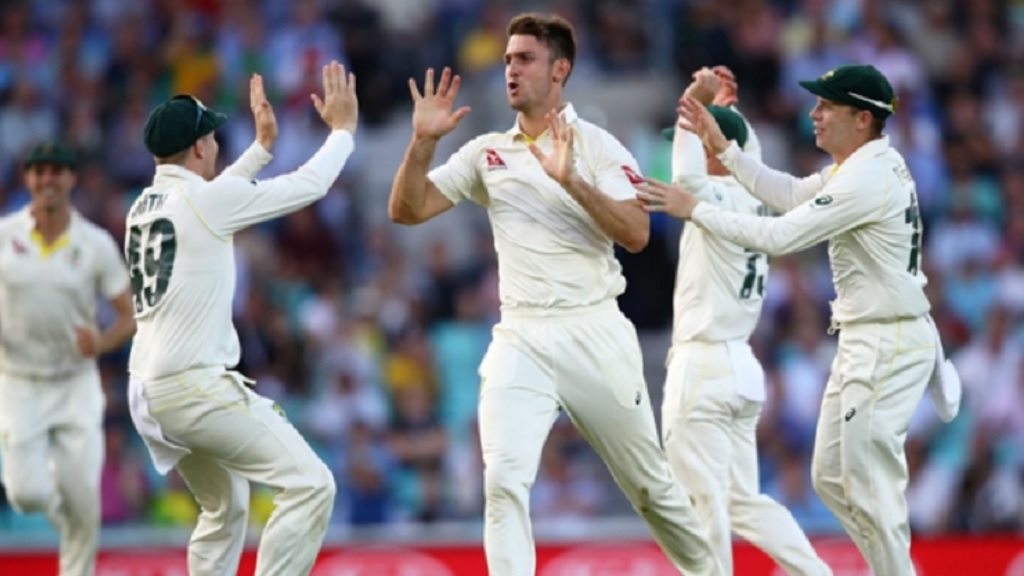 Australia players celebrate the fall of a wicket.

Recalled all-rounder Mitchell Marsh claimed four wickets as England collapsed before Jos Buttler made a counter-attacking unbeaten half-century to frustrate Australia on day one the final Ashes Test at The Oval.

England, attempting to salvage a 2-2 draw, were in a promising position on 170-3 after Tim Paine surprisingly asked them to bat first on a sunny Thursday in London.

Joe Root was dropped three times but England crumbled after the captain - who passed 7000 Test runs - was dismissed by the excellent Pat Cummins for 57, losing five wickets for 56 runs to slump to 226-8.

Marsh, playing his first match of the series at the expense of Travis Head, took 4-35, while the excellent Cummins and Josh Hazlewood claimed two wickets apiece to put the tourists on top as they eye a 3-1 victory.

Buttler (64 not out) then went on the attack - with support from Jack Leach - in a frantic final session, which England ended on 271-8 - having been 103-1 just after lunch.

A juggling Steve Smith caught Joe Denly (14) at the third attempt to end an opening stand of 27 - the highest of the series - and Cummins (2-73) should have had a second wicket when the recalled Peter Siddle put Root down on 24 at deep backward square-leg.

Root had just another run to his name when he was spilled by Paine after Cummins drew an edge and the skipper was on 30 when Smith dropped a tough chance diving to his right at second slip, Siddle the unfortunate bowler on that occasion.

England's premier batsman drove Hazlewood (2-76) for four to reach a notable personal milestone after lunch but Rory Burns tamely top-edged the same bowler to Marsh at mid-on, having struck seven boundaries in an otherwise assured knock.

Ben Stokes, playing as a specialist batsman due to a shoulder injury, gifted a first wicket to Marsh attempting to pull the all-rounder but ballooning to Nathan Lyon for 20 and there was no reprieve for Root when Cummins bowled him with a top-class delivery after tea.

Marsh trapped Jonny Bairstow (22) in front on the full with a yorker and seeing the back of Sam Curran, who hooked Cummins for six and could not take advantage of being called back after the paceman overstepped when he snared him lbw.

The impressive Marsh also removed Chris Woakes and Jofra Archer edged Hazlewood behind as England fell to pieces, but Buttler went into one-day mode with Leach digging in.

Buttler was struck by a short ball from Hazlewood before hitting the quick for three sixes - the third taking him to a half-century - and brought out the reverse sweep as Leach (10no) stood firm at the other end in an unbroken stand of 45.

The probing Marsh and a relentless Cummins put Australia in the ascendancy with potent bursts early in the final session, the former generating swing and executing the yorker superbly as he took 3-17 in an eight-over spell after tea.

Marsh pulled up with cramp but was able to return after leaving the field, while the hostile Cummins was his usual outstanding self, charging in for 22.5 overs just four days after putting in such a big shift on the final day of the win in Manchester.

Buttler showed resilience with England battling to try and force a draw on a tense last day at Old Trafford, but played his natural game when he was in danger of running out of partners.

He clattered Hazlewood over the ropes down the ground twice and hooked him for another six to lift the spirits of England fans, while Leach was solid in defence in a frustrating end to the day for Australia.

MOMENT OF THE DAY

Cummins has been outstanding for the tourists throughout the series and conjured up another pearler to remove Root, who lost his off stump caught on the crease after being removed in similar fashion by the quick in the second innings of the fourth Test.

- Marsh has four wickets in an innings for just the second time in his Test career, the other occasion coming when he took 4-61 against West Indies in December 2015.

- Buttler has moved past 7000 runs in all formats for England.

- Root has failed to convert any of his last nine Ashes half-centuries into a hundred.