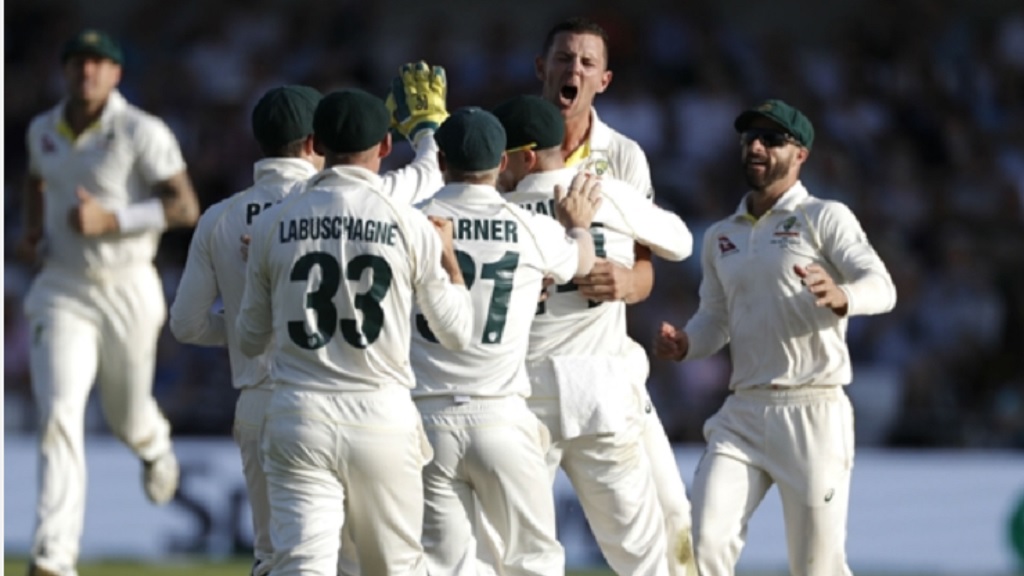 Joe Root and Joe Denly scored battling half-centuries but Australia remain on course to retain the Ashes after Josh Hazlewood struck twice on a glorious day three at Headingley.

England were humiliatingly bowled out for a pitiful 67 on the second day in Leeds and were set a highly unlikely 359 to level the series when the tourists were dismissed for 246 on Saturday.

The in-form Marcus Labuschagne showed great character and technique while riding his luck to make 80, with Ben Stokes taking 3-56 as England ended Australia's second innings in the morning session.

Captain Root (75not out) and the under-pressure Denly dug in to put on 126 for the third wicket after England were reduced to 15-2, but Hazlewood (2-35) removed the Kent batsman for exactly 50.

Root and his deputy Stokes were unbeaten at stumps, but England are still facing defeat at 156-3, needing a further 203 to win, with Tim Paine's side requiring seven wickets to go 2-0 up and keep the urn.

The tenacious Labuschagne was struck on the head by a Broad bouncer before being dropped by Jonny Bairstow off the same bowler on 60, having also been given three lives on day two as Australia's lead moved past 300 after they resumed on 171-6.

James Pattinson was caught by Root off Jofra Archer at first slip to end a seventh-wicket stand of 51 and Labuschagne soon required another check over from the doctor.

Archer rattled him on the grilled with a rapid bouncer, recalling the gripping battle the pair engaged in at Lord's last week.

Stokes saw the back of Pat Cummins and Labuschagne missed out on a hundred when he was run out by Denly, with Nathan Lyon chopping on to Archer to bring the innings to an end.

Rory Burns nicked Hazlewood to David Warner at first slip after lunch and the out-of-sorts Jason Roy followed in the next over, bowled by a brilliant delivery from Cummins that reduced England to 15-2.

The vast majority of a packed crowd would have been fearing a repeat of England's first-innings fiasco, but Denly and Root showed the resistance that had been so badly lacking on Friday to take tea on 90-2.

Denly took a blow on the helmet from Cummins but skipped down the track to dispatch Lyon down the ground for four and ran well with the busy Root, who drove the spinner to the cover boundary to reach his half-century.

Root successfully reviewed an lbw decision after inside edging a straight one from Hazlewood and Australia wasted a review for a Lyon leg-before shout against Denly.

He did not last much longer, though, falling caught behind after being rapped on the gloves by a hostile ball from Hazlewood after raising his bat for the second time in the longest format, leaving Root and Stokes to see England through to stumps.

AUSTRALIA FINALLY MADE TO WORK BY ROOT AND DENLY

The Australia quicks needed fewer than 28 overs to blow pitiful England away on day two, but they were made to put in the hard yards during a gutsy third-wicket stand.

Denly showed character as he was peppered by short stuff and hung in there with his place under threat, while Root was more like his usual self after making back-to-back ducks.

Had England shown the same application the previous day, they could have built a match-winning lead.

RELENTLESS HAZLEWOOD ON THE MONEY TO CASH IN AGAIN

Hazlewood followed up his five-wicket haul in the first innings with another outstanding performance, mixing hostile short stuff and disciplined probing on and just outside off stump.

Cummins was also excellent with the new ball, but Hazlewood was the pick of bowlers, getting Burns with a well-directed delivery and claiming an elusive breakthrough by ending Denly's battling knock.

MOMENT OF THE DAY

Cummins produced a beauty to beat Roy all ends up, clattering off stump when he played down the wrong line. Roy trudged off for what will surely be his last innings of the series as an opener, with a spot down the order possibly the best he can hope for at Old Trafford.

KEY OPTA FACTS
- Root and Denly's century stand was only England's second of the series, the other was 132 between the skipper and Burns at Edgbaston.
- Labuschagne has 13 scores of at least 50 in 23 Test and County Championship innings in this English summer.
- England reached 100 for the loss of two wickets or fewer for only the second time in the series, having also done so in their first innings of the opening Test in Birmingham.
- Of the four successful 300-plus fourth innings chases in Tests in England, three have been at Headingley.

Ashes 2019: England capitulate as Australia dismiss them for 67

Ashes 2019: One player will not decide series – England coach Bayliss