THE ASHES: Aussies poised for crushing first-Test victory over England 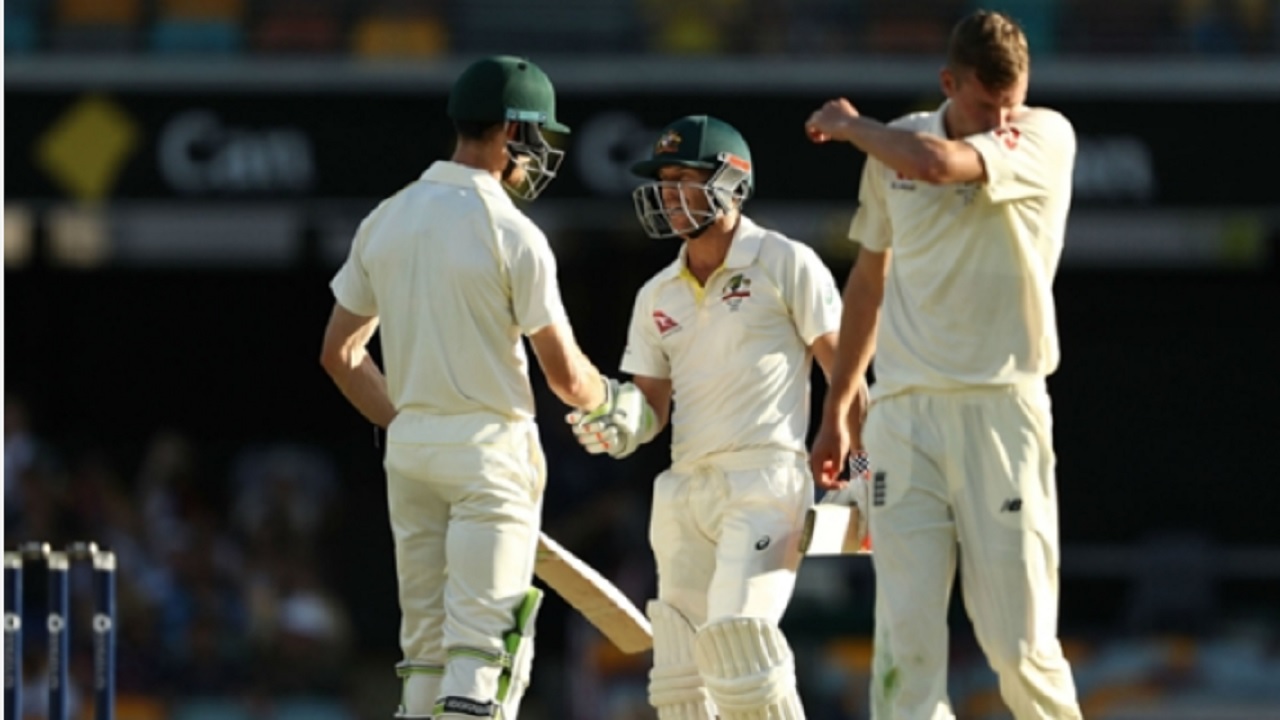 Australia are closing in on a comprehensive first-Test win after David Warner and Cameron Bancroft moved the Ashes hosts within 56 runs of beating England at stumps on day four.

After a mixture of fine bowling and an England collapse set Australia a target of 170 before tea in Brisbane, openers Warner (60 not out) and Bancroft (51 not out) handled the tourists with relative ease.

Warner brought up his 25th Test fifty, while debutant Bancroft hit a maiden half-century to guide Australia to 114 without loss at the Gabba.

Nathan Lyon (3-67), Mitchell Starc (3-51) and Josh Hazlewood (3-46) piled the pressure on the tourists, who were bowled out for 195 in their second innings having been on the end of a contentious DRS decision involving Moeen Ali as captain Joe Root (51) was the only England batsman to make a half-century.

Closing in on a half-century, Moeen (40) – who had looked comfortable in the middle alongside Jonny Bairstow (42) post-lunch – reluctantly walked back to the pavilion after a close call from third umpire Chris Gaffaney.

Some quick thinking and outstanding glove work from Tim Paine – a shock selection for his first Test since 2010 – resulted in a stumping after the umpire immediately called for a referral, though Moeen appeared unperturbed having lunged forward to a Lyon delivery.

But after numerous replays, Gaffaney felt Moeen's foot was not behind the line, striking a big blow to England.

Root (51) – cleared of concussion before play following a nasty blow to his helmet on Saturday – and Mark Stoneman (27) returned to the crease with England on 33-2 at the start of the day.

The pair looked comfortable after surviving a testing spell late on day three, that was until Lyon was introduced into the attack.

Spinner Lyon combined with Steve Smith to dismiss Stoneman and Dawid Malan during the morning session, while Hazlewood claimed the prized scalp of Root.

Lyon – who celebrated taking 50 wickets in a calendar year for the first time – left England in a spin, drawing an edge from Stoneman as Smith took a good catch at slip, and the duo came together again to send Malan (4) back to the pavilion.

Root posted his 33rd Test fifty but Hazlewood made a huge breakthrough by trapping the England captain lbw the delivery after he raised his bat as England went into lunch 119-5, a lead of only 93 runs.

England fell apart in the session prior to tea, collapsing to lose their final four wickets for just 10 runs.

The Australia openers had no such trouble, Warner striking eight boundaries and the composed Bancroft launching Moeen for six in what became a one-sided contest.

THE ASHES: Centurion Smith and Hazlewood put Australia on top

THE ASHES: Smith, Marsh lead revival as Australia fight back

THE ASHES: Australia fight back on tight first day in Brisbane