Atletico beat Barcelona in league for first time in a decade 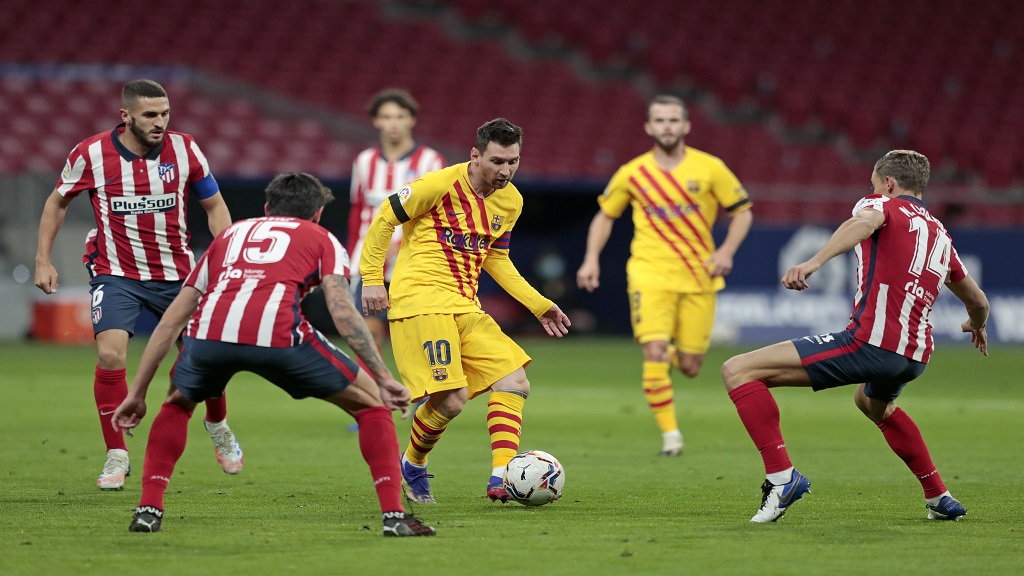 Yannick Carrasco scored after defensive blunders as Atletico Madrid ended a decade-long winless streak against Barcelona in the Spanish league with a 1-0 victory on Saturday.

“We are very happy to have won, it had been a long time without a victory against Barça,” Carrasco said.

As well as the match, Barcelona also lost captain Gerard Pique to a right-knee sprain early in the second half.

The win gave Atlético a nine-point advantage over Barcelona after eight matches. Diego Simeone's team is level with Real Sociedad at the top of the standings with 20 points and has a game in hand. Sociedad visit promoted Cádiz on Sunday.

“The difference (of nine points) is pretty big," Barcelona coach Ronaldo Koeman said. "The league is still long and there are a lot of games left, but this defeat leaves us needing to string together a long run of wins”

Carrasco netted the winner after mistakes by both Piqué and goalkeeper Marc-Andre Ter Stegen. Pique lost possession near midfield and Ter Stegen unsuccessfully came far out of his area to try to intercept a pass to Carrasco. The Belgium midfielder neatly slipped the ball between Ter Stegen's legs to set himself up for a shot from long range into the open net.

“It is worrying how we conceded the goal,” Koeman said. “A big team cannot concede a goal like that … We have (to) work more, especially in defense, to improve.”

Atlético haven’t beaten Barcelona in the league since a 2-1 win in February 2010 at the now-demolished Vicente Calderón Stadium. The teams had played 20 matches since then, with Barcelona winning 14 times.

Barcelona had been the last team to beat Atlético at the Wanda Metropolitano Stadium in the Spanish capital, winning 1-0 last December in the Spanish league. Atlético are now unbeaten in 19 matches at the venue.

Atlético extended their unbeaten run in the league to 24 matches. Their last league loss was against city rival Real Madrid at the Santiago Bernabéu Stadium in February.

Barcelona were without veteran midfielder Sergio Busquets because of a knee injury sustained while playing with Spain in the Nations League.

Piqué had to leave the match in the 63rd after Atletico forward Ángel Correa fell on his right leg. Piqué's knee bent inward and he had to be helped off the field. He struggled to walk and looked in a lot of pain, often putting his hands to his face.

Barcelona's Sergi Roberto also appeared to be injured when he left near the end of the match.

Barcelona started controlling possession but Atlético had the most dangerous chances early on. Ter Stegen saved well against Saúl Ñíguez's shot in the fifth minute, and Marcos Llorente hit the crossbar from close range in the 12th.

Lionel Messi put in a lackluster performance but had one of Barcelona's best chances in the 41st after a nice pass from Jordi Alba. The Argentina playmaker had his angled shot saved by Atletico goalkeeper Jan Oblak. Messi also missed from a free-kick later in the second half.

Barcelona defender Clément Lenglet had his close-range header saved by Oblak early in the second half.

“We knew it was a difficult match here,” Barcelona’s Pedri said. “We didn’t do well upfront and they scored at the end of the first half, that was tough for us mentally.”

Abraham scores as Chelsea coast to 2-0 win over Newcastle