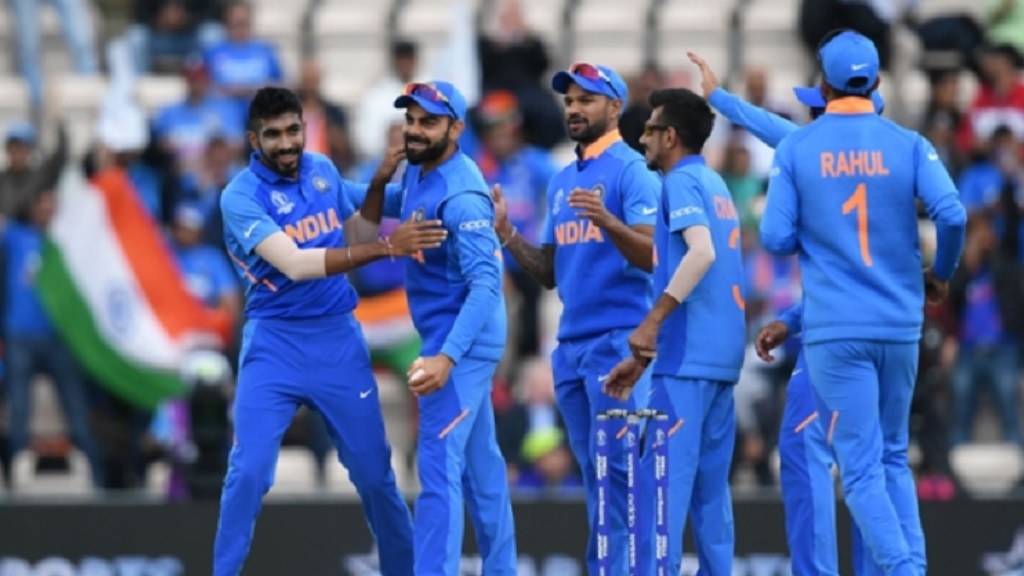 India celebrate a wicket in their win over South Africa.

India and Australia will do battle in the ICC World Cup at The Oval on Sunday in the most-anticipated match of the tournament to date.

The two nations are tipped to be the biggest threat to tournament favourites England and both have started in encouraging fashion.

Australia followed up a routine win over Afghanistan with a gutsy 15-run victory over West Indies in what was a tremendously entertaining contest in Nottingham on Thursday.

Fighting back from 38-4 and 79-5, Australia reached 288, largely thanks to a surprising 92 from bowler Nathan Coulter-Nile and Steve Smith’s 73, before paceman Mitchell Starc took five wickets with the ball.

India have played just once but were far too good for winless South Africa on Wednesday, winning by six wickets.

Of the last 10 one-day internationals between the sides, both nations have won five, but Australia have claimed the last three – all in India – earlier this year.

Australia have had the edge over India in World Cup meetings, having won six of the last seven, including a 95-run triumph in Sydney in 2015.

India started their World Cup much later than other sides but Rohit Sharma (122 not out) and Yuzvendra Chahal (4-51) did not take long to find form against the Proteas.

Australia sit third in the standings after successive victories – part of a winning streak that sits at 10 - but know tougher tests are to come.

India opener Rohit Sharma: "My 122 not out at Southampton was a very special hundred. One of my best … I have to get the job done for the team. That's what matters … I want to win maximum games for my country."

Australia captain Aaron Finch: "At times in the past, we have probably let Virat [Kohli] get off to a bit of a flyer with being just a bit too straight to him or a bit too full … we know once he gets into his innings, he is so hard to stop, so you can't afford to play catch up against great players. Same for Rohit."

- India have won 12 of their last 13 games played at the ICC World Cup; however, their only defeat in that span came at the hands of Australia in the semi-finals of the 2015 tournament.

- Australia will be searching for an 11th consecutive ODI victory; 10 straight wins is their longest run in the format since they strung together 12 victories in a row between 2009 and 2010.

- Rohit Sharma needs a knock of just 20 runs to become the second batsman in ODI history to score 2,000 runs for India against Australia (Sachin Tendulkar – 3,077).

- Nathan Coulter-Nile narrowly missed out on surpassing the record for most runs scored by a number eight in an ODI innings last time out, his 92 off 60 balls against the West Indies falling just shy of the unbeaten 95 set by England’s Chris Woakes (v Sri Lanka, 2016).