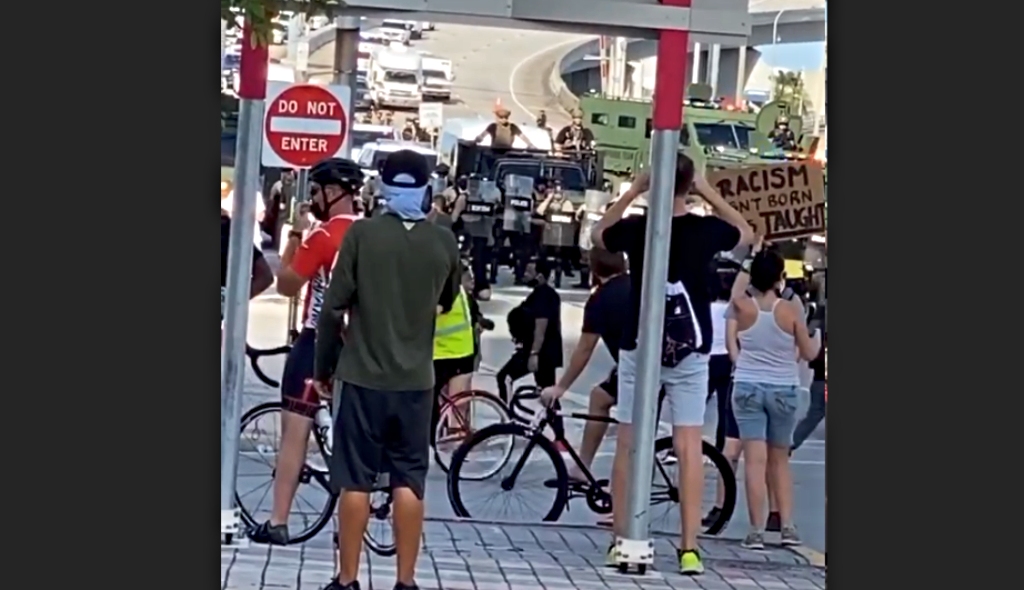 Protests have spread to Canada. This was the scene shown by Tory Lanez when he went out in solidarity with the protesters.

This was but one of the signs on display when Bajan-Canadian rapper, singer Tory Lanez hit the streets to protest today, Sunday (May 31).

Up in arms and fed up with persons of influence misusing or failing to use their platforms to advance the call for justice this toss, he took to task anyone who was not showing up for the black community that is hurting right now. Since the murder of George Floyd in Minnesota by a white ex-police officer who was seen using excessive force, there have been five days of protests across more than 12 of the 50 United States and today protests were seen outside of the US, with demonstrations in London, Berlin and Canada.

Tory was in Canada where he resides. His dad is Barbadian and his mum is from Curacao.

Tory, who is known to have fun on his IG Live, today put on a serious face and said:

"If anybody is a celebrity, stop using your platform to come on here to say anything that is against what the people in the streets is saying.

He told the so-called influencers until they "go out, study and understand what is going on out in our community, just stop. Get off Twitter. Talk to your PR, ask your PR what you should say."

On Twitter, before he did the Live video to speak to his fans, he dragged those celebs and persons who were wasting tears crying over the brands that are losing money at the hands of looters.

Asserting that he in no way supports looting, Tory said that he fully endorses the protests and stands with those demanding 'Justice for George'.

"When my rich celeb friends in they [sic] house and on the gram like “stop looting u f***ing up our business “ ... Y’all can miss me with that sh*t ... y’all n***as is rich ! Y’all not feeling the pain of these people out there that done lost they [sic] job and are deeply affected by this."

Tory Lanez tells all celebrities that are posting against the protesting to stop pic.twitter.com/m2TpwPz90d

He followed this up with:

"N***as wanna cry about protecting these businesses of these huge brands and cooperations from looting .... AS IF THESE STORES DONT GOT INSURANCE TO GET ALL THAT SH*T BACK !!!! I don’t condone looting . But the people gone do what they feel is right . Period . #JusticeOrNoPeace"

And for those black entertainers who do not understand the whole Black Lives Matter movement and the reason why hundreds of thousands of persons are taking to the street, he wrote:

"And to any of my black peers in this entertainment industry .... if your opinion on this matter at hand is ANYTHING along the lines of “ we need to blame ourselves ... and it’s not the cops fault “ or “u gotta look at both sides” .. personally from me to u ... F*** OUTTA HERE"

In terms of celebrities, seen in the streets of Chicago, Atlanta, Los Angeles and in other states were Ariana Grande, Nick Cannon, Michael B Jordan, J Cole, and others.

hours and miles of peaceful protesting yesterday that got little to no coverage.
all throughout beverly hills and west hollywood we chanted, people beeped and cheered along.
we were passionate, we were loud, we were loving.
cover this too please. #BLACKLIVESMATTER https://t.co/vD90CEtF94 pic.twitter.com/GZ6uKDfPM7