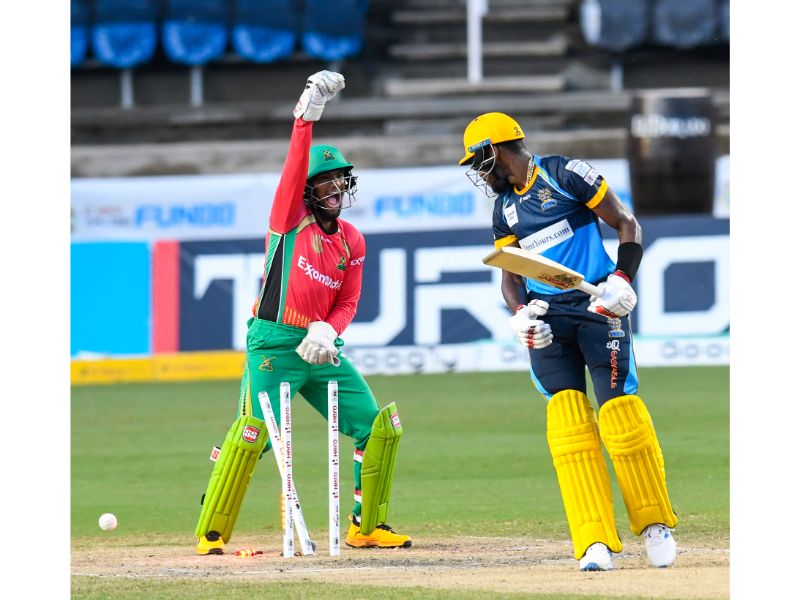 New champions will be crowned in the 2020 Hero Caribbean Premier League after the 2019 winners Barbados Tidents were beaten by the Guyana Amazon Warriors, for the second time in three days at the Brian Lara Cricket Academy, Tarouba.

The six-wicket loss meant that the Tridents cannot finish in the top four and cannot progress to the semi-finals of the tournament.

It was sweet revenge for the Amazon Warriors, who won 11 games in a row in 2019 only to lose to the Tridents in the final, their fifth loss in the CPL finals.

The victory on Thursday night was set up by fine seam bowling by Romario Shepherd (3/22), who won the Man of the Match award, and Imran Tahir (3/12).

Shimron Hetmyer (32 not out) the simplified the chase after the Amazon Warriors fell to 46/3, in search of 90 for victory.

The Amazon Warriors completed a six-wicket victory with 34 balls to spare, and finished their 10 games in second place.

With four matches still to be played in the preliminary round, the Amazon Warriors have avoided playing the red-hot Trinbago Knight Riders in the first semi-final and will face either the St Lucia Zouks or the Jamaica Tallawahs in the second semi-final on Tuesday.

Charles chipped tamely to Taylor at point, but there was nothing tame about the dismissal of pinch-hitter Rashid Khan, as a fierce pull was brilliantly caught by Brandon King who ran 20 yards to his left from deep square leg and dived full-length.

Greaves survived the hat-trick ball then closed the over with a four. Brooks hit a four off Imran Tahir but fell softly to Green, albeit with Taylor taking a good catch at short midwicket, and the Tridents reached the Powerplay at 28/3.

That became 28/4 the very next ball when Tahir bowled Greaves, beating him all ends up with a googly. Kyle Mayers launched a straight Hero Maximum off Sinclair, but was undone by wrist-spin again, skying a Tahir googly to give Hemraj an easy catch at mid-off.

The implosion continued as Tridents captain Jason Holder gifted Green a catch at midwicket off the second ball after the drinks break, Shepherd the bowler, and a second poor batting effort in a row by the Tridents against the Amazon Warriors left them 39/6 after 11 overs.

Mitchell Santner and Nyeem Young milked Sinclair for eight, and while Naveen went for just one on his return, Young ended a 37 ball boundary drought with a classy Hero Maximum over off Green.

Santner pulled Shepherd for four, and after 15 overs the Tridents were 65/6. Sinclair ended the mini-recovery, bowling Santner with a quicker ball and celebrating by adding an extra flip or two to his post-wicket routine.

Young should have fallen to Naveen, King making good ground on the leg-side again but this time dropping the catch, but it mattered little as he soon missed a sweep off another Tahir googly and was bowled.

Tahir ended his spell atop the Hero CPL wicket-takers table, and the Tridents ended the 18th over at 78/8. Raymon Reifer pulled a Naveen slower ball through midwicket, and although the young Afghan ended wicketless he will bowl far worse spells that look better on the scorecard.

Shepherd once again showed off his effective slingy yorker in the 20th over that went for just five.

The innings ended with a run-out, and for the third time in Hero CPL 2020 the Tridents had failed to make three figures as a team.

Santner struck second ball of the chase, bowling King with an arm ball that in effect swung into the right-hander.

A tight over from Holder ensured Hemraj started slowly, but got himself going with a powerful slog swept Hero Maximum and a whipped four off Santner.

He should have fallen to the New Zealander, the usually faultless Hayden Walsh Jr dropping a catch, but he continued his attack off Rashid with two fours and a six.

After four overs, the Amazon Warriors were 34/1 and the required run rate was just three and a half an over.

Holder cleverly angled the ball across Hemraj, who couldn’t resist a pull shot and was well caught by Young at third man.

Sherfane Rutherford, in for the rested Keemo Paul, got a promotion to four, but lasted only three balls before edging Holder to Ashley Nurse at slip.

Holder took a heavy fall but completed a wicket-maiden, leaving the Amazon Warriors 40/3 after seven overs.

Hetmyer started watchfully, his first boundary not coming till his 12th ball and that too off an edge past new keeper Charles.

Pooran faced five dot balls and tried to get off the mark with a boundary, but toe-ended Reifer straight up in the air to give Brooks a simple catch at cover.

Taylor joined Hetmyer with the score 49/4 and a brief to calm things down. Young started with a chest-high full-toss that was rightly called a no-ball, and was lucky not to be called for another with the free hit, Taylor pulling a suspiciously high delivery for four.

Hetmyer again edged past the keeper, and he and Taylor nudged and guided the Amazon Warriors to 67/4 at halfway needing just 23 more to win.

Holder could have ended his spell with a third wicket, but Taylor’s edge flew wide of slip, and Rashid was nudged for six off two overs to leave just 12 to win.

Hetmyer finally hit his first boundary off Santner thanks to indifferent boundary fielding from the visibly injured Holder, Taylor had time to practice his forward defensive against his countryman, and Hetmyer for the second day in a row hit the winning runs.

The Tridents now hold the unwanted record of being the first Hero CPL defending champions not to make the knockouts, and with the Amazon Warriors now guaranteed to avoid the Trinbago Knight Riders in the semi-finals, a sixth final is very much on the cards.