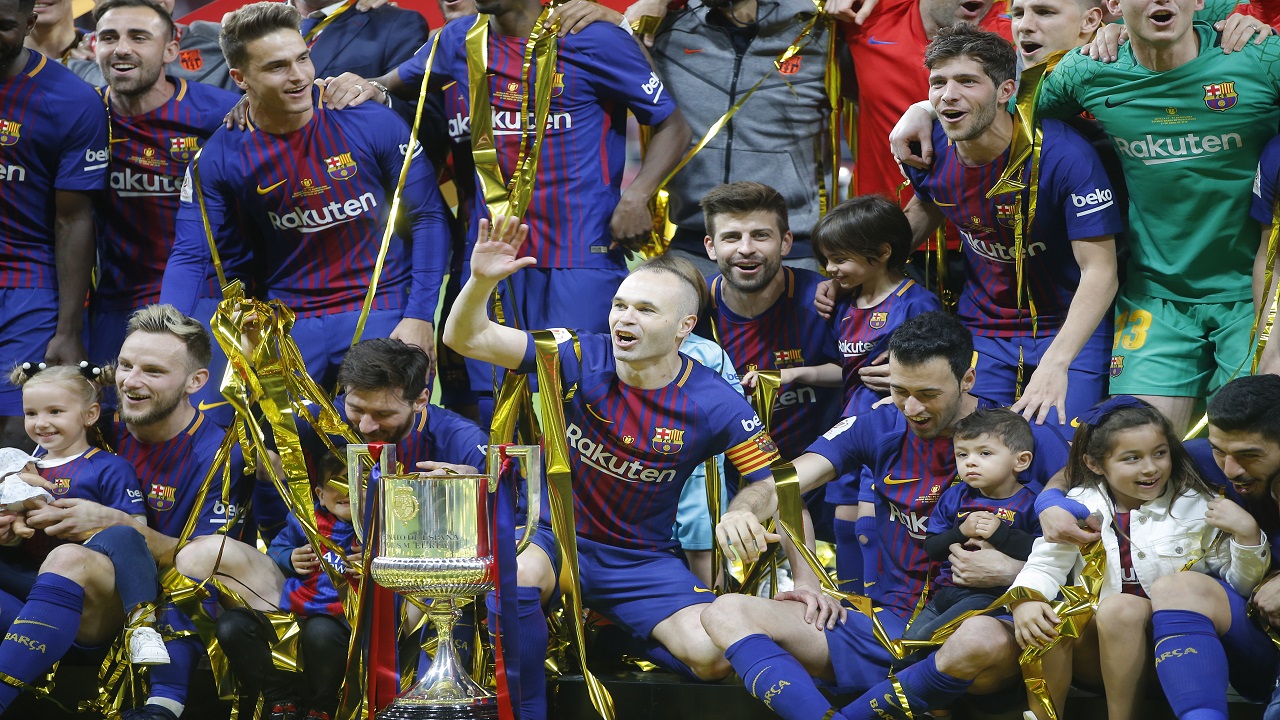 Barcelona team players pose with the trophy after the Copa del Rey final match against Sevilla at the Wanda Metropolitano stadium in Madrid, Spain, Saturday, April 21, 2018.

If it was a farewell, Andres Iniesta went out in style.

The veteran midfielder is expected to soon confirm he's leaving Barcelona at the end of the season. He couldn't have asked for a better way to say goodbye.

Iniesta scored amid a brilliant performance as Barcelona crushed Sevilla 5-0 in the Copa del Rey final on Saturday, and became the first team in 85 years to win four straight Copa titles.

"It was a great night, for me and for the whole team," Iniesta said. "There were a lot of strong emotions, a lot of different feelings. I'm happy to be able to help the team win this title."

Despite a lifetime contract at Barcelona, the 33-year-old Iniesta has been linked to a move to Chinese football. He will reveal his decision in the next week.

"It's a spectacle to watch Andres play," Barcelona coach Ernesto Valverde said. "He has to make a decision and see if he wants to come back next season."

Luis Suarez scored twice and Lionel Messi and Philippe Coutinho also made the scoresheet for Barcelona's record-extending 30th Copa triumph, and sixth in the last decade.

"We played a great match, with a lot of determination," Valverde said.

Sevilla was trying to win a sixth Copa and save a season which will end without any trophies and maybe not even a place in the Europa League next season.

The final took place at Atletico Madrid's Wanda Metropolitano Stadium in the capital amid the ongoing political turmoil involving Catalonia's bid for independence.

There were jeers by part of the Barcelona crowd when the national anthem was played, but the boos were largely subdued by the reaction of the numerous Sevilla fans in the crowd. Spain's King Felipe VI smiled and saluted the fans after the anthem.

Suarez opened the scoring with a shot into the open net after a breakaway that started with goalkeeper Jasper Cillessen in the 14th minute. Cillessen made a long pass from inside his area to Coutinho. The Brazilian playmaker entered the box free from markers before making a pass back to Suarez, who just tapped the ball in.

Messi scored with a mid-height shot from the middle of the area after a great backheel pass by Jordi Alba off the end line. Messi became the second player to score in five Copa del Rey finals, after Athletic Bilbao's Telmo Zarra.

Suarez scored again before halftime with a low shot after picking up a great throughball by Messi and fending off a defender while entering the area.

Iniesta scored the fourth in the 52nd after a quick exchange of passes with Messi. He dribbled past goalkeeper David Soria and shot into an empty net.

Iniesta received a huge ovation by fans from both clubs when he was substituted near the end of the match. He then lifted the trophy, his sixth in the Copa.

Last year, Iniesta became the first player to sign a lifetime contract with Barcelona, a deal allowing him to keep playing for the club for as long as he remained fit.

Coutinho closed the scoring by converting a 69th-minute penalty kick after a handball by a Sevilla defender.

It was Sevilla's eighth straight match without a win in all competitions.