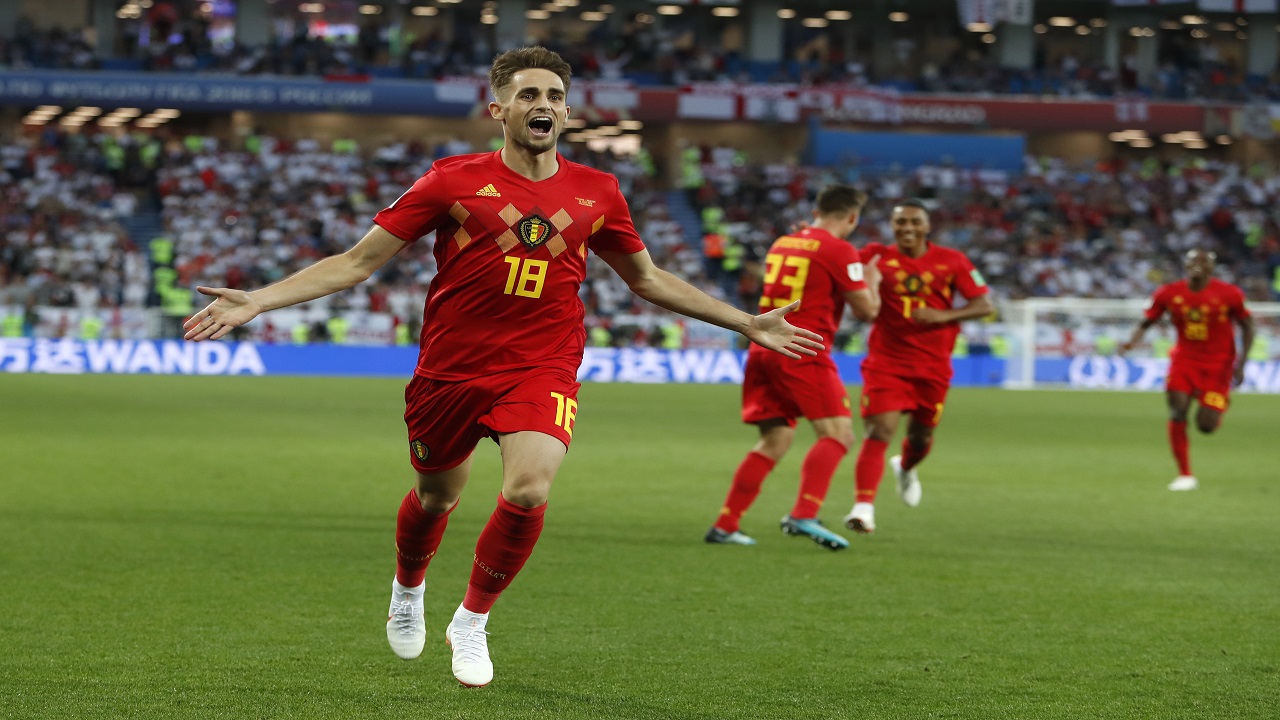 Belgium's Adnan Januzaj celebrates after scoring during the group G match against England at the 2018 football World Cup in the Kaliningrad Stadium in Kaliningrad, Russia, Thursday, June 28, 2018. (AP Photo/Alastair Grant).

With Brazil potentially awaiting in the quarter-finals for the group winners, there was speculation both teams would prefer to finish second to be paired with either Sweden or Switzerland in the last eight.

But despite Belgium making nine changes from their previous group match and England eight, both sides showed plenty of willingness to try and win the game and the group.

Januzaj's moment of magic was enough to secure maximum points for Belgium and their first win against England since 1936, the winger cutting in off the right flank to whip a delightful strike across Jordan Pickford.

Marcus Rashford had England's best chance to reply, but Thibaut Courtois made a fine save to deny the Manchester United striker, who was deputising for rested Golden Boot leader Harry Kane.

John Stones was one of two outfield players to be retained by Gareth Southgate and he had to be replaced at the break - the centre-back could be a doubt for the Three Lions' second-round match against Colombia.

Jamie Vardy was gifted an early opportunity by sloppy defending, but Courtois saved with his right boot.

Pickford kept out a long-range drive from Youri Tielemans before the goalkeeper was rescued by Gary Cahill's goal-line clearance after the ball squirmed out of his grasp.

Tielemans collected the game's first booking and Trent Alexander-Arnold was next to produce a block on the line, although Pickford might well have saved the effort from Marouane Fellaini.

Leander Dendoncker was booked for bringing down a rampaging Danny Rose as England appeared to be edging towards top spot in the group by virtue of their better fair play record.

England were dealt a blow with Stones replaced at the break, the Manchester City defender appearing on the bench with an ice pack applied to his calf.

And Belgium took the lead in the 51st minute, Januzaj scoring a beauty to open his international account.

The former Manchester United man tied Rose in knots, cut inside and whipping a glorious finish out of Pickford's reach, the goalkeeper beaten in his top-right corner.

Clever play from Vardy sent Rashford through on goal in the 66th minute, but the striker's effort was a good height for Courtois to get a vital touch to turn the ball wide of the post.

While England will be concerned about Stones' knock, Belgium coach Roberto Martinez was able to bring Vincent Kompany off the bench for the last 16 minutes for the defender's first action of the World Cup.

Rashford drilled a free-kick narrowly over the angle, but Belgium - who could have added a late second but for Pickford denying substitute Dries Mertens - held firm to win Group G.

Colombia advance while Senegal is eliminated by tiebreaker

Japan advance on yellow cards despite losing at World Cup