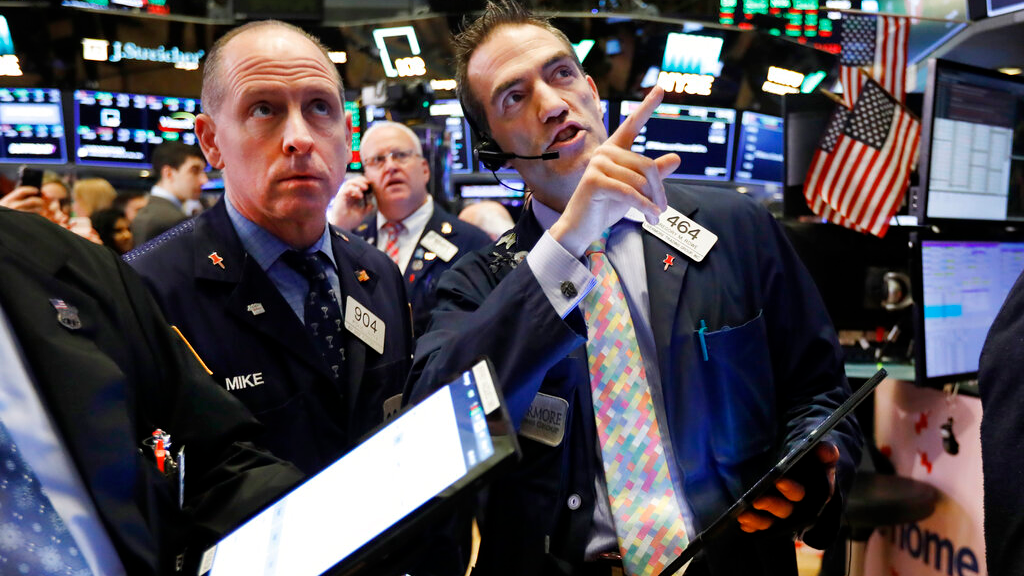 Communications and technology sectors helped lead the market higher, as they have all year. This week the S&P 500 index returned to a record high on expectations that those companies can continue to deliver strong growth despite a slowing global economy. Many are delivering. Revenue jumped 14% for Microsoft and 26% for Facebook from a year ago.

Earnings reporting season is more than a third of the way in, and investors are searching for clues about whether profit growth can accelerate later this year following a weak first quarter. The stock market has had a furious rally this year, largely because the Federal Reserve has said that it is halting its plan to raise interest rates, at least temporarily.

Industrial stocks were on the losing side after 3M, the maker of Scotch tape and various products for businesses, reported lower revenue and profit for the first three months of the year than Wall Street expected. It also slashed its profit forecast for the full year. United Parcel Service said its net income fell 17% on nearly flat revenue, and Illinois Tool Works had weaker revenue than analysts forecast. Rockwell Automation said that automotive related sales were less than it expected last quarter.

They all helped drag industrial stocks to the sharpest loss by far among the 11 sectors that make up the S&P 500, and 3M's loss dealt a particularly big blow to the Dow Jones Industrial Average.

EARNINGS WINS: Facebook surged 6.1% following its earnings report, and it helped communications companies in the S&P 500 jump 1.2% for the biggest gain among the 11 sectors that make up the index.

Raytheon, a defense contractor that is also in the industrial sector, sank 5.1%. It reported stronger profit for the latest quarter than expected, but analysts noted some mixed results for its profit margins.

Altogether, the companies helped drag industrial stocks in the S&P 500 down by 1.9%.

GRAND PROBLEMS: Chipotle Mexican Grill sank 6.3% after it said that it received a new subpoena requesting information related to illnesses associated with restaurants in Simi Valley, California, Boston and elsewhere. It had already disclosed receiving a federal grand jury subpoena from the U.S. District Court for the central district of California in 2016. The new subpoena requests information about an additional restaurant, in Powell, Ohio. The company said it has fully cooperated in the investigation.

THE POWER OF LOW EXPECTATIONS: Coming into this earnings reporting season, Wall Street was expecting a dud. Partially because of slowing economic growth around the world, analysts were forecasting the first drop in earnings for the S&P 500 in nearly three years.

Companies, though, have been surprising analysts with not-as-bad results. So far, about 190 of the companies in the S&P 500 have reported their earnings for the first three months of the year. Among them, earnings actually grew 2.1% from a year earlier.

All the better-than-expected results mean analysts are now forecasting a drop of 2.8% in earnings for S&P 500 companies this reporting season. That's not as bad as the 4% decline they were expecting a few weeks ago.

MARKETS ABROAD: European stocks struggled following news that two potential mergers won't be going ahead. In the U.K., regulators blocked Sainsbury's 7.3 billion-pound ($9.4 billion) purchase of Walmart's Asda unit amid concerns the deal would have increased prices and reduced the quality and range of products available.

And in Germany, Deutsche Bank and Commerzbank said they were halting talks on a possible merger that aimed to create a stronger global banking player, saying it would be too risky and costly.

In China, the Shanghai market dropped 2.4% amid signs the country's central bank plans to avoid major stimulus moves amid signs the economy is stabilizing.

State media reported that the People's Bank of China's latest injection of liquidity showed the use of target support rather than what the Xinhua News Agency described as a "scattergun approach."

US stocks claw back some of their big losses; oil slides