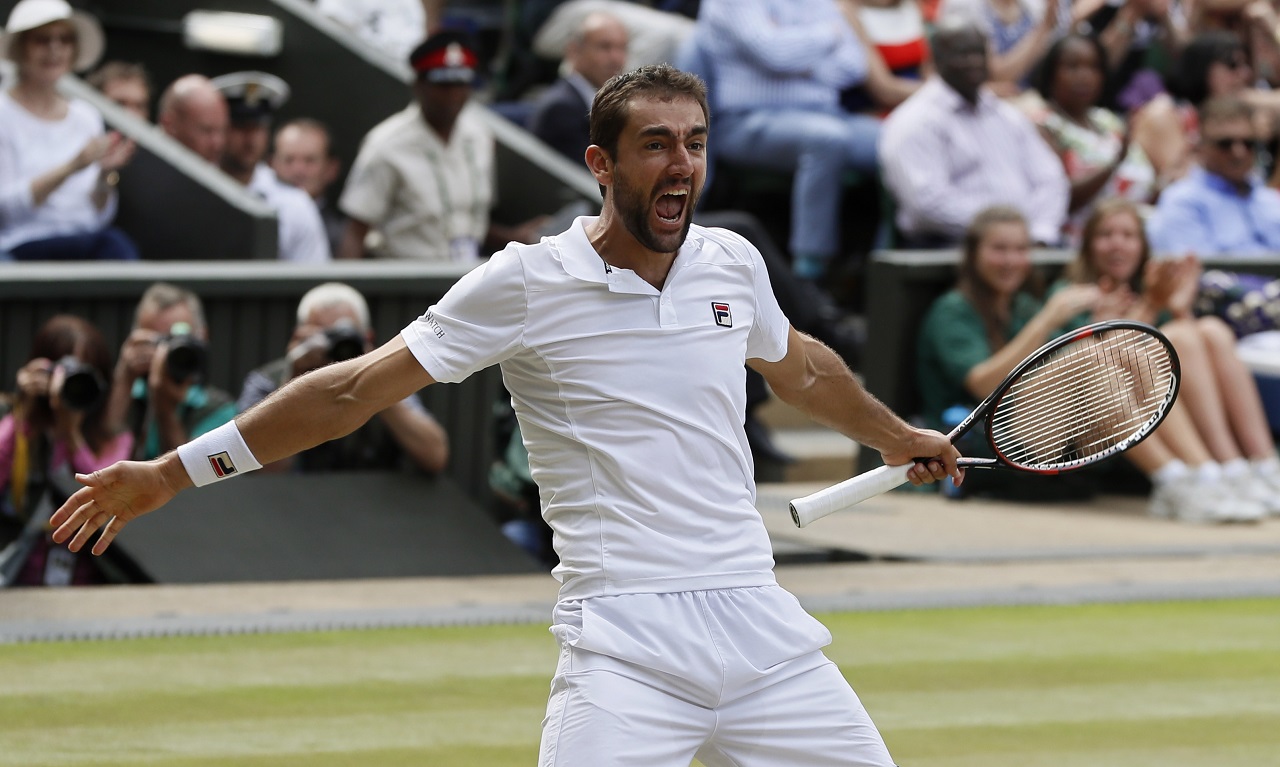 Croatia's Marin Cilic celebrates after beating Sam Querrey of the United States at the end of their Men's Singles semifinal match on day eleven at the Wimbledon Tennis Championships in London, Friday, July 14, 2017.

Marin Cilic succeeded where Andy Murray failed by outmanoeuvering Sam Querrey to reach his first Wimbledon final at the 11th attempt on Friday.

Querrey had beaten the defending champion at each of the last two editions of the grass-court grand slam, defeating Novak Djokovic in the third round last year before eliminating Murray this time around, although the world number one had been carrying a hip injury.

An encounter that had everything kept the Centre Court crowd gripped in the London sunshine, as both players showed they are more than just big servers with some enthralling rallies during nearly three hours on court.

In the end it was Cilic who prevailed to reach his second grand slam final, and he will hope for a repeat of his previous appearance – when he beat Kei Nishikori to win the 2014 US Open – on Sunday, with Roger Federer or Tomas Berdych his opponent.

Five years ago Querrey and Cilic produced the second longest match in Wimbledon history as the latter won a five-set marathon 17-15 in the decider after five hours and 31 minutes on court.

And another epic encounter looked likely from the outset, as the two strong and powerful warriors traded blows without ever really threatening the other's serve, some service games passing in the blink of an eye.

In between a number of aces there were some impressive rallies, though, with Cilic's backhand firing missiles cross court and Querrey's forehand unerringly accurate.

That is why it was such a surprise in the first-set tie-break that Cilic's backhand faltered after an untimely delay due to a spectator needing medical attention at 6-6, the Croatian firing two wayward strokes to hand his opponent the lead.

Early indications suggested it had wounded Cilic as another backhand was screwed wide early in the second, but he quickly wiped out the errors that had not been there in the first set.

Instead it was Querrey under pressure, and a looping forehand from the American opened the door for his rival. A revitalised Cilic finally accepted the invitation with a crisp, flat backhand down the line.

Levelling the match proved a mere formality from there and the momentum stayed with the Croatian as he continued to apply pressure on Querrey with a string of booming groundstrokes.

Another piece of Querrey's armour was removed in the third game of the third set as he was punished for a careless volley.

There was a brief return to form – including a sensational drop volley at the net – to force another breaker, but a poor backhand, followed by a meek forehand, gave Cilic a 2-1 lead.

Match over you may have thought, but not just yet. Back came Querrey with some stinging forehands that had Cilic on the back foot, and the Croatian placed a backhand into the net to slip a break behind.

He would not be denied that maiden final appearance at the All England Club, though, as three five-set matches in succession seemed to catch up with Querrey.

Tired shots from the 24th seed allowed Cilic to level at 4-4 and, under pressure for a second time to serve to stay in the match, Querrey crumbled – a double fault followed by two long groundstrokes enough to end his Wimbledon adventure.