Black Lives Matter banner removed at US Embassy in Seoul 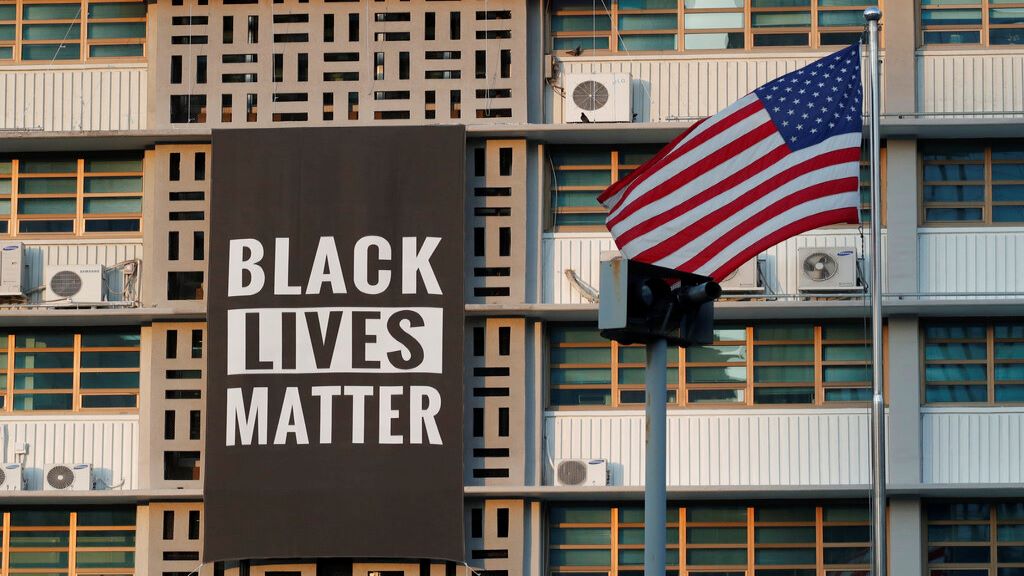 In this June 14, 2020 photo, US flag flutters next to a giant Black Lives Matter banner at the US Embassy in Seoul, South Korea. (AP Photo/Lee Jin-man)

A large Black Lives Matter banner was quietly removed from the US Embassy building in South Korea's capital three days after it was raised there in solidarity with demonstrators protesting against racial inequality back home.

The official explanation from the embassy, which didn't mention an LGBT pride flag that was also removed from the building, was that the Black Lives Matter banner was removed to avoid any perception that it was meant “to support or encourage donations to any specific organisation.”

The decision drew criticism from some activists in Seoul — and speculation that President Donald Trump may have been responsible. It will likely be controversial amid the ongoing global debate over racial inequality that has followed the death of George Floyd.

The banner was put up on Saturday with Ambassador Harry Harris tweeting that his embassy “stands in solidarity with fellow Americans grieving and peacefully protesting to demand positive change.”

The banner was taken down Monday. along with the rainbow pride flag. On Tuesday, a banner marking the upcoming 70th anniversary of the start of the Korean War was draped from the embassy.

Lee Tae-ho, an activist with the Seoul-based civic organisation People’s Solidarity for Participatory Democracy, called the abrupt banner removal regrettable, saying its presence was “a very positive thing that could improve the US image and help resolve the problem.”

“If the removal was really made because of pressure made by Trump ... I think what they did was unhelpful for the US,” Lee said.

The banner removal comes amid large US protests that began after Floyd, who was black, died after a white Minneapolis officer pressed his knee into his neck at length as he lay face down and handcuffed.

Harris “wanted to highlight the enduring American values of racial equality, freedom of speech, and the right to peacefully protest,” the US Embassy said in a statement. “However, the Ambassador’s intent was not to support or encourage donations to any specific organisation. To avoid the misperception that American taxpayer dollars were spent to benefit such organisations, he directed that the banner be removed.”

The US Embassy statement said the removal in “no way lessens the principles and ideals expressed by raising the banner.” It said it “will look for other ways to convey fundamental American values in these times of difficulty at home.”

There was no mention in the statement of the rainbow flag removal. The Supreme Court on Monday backed workplace rights for gay, lesbian and transgender people, a resounding victory for LGBT rights from a conservative court.

There was no immediate comment from Trump or Secretary of State Mike Pompeo about the banner removal, but the embassy statement repeated a recent comment from Pompeo that “America is rightly outraged at the brutal killing of George Floyd and our country will prosecute his killers and respect the right to protest peacefully.”

The groundswell of public unrest in America over police violence has extended globally, with protests in solidarity happening in Australia, Japan and other nations.

Seoul has seen some small-scale protests. In one rally on June 6, dozens of demonstrators wearing masks and black shirts marched through a downtown district carrying signs such as “George Floyd Rest in Peace and “Koreans for Black Lives Matter." A day earlier, others rallied in front of the US Embassy.

The embassy on Tuesday tweeted a message, with video of Harris participating, that said it organised a weekend “solidarity walk & candlelight vigil to demonstrate our support for fellow Americans who are protesting peacefully against racism and police brutality against African Americans and striving to create a more inclusive and just society.”

Some K-pop fans have also re-purposed their usual platforms and hashtags from boosting their favorite stars to backing the Black Lives Matter movement. They flooded right-wing hashtags and police apps with short video clips and memes of their K-pop stars.

In a recent tweet to its 26 million fans, South Korean boy band BTS said it opposes racial discrimination and violence and announced a $1 million donation to Black Lives Matter.

Protesters in US call attention to deaths of more Black men