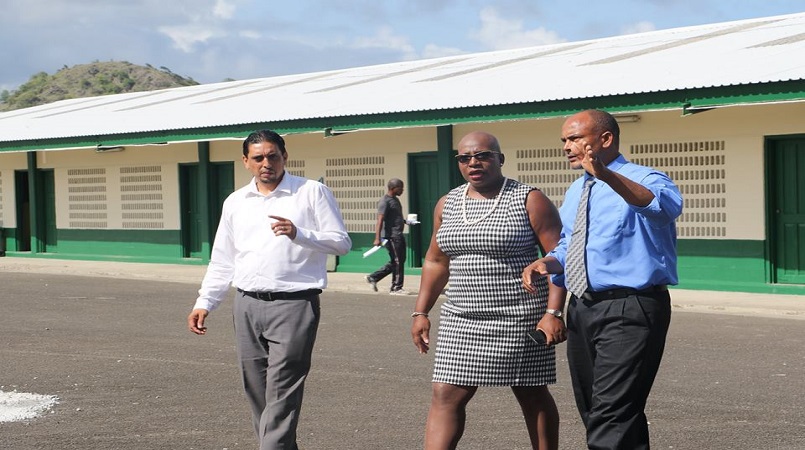 Blame is being passed around for last minute repairs at schools that were conducted right before the start of the new school term.

Education Minister Dr. Gale Rigobert told reporters that principals at certain schools were to blame having submitted infrastructural reports at late stages despite ample notice given by government to do so.

Rigobert said, “We sent out a circular, as we call it in the public service, to advise and invite principals to report infrastructural defects in their respective schools. We extended the deadline, then I came to this very room and spoke to you these very same personalities, and spoke to the principals through your media, encouraging them to report their defects as well. Would you believe that last week we were receiving information regarding infrastructural challenges at schools? Last week. That is, the week before school reopens.”

“Would you believe further that yesterday, yesterday, we got reports of infrastructural defects. And you know one of my team members asked the question: ‘did this happen over the weekend?’ Now, we know, that even those principals who submitted holistic reports about infrastructural defects in their schools, we could only undertake so much, but to have new reports emerging at this hour, at the 12th hour, and that is precisely what we were trying to preempt.”

Rigobert said despite the late works, the school infrastructure effort has been successful. She posted to her Facebook account, “Every year, on the first day of the academic school year I visit schools to take get a first hand experience on how students and teachers are settling in. Yesterday I was able to visit 4 schools, namely the Gros Islet Secondary School, Micoud Primary, Vieux Fort Primary School and Beanfield Secondary.

As I mentioned earlier, this year we invested $10 Million in the refurbishment of schools across the island. I was happy to hear from students and teachers about their satisfaction with our efforts at improving their learning environment. We did encounter some minor glitches at Micoud Primary with paint fumes and some of the furniture however this will be sorted out over the next few days.

After years of neglect, we still have a long way to go before we get all schools on island up to a satisfactory level but I am not daunted by this task. As Minister for Education I remain resolute in delivering a globally competitive Education system for the children and people of Saint Lucia.”