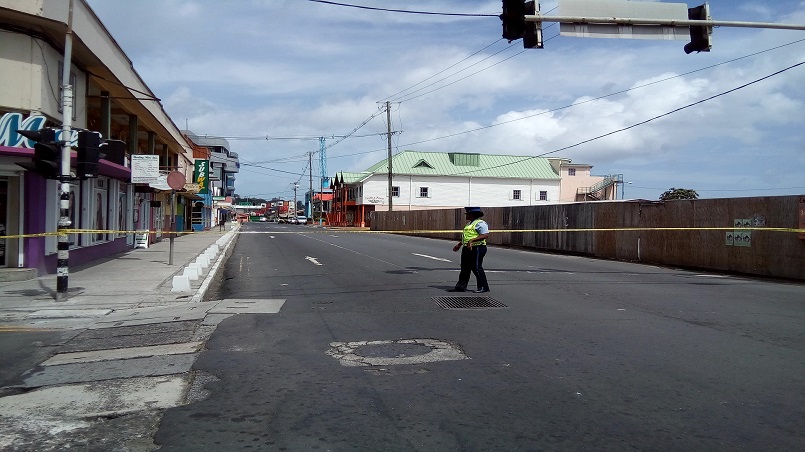 Traffic in downtown Castries came to a screeching halt at about 9:30 this morning as police investigated reports of a bomb in a major duty-free shopping center on Jeremie Street, one of the main thoroughfares in the city.

Investigators cordoned off the part of Jeremie Street that butts with Laborie Street and Bridge Street, closing shops and businesses in the immediate vicinity, like Customs and Excise and re-directing traffic to other routes.

The building targeted is called La Place Carenage Duty Free Shopping Plaza and is owned by the St. Lucia Air and Sea Ports Authority. Located on its second floor is the Commercial court. The rest of the building is taken up by duty-free shops and a restaurant.

Bomb scares have been a regular occurrence in St. Lucia, particularly in Castries for many years.

Businesses have been disrupted more than once so far this year as a result of such scares.

The situation had reached a stage where the Chamber of Commerce issued a call to persons engaged in such practices to desist from them as it costs the country too much in terms of lost hours and manpower.

The Chamber’s argument is that productivity is lost as police search through the premises to determine whether the call of a bomb was a hoax or not.

So far, all bomb threats have been hoaxes but this has not deterred police from taking the matter seriously.

One senior police officer commented that one can never know if the threat is real until it is investigated.

Student tourists robbed within hours of arriving in Castries