Boris Johnson tries to reassure on Brexit as pound slumps 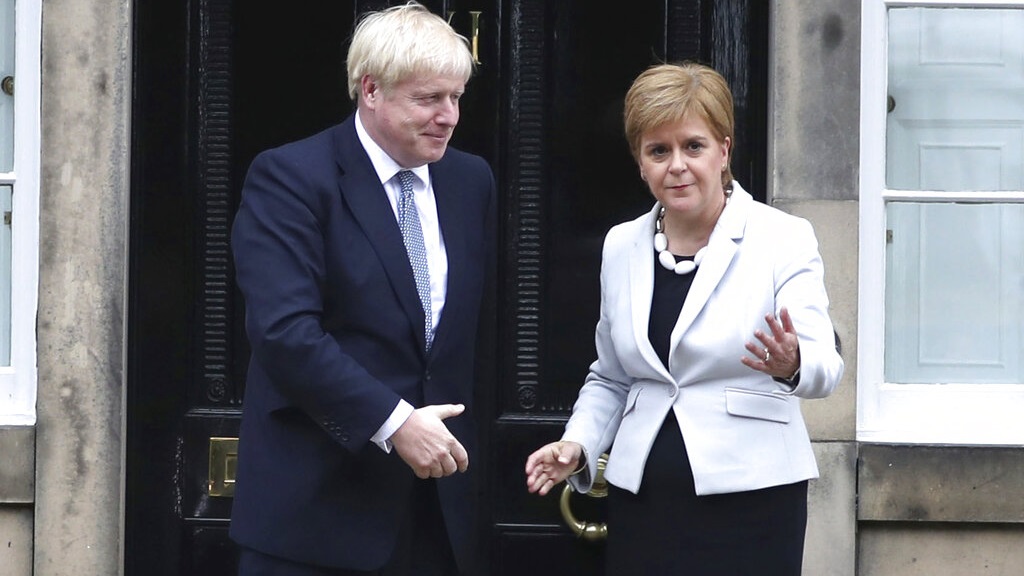 British Prime Minister Boris Johnson was visiting Wales on Tuesday as part of a national tour intended to reassure Britons that his hard-Brexit push won't hurt the economy and rip apart the U.K.

He faces a tough reception from farmers — a group central to the Welsh economy — who fear economic havoc if Britain leaves the European Union without a divorce deal. They say millions of sheep might have to be slaughtered if tariffs are slapped on lamb exports to the EU.

Johnson's office argues that leaving the 28-nation bloc and its rules-bound Common Agricultural Policy will be "a historic opportunity to introduce new schemes to support farming" and will open up new markets for U.K. agricultural exports.

The trip follows a visit Monday to Scotland, where Johnson was booed by protesters and warned by First Minister Nicola Sturgeon that his vow to take Britain out of the EU on Oct. 31, with or without a deal, was "dangerous."

Johnson, who took office last week, also plans to visit Northern Ireland, the only part of the U.K. to share a land border with the EU. The status of that currently invisible frontier with the Republic of Ireland has become the main stumbling block to a Brexit deal.

The pound has fallen sharply in recent days as businesses warn that no amount of preparation can eliminate the economic damage if Britain crashes out of the 28-nation trading bloc without agreement on the terms. The currency fell early Tuesday to $1.2120, its lowest since March 2017.

Johnson became prime minister last week after winning a Conservative Party leadership contest by promising the strongly pro-Brexit party membership that the U.K. will leave the EU on the scheduled date of Oct. 31, with or without a divorce deal.

The EU struck a withdrawal agreement with Johnson's predecessor, Theresa May, but it was rejected three times by Britain's Parliament. Johnson is insisting the bloc make major changes to May's spurned deal, including scrapping an insurance policy for the Irish border that has been rejected by U.K. lawmakers.

Johnson's government has been accused of sending mixed messages on Brexit that have unsettled markets.

Michael Gove, who heads a new Brexit delivery committee in Cabinet, has said the government is "operating on the assumption" that the U.K. will leave without a deal.

But Johnson — who just weeks ago put the odds of leaving without a divorce agreement at a million to one — said Monday he was "very confident" of getting a new deal.

There are currently no new negotiations planned between Britain and the bloc.