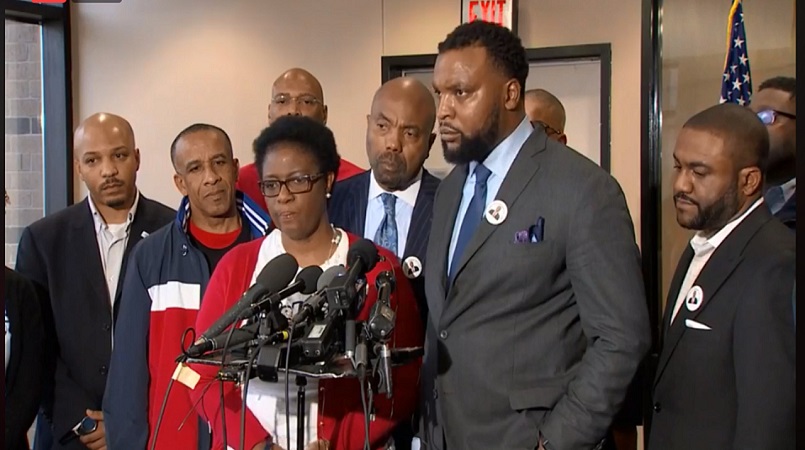 Allison Jean said, "I am indeed satisfied with the indictment for murder of Amber Guyger because I truly believe that she inflicted tremendous evil on my son. He didn't deserve it, he was seated in his own apartment, he felt safe in that apartment, and he was violated by her coming in and murdering him. So from the very start, I knew that she murdered him and I was not satisfied at the manslaughter charge.

I want to thank the Dallas community for the persons who have been rallying with us during this most difficult time, my county St Lucia, the entire population of St Lucia has been on alert with the expectation that the grand jury would have returned an indictment for murder. My church membership have all been praying and all St Lucians and church members over the world have been standing with us and I'm truly grateful for that.

Allison's comments begin at the 27th minute in the video below

I want to thank the DA's office, particularly DA Faith Johnson, for the work that her staff have put into gathering evidence and presenting to the grand jury in order to return such an indictment.

I look forward to the next step which is a conviction of murder of Amber Guyger and more so of a penalty - the proper penalty - that will cause her to reflect on what she has done and the pain that she has caused not only my son but my family, my church, my country. So I'm depending on you to continue to rally with us as we seek continued justice for him."

Bertrum Jean said, "We want to give thanks first to the DA's office for the work that they put in to ensure this result today. Our family, as my wife said, we are hurting deeply but we take some comfort at this time with the decision that the grand jury reached. We really hope that our hearts will be comforted even more. It is such a hard thing to go through. We miss our boy dearly. He didn't deserve that, he was such a sweet boy, in his home. How can we move on without him but we will try.

We say thank you to our attorneys who are there with us as we continue that fight. We will remember him, his legacy will live on. We pray that we will continue to trust God to deliver us. We also pray for Amber that she will recognize what she has put us through in our family, and the entire world, everyone has been touched, so many folks have been touched by this incident. So we really are just, not happy but we take consolation, we take comfort at this time with this result. We go back to our homeland with much grief. We have a younger son growing up, we don't even know how he's feeling, so it's really hurting but at this time we are just elated at the grand jury result."

Allison Jean also said that the unusually long grand jury process was nerve-wracking but she found comfort in the thorough presentation by the DA's office.

When asked if she felt Guyger still has an opportunity to come clean, Allison said, "Absolutely, during the trial, she still has a chance to come clean, the only thing is every time I read an account of what happened on September 6th, it's different to what I heard the first time. So it shows she's messy... if you're saying the truth then you don't have to change all of the different narratives... the simple thing as the number of hours she worked that day, we have not gotten exactly how many hours she worked. It started at 16, then it was at 15 then it was at 12. We don't know. So the very change of what occurred reduces her credibility."

Allison Jean gets answers after meeting with Dallas District Attorney

Amber Guyger's lawyer says she was fired prematurely and unfairly