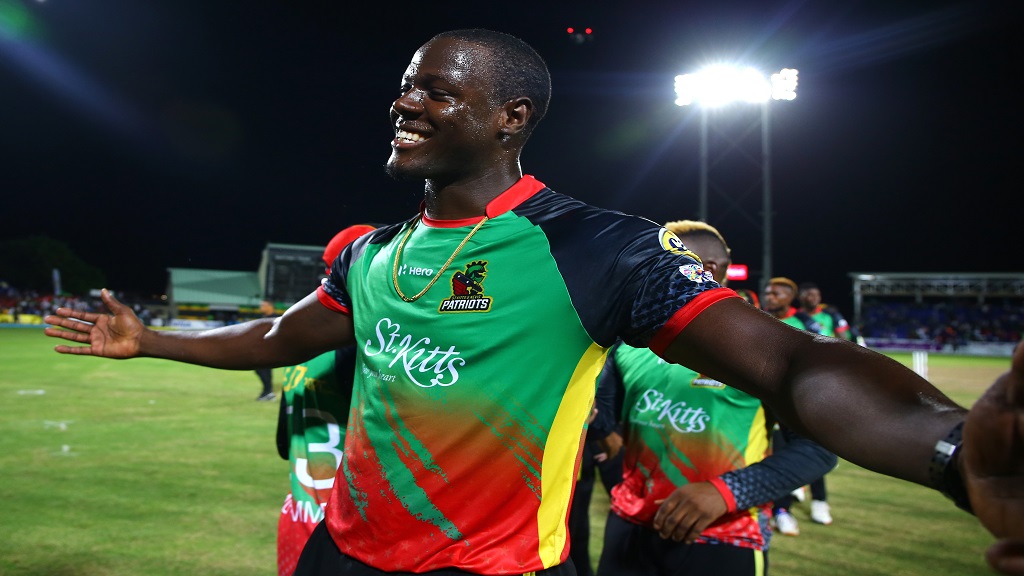 Carlos Brathwaite was the all-round hero in a stunning St Kitts and Nevis Patriots super over victory as Trinbago Knight Riders’ (TKR) winning start to the 2019 Hero Caribbean Premier League (CPL) came to an end in the most dramatic possible way on Tuesday at Warner Park in St Kitts.

Brathwaite first made 64 from 30 balls to get the Patriots’ pursuit of the Knight Riders’ 216 for four back on track after they slumped to 80 for four. When the scores ended level after 20 overs each, Brathwaite then smacked two sixes and a four to take the Patriots to 18 without loss from their Super Over before bowling six nerveless deliveries as TKR mustered only five for one in reply.

In regulation time, Lendl Simmons had continued his run of fine form with a 45-ball 90 that set the Knight Riders on their way to another big total. 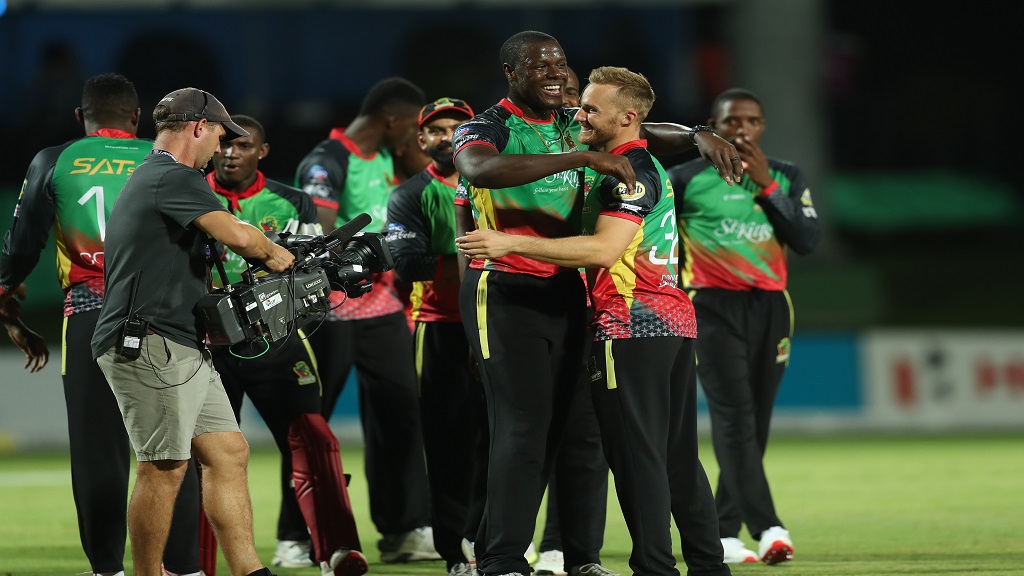 But another explosive contribution from Evin Lewis at the top of the order and Brathwaite’s spectacular intervention got the Patriots within striking range.

Veteran all-rounder Rayad Emrit then flayed an unbeaten 21 from 11 balls with two sixes and, most importantly, a four sliced down to third-man from the final ball of the innings to bring the scores level and send the match into the first super over of the 2019 Hero CPL.

A required rate that had approached 15 at one stage had been brought right down to 62 runs from the last 30 balls by Brathwaite before Ali Khan made what seemed the telling contribution with the wickets of Brathwaite and Fabian Allen to end with two for 27 from four overs on a night when bowlers generally took a pounding. 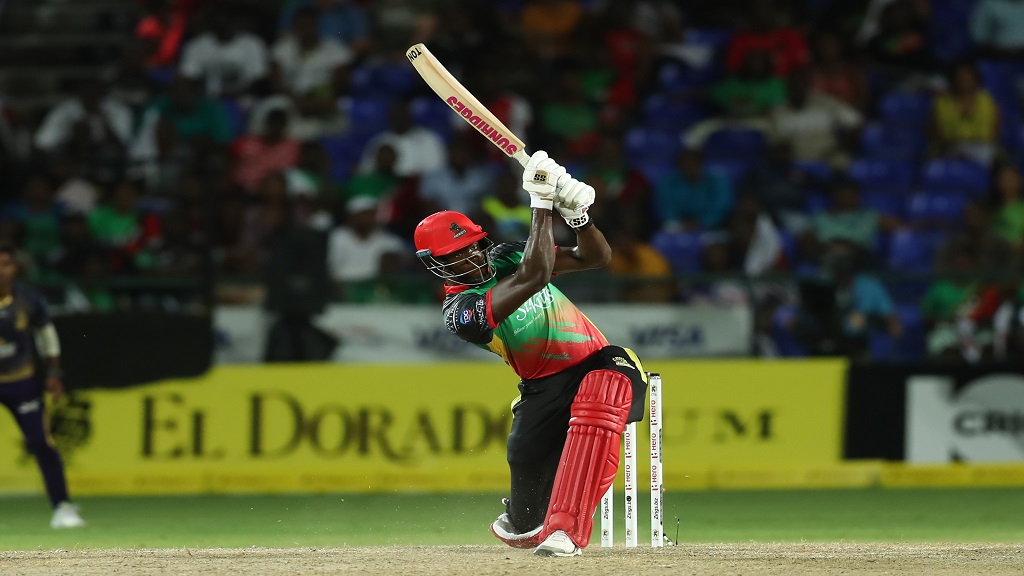 Carlos Brathwaite hits a six during the super-over.

None more so than James Neesham, who bowled the fateful final over of the regular match and conceded a record-breaking 68 from his four overs in all. And on his 29th birthday.

Lewis set about spoiling the birthday celebrations with a boundary blitz in Neesham’s first, taking 30 runs from an over which, thanks to a wide, cost 31 in all.

It included three sixes down the ground as well as three fours and took the Patriots rattling along to 59 for one after the fourth over, Devon Thomas having fallen to Anderson Phillip early.

But the Knight Riders aren’t champions for nothing. They immediately put the squeeze on the Patriots and conceded only 17 runs – while picking up the key wickets of Laurie Evans and Lewis – in the next four overs to take a firm grip of the game once more.

Both men, like Thomas, fell to Phillip, whose tactic of bowling wide to Lewis was a smart one that brought big rewards from a sliced drive that carried out to Kieron Pollard on the cover boundary.

That was Pollard’s 49th Hero CPL catch and a pretty straightforward one. His 50th came in the very next over and was anything but, a sensational leap and one-handed grab to pluck the ball out of the sky just inside the boundary to remove Mohammad Hafeez.

At 80 for four, the Knight Riders appeared well set for victory but Brathwaite had other ideas. His second ball disappeared into the stands and he dealt chiefly in boundaries from then on, bringing up his half-century in just 22 balls and keeping the required rate in check.

That proved so important in allowing Emrit’s late flurry to take the match into the tie-breaker where the Patriots were comfortable winners.

Ali Khan, so impressive in his four regular overs, couldn’t quite nail his yorkers in the super over and with Brathwaite, in this kind of mood, it proved oh so costly. The first ball was smoked back past the bowler for six, with another following over square-leg three balls later. The final ball was again hit back past the bowler with interest for a one-bounce four.

The Knight Riders never got close in reply, Darren Bravo edging the second ball behind having made no contact with the first. By the time Pollard dispatched ball five to the boundary the game was up.

Way, way earlier in the night, Simmons had made his third successive half-century, after scores of 63 and 86 in his last two outings against St Lucia Zouks and Jamaica Tallawahs, which was also enough to take him clear of Chris Gayle at the top of the 2019 Hero CPL run charts.

His quick-fire partnership of 49 in just four overs with Mark Deyal set the ball rolling. Deyal was the initial aggressor, clearing the ropes twice in nine balls before miscuing a Brathwaite full-toss to mid-on to depart for 21.

Colin Munro hit Brathwaite for a six and a four in the final over of the power play but was generally content to play second fiddle to Simmons, who was in electric form.

He brought up his 50 in just the seventh over of the innings, uppercutting Emrit over the third-man boundary for his second six and really cut loose from there.

Four more sixes followed in the space of eight balls from Hafeez and Alzarri Joseph but, just when it appeared certain a Hero CPL century was his, Simmons was undone. Surprised by a well-directed bouncer from Sheldon Cottrell, Simmons attempted to bail out of a pull shot but couldn’t do so in time and managed only to sky the ball to point 10 runs short of three-figures.

The Patriots were then able to drag things back nicely despite Pollard’s arrival in the middle. After conceding 136 in the first 11 overs, the Patriots gave up just 20 in the next four.

Munro and Pollard were dismissed in quick succession, with momentum restored to the innings as Bravo and Neesham sent the total soaring past 200 with an unbroken fifth-wicket partnership of 40 in the last three overs.

Neesham hit four fours in his 13-ball 22 not out, while Bravo – who has hit more sixes than fours in his Hero CPL career – stayed true to form with two big sixes in his unbeaten 24 from 12.

It would prove not quite enough, though, as  Neesham suffered more super over disappointments.

Dinesh Karthik apologises to BCCI after appearing at 2019 CPL