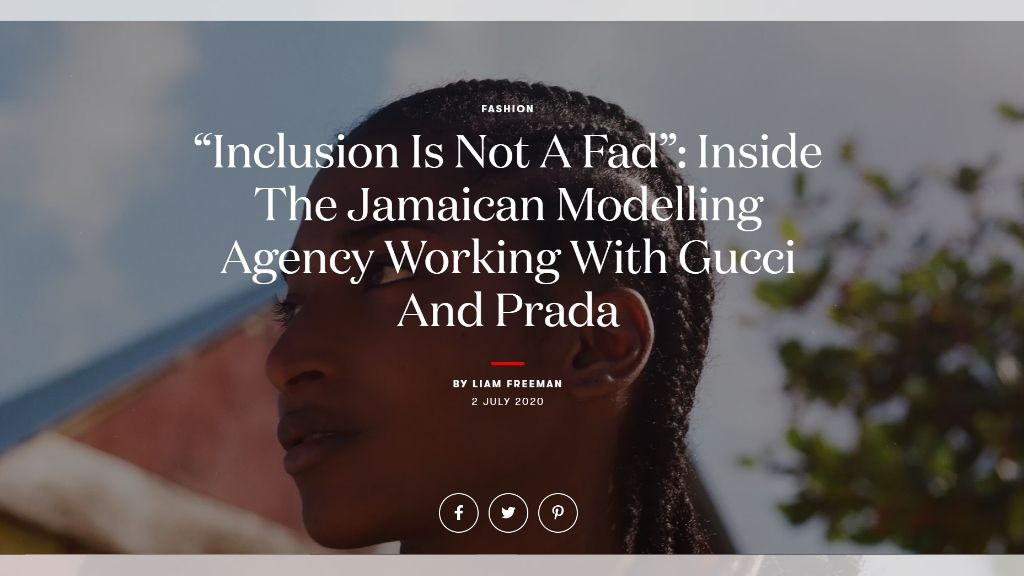 Saint International model Tash Ogeare’s strong facial features are the focus of this image from a screengrab of the British Vogue article spotlighting her mother agency Saint International. (Photo: Vogue.co.uk)

Saint International is yet again hot on the international news circuits, following a recent spotlight feature in British Vogue.

The 'Inclusion Is Not A Fad'-titled article featured Peters in convo with Vogue journalist Liam Freeman and 11 images from an editorial shot by Jamaican photog Ekua King.

Naturally, King also chatted briefly with the nine fresh-faced Saint models – a few of whom have worked for storied fashion houses internationally.

Peters is receiving his flowers, and rightly so, celebrating a 20-year milestone in an industry as fickle as the fashion industry is no joke.

The model-maker has been the topic of standalone features from American Vogue, Forbes, and the New York Times.

“It’s been a thrilling journey with major challenges but an abundance of sweet accomplishments. I guarantee my book will be best-seller when the story is told,” he reflected.

“But we’re just getting started as there are bigger and greater things on the horizon for Saint models.”

The timing is perfect

Saint International is celebrating a remarkable 20-year milestone with a new signature brand identity – a dynamic exposé at its saint models website.

Today, the Saint story is as relevant as it is poignant.

This, at a time when the world is faced with the powerful ‘re-awakening’ of the civil rights/anti-racism movement as expressed through the Black Lives Matter movement.

“Social media has democratised things; you no longer have to rely on a big international agency.

But you have people at the top of the [industry] who may still not understand the power of inclusion. Inclusion is not a fad,” Peters told Freeman.

How it all started

Leaving behind a promising career in finance, Peters founded Saint International in 2000 to fulfil his entrepreneurial ambitions of making stars out of Jamaicans.

He’s done much more than that, however.

Peters has managed the careers of a cavalcade of homegrown talent and landed advertising campaigns for the world’s most prestigious and coveted fashion brands.

In the article, Peters even mentioned a budding relationship with the decorated Grace Wales Bonner — who was featured just yesterday by Loop News for her recent Reggae-fused collection.

“Saint International is the only agency in this hemisphere with the kind of reach and demonstrated achievement to prove its success,” said an understandably proud Peters.