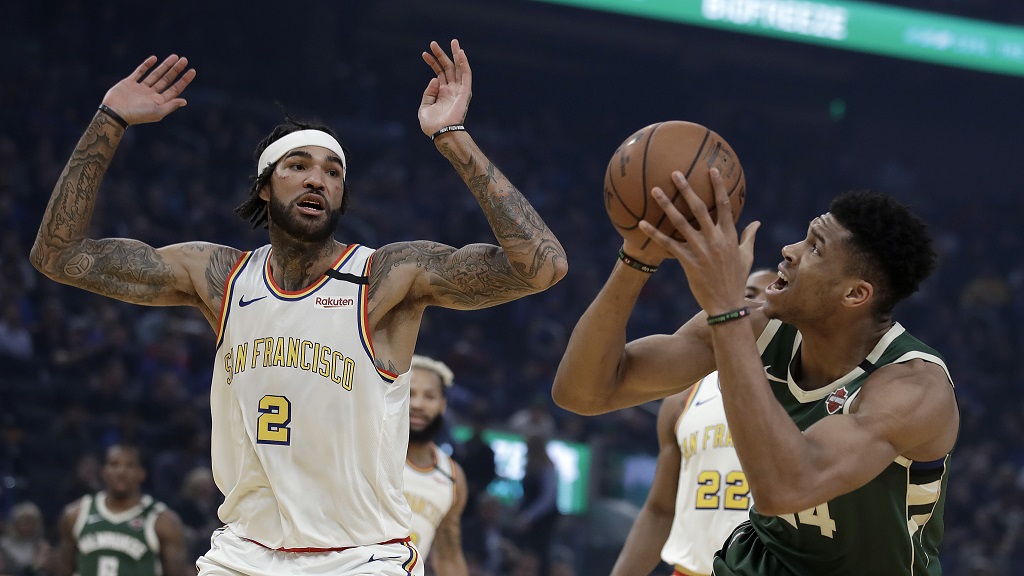 The Milwaukee Bucks returned to winning ways with a 107-98 victory over the Golden State Warriors, while James Harden's triple-double inspired the Houston Rockets.

NBA leaders the Bucks bounced back from their loss to the San Antonio Spurs by topping the Warriors away from home on Wednesday.

Reigning MVP Giannis Antetokounmpo led the way with 30 points and 12 rebounds as the Bucks improved to 33-6 for the season, while Khris Middleton added 21 points.

Alec Burks top-scored for the Warriors with 19 points off the bench in San Francisco.

James Harden moved up to eighth on the all-time triple-doubles list with his performance in the Houston Rockets' 122-115 victory over the lowly Atlanta Hawks. He recorded 41 points, 10 rebounds and 10 assists.

Nikola Jokic led the Denver Nuggets to a nail-biting 107-106 win at the Dallas Mavericks. Jokic scored 26 of his 33 points in the second half, including the game-winning basket with 7.9 seconds remaining in Dallas. Luka Doncic posted 27 points and 10 assists for the Mavericks.

Just two days after posting a season-high 36 points, T.J. Warren had a game to forget as the Indiana Pacers lost 122-108 at home to the Miami Heat. Warren managed only three points before being ejected after sarcastically applauding a foul on Jimmy Butler.

The Nuggets did not get their usual output from star Jamal Murray, who was seven of 18 from the field for 14 points in 31 minutes. He also missed all three of his attempts from beyond the arc.

Kemba Walker also had a tough night in Boston. The Celtics star was ejected for arguing a non-call after a hard pick by LaMarcus Aldridge in the third quarter. He had six points in 18 minutes.

After falling to the Spurs, the Celtics (25-10) will face Eastern Conference rivals the Philadelphia 76ers (24-14) on the road. The 76ers, who will be without All-Star Joel Embiid, are eyeing back-to-back wins.