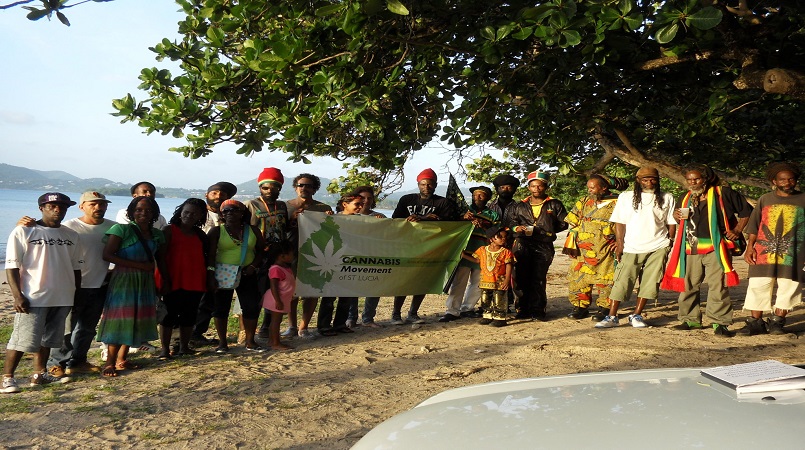 The Cannabis Movement of St. Lucia is calling for the legalization of marijuana and an immediate amnesty on incarceration for any person serving a sentence for a cannabis crime that is non-violent.

The Movement, which for years has been championing the decriminalization of cannabis, said that there should be no remand for violations of cannabis laws, no incarceration for any cannabis crime, only financial or non-custodial penalties, and the obliteration of all cannabis criminal records.

The Movement’s demands are contained in a recent letter to the Cannabis Commission in which it proposed several areas the Commission should look into as a way forward in dealing with the issue of legalizing the plant.

The Movement says it will hold a press conference tomorrow to explain its proposals but cautioned, stating that although there are many positive aspects to legalizing cannabis, there are also certain public health issues that must be recognized and addressed.

The Movement pointed to the potential use by minors and the mentally challenged; the issue of Chronic obstructive pulmonary disease (COPD) brought on prematurely by the use of tobacco mixed with ganja, and the potential abuse of ganja itself, claiming that these are some of the issues that need to be examined.

“With legalization, education and health programs can be put in place to deal with these issues in order to protect the most vulnerable.  We would propose that a national cannabis education programme be developed, aimed at delaying use till 18 years and consolidate all public smoking regulations for tobacco and cannabis,” wrote the Movement in a release last week.

The Movement wants hemp removed from the Act and withdrawn from regulation as this will allow the Industrial Hemp initiative, began in 1998, to move forward and conduct research trials on hemp in order to develop a cultivar or cultivars that could be introduced into the country’s agricultural diversification program.

“The intention still is to fully utilize as much of the raw material derived from the Cannabis plant as possible, to nucleate a host of other potential industries -  high end body care, clothing, food and medicine to name a few,” noted the Movement.

According to the Movement many countries are rapidly reforming their Cannabis laws after the decades long “War on Drugs” that was a total failure but which destroyed the lives of people everywhere and wasted billions of dollars in criminal justice systems the world over.

“The framework that currently exists – in our Misuse of Drugs Act – falls terribly short of what was intended as many Saint Lucians consume cannabis on a daily basis regardless of the law. The intention of creating an Improved Regulatory Framework is to minimize the harm associated with cannabis consumption, possession, cultivation and trafficking; while maximizing the plant’s potential benefits, in terms of both health and the economy,” noted the Movement.

The Movement claimed that successive administrations had put most of their focus on the tourism sector while completely neglecting agriculture resulting with the country imported over $450,000,000 worth of food in 2016 with the food import bill increasing every year.

“We hope that legalization will spawn a new agricultural revolution, creating jobs, reducing crime, improving the health of our people, while reducing our food import bill,” claimed the Movement which intoned that there are several reasons for Saint Lucia to legalize cannabis, with one of the most important being the economic benefits it will bring.

“We are already well involved with coconuts and coconut oil, cocoa and several other locally grown crops that can help to create and augment the overwhelming range of fine Cannabis products that potentially are well within our reach to explore.  Hemp can help reestablish both the coconut and cocoa industries that have been in decline for years and give these farmers the ability to earn a decent living from these crops once more,” explained the Movement.

It claimed that apart from the multitude of hemp products that can be produced, the ganja produced organically and outdoors can provide for the already lucrative local recreational market that is estimated to be worth about EC $50,000,000 per year.

“In addition, our already established and developing tourism economy can be leveraged even further by providing both hemp and ganja products in safe and secure environments.  And medicinally, ganja can be produced for export as well as for local healing and can be the foundation for a new and vibrant wellness tourism industry.

“Ganja farmers who were once considered criminals will now be accepted as respected farmers and business people contributing to the local economy.  No longer will our most potentially productive youth be criminalized and jailed for their involvement in a niche market that was criminalized for all the wrong reasons,” the Movement noted.

Marijuana decriminalization on the horizon?