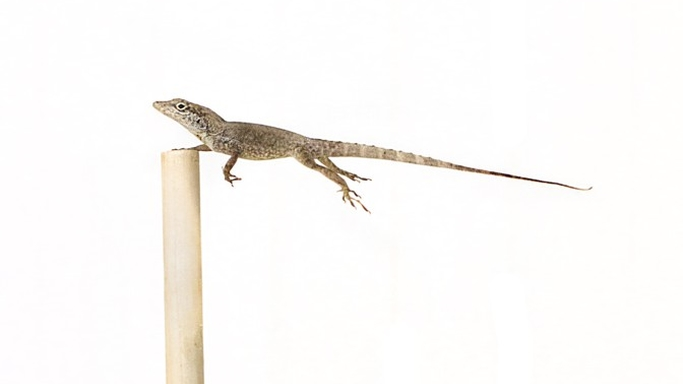 While Caribbean islands are focused on reducing the destructive effects of hurricanes by building resilient countries, it seems lizards have already gotten a jump on surviving the storms.

A group of scientists has discovered that lizards in the Caribbean have evolved to survive hurricanes and that natural selection was at play.

The lizards in question were discovered on in the Turks and Caicos.

Writing in the Nature magazine, scientist Colin Donihue said prior to Hurricanes Irma and Maria last year, his team did a study on Anolis Scriptus, a small-bodied lizard in the Turks and Caicos.

When they returned after the Hurricanes, they discovered that the surviving lizards differed in limb length, toepad and body size than previous lizards.

They found that the toepad surface area and limb lengths were larger which predicted to improve clinging ability.

To test their hypothesis, Donihue and his colleagues placed lizards on small wooden posts and subjecting them to gusts from the largest leaf blowers they could find.

The lizards held on for dear life but because of the way their legs are structured, their hind thighs would always jut out. These exposed thighs caught the wind like sails, and would eventually rip the lizards from their secure footing and into the safety nets the team had set up.

With shorter thighs, you’re catching less wind,” Donihue said in an interview with the Atlantic.

Donihue said with storms becoming more frequent and stronger, we may see more examples of their evolutionary impact.

Hurricane ravaged islands back in business, preparing for 2018 season

Get ready for Hurricane season with these essential supplies