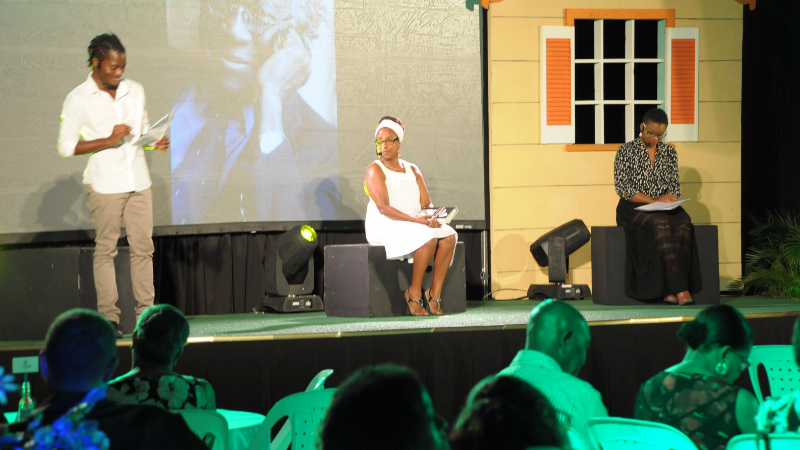 Fighting words, soothing words, funny words - the 'Word for Word' Literary Signal Event of CARIFESTA XIII had it all.

Patrons came out to the Sir Garfield Sobers Gymnasium on Tuesday night to lend an ear to contemporary West Indian writers who paid homage to literary icons who inspired them.

Barbadian novelist, Karen Lord, led the discussion on 'In The Castle of My Skin' by George Lamming. Lord’s writes on fantasy and science fiction and her latest publication, 'The Galaxy Game', used the theme of alienation and migration to draw a parallel to two novels. During her reading, Lord said her writing explores a new vision of the region, not limited by geographical or physical location but rather extends out to include the entire Diaspora. In that way, where ever Caribbean people migrate, they will always be home.

Jamaican novelist and story writer, Olive Senior, sang the praises of Claude McKay during her reading. Senior explained she often felt conflicted, as a young writer, because it was viewed as taboo at the time to tackle topics about life in rural Jamaica. However being led by McKay’s work, she said she felt a sense of affirmation that she could address these topics in her writing.

Renowned Barbadian poet, Kamau Brathwaite was recognised by Jamaican writer, lecturer and blogger, Kei Miller. The pairing of the two writers, Miller and Brathwaite, was literary brilliance and made the reading one of the highlights of the night. Miller spoke on the need to draw inspiration from great writers saying “only mediocre writers try to be original”. Miller read from Brathwaite’s “Stone for Mikey Smith”, a poem about a Jamaican poet who was stoned to death during a political rally. By the time Miller completed his reading the hearts of the audience were all mourning for Mikey Smith.

Another highlight of the event was the tribute paid to the late Austin “Tom” Clarke with readings from three of his works, ‘Growing up Stupid Under the Union Jack’, ‘The Polished Hoe’ and ‘Pigtails and Breadfruit’.

The event closed with the launch of one of Kamau Brathwaite’s latest publication ‘Strange Fruit’. The collection of poems, drawn from the Billie Holiday song, focuses on the experience of cultural lynching Brathwaite felt when he resided in New York and how he resettled in Barbados to escape it.

Come out to CARIFESTA events!