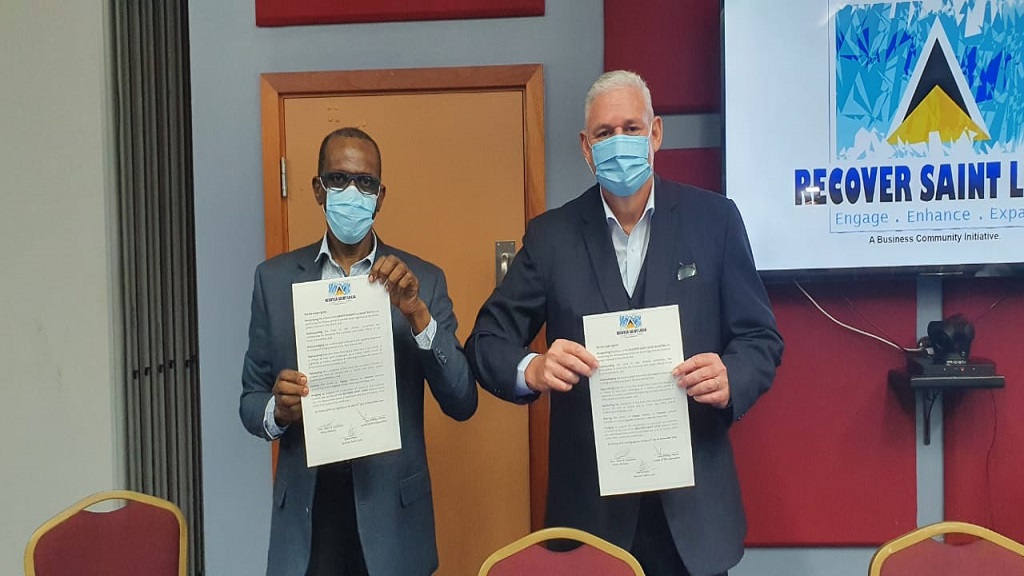 Prime Minister Allen Chastanet and Opposition Leader Philip J Pierre joined together in signing a Memorandum of Understanding at the launch of the Recover Saint Lucia initiative this morning (November 20).

Pierre remarked on the rare occasion saying it was not often that he and the prime minister find themselves in a situation without some level of confrontation, but that the seriousness of the pandemic had outgrown politics.

Prime Minister Chastanet said, “Today is a good day because it speaks to our shared sense of responsibility and by having the private sector, very diversified, as well as the Leader of the Opposition here and myself representing not only the government... but the United Workers Party, in that COVID is hopefully going to teach us a very important lesson because we have no choice but to come together as a nation."

The initiative came about as a diverse group of Saint Lucia’s private-sector agencies and business people joined together to help rally citizens, companies and communities to accelerate recovery from the economic and health effects of the COVID-19 pandemic.

The support of both of the nation's main political parties and the leadership coming from the private sector seeks to bridge political gaps to create a united front against the COVID crisis.

Pierre stated: "I'm here today because I really believe that Saint Lucia can prosper, I'm also here because, in spite of my opposing view... and that many of us in the opposition do not agree with many things, we agree that we all love Saint Lucia. Even though sometimes we may have contrary views, these views do not mean that we want our country to be destroyed."

My party will endorse and support any initiative that benefits the people of Saint Lucia and that initiative must have at its basis, equity. Everyone should get an equal opportunity to share in the benefits of that initiative."

Prime Minister Chastanet said, "I want to applaud the initiative and pledge the support of not only the United Workers Party but also pledge the support of the Government of Saint Lucia on this initiative and I'm hoping that this will continue because the COVID issue is just one single issue that requires a unity of purpose... of things in which we must find ourselves in the future not undermining in the name of politics, of oneupmanship."

Pierre said: "I want to thank the business people in Saint Lucia for coming forward, for taking this bold step to cause some change to make Saint Lucia recover. It’s not going to be easy, I pledge the support of my party and in spite of the suspicion that exists... of a level of patronage, of a level of nepotism, or a level of where one side will win and the other side will lose, both sides can win if we get together to fight this pandemic."

The prime minister spoke in response saying, "We have to, on certain critical issues, agree to disagree in closed doors but when we leave the door and we speak with a voice outside in the world, that we speak with one... That's why I'm really excited today because I'm really hoping that we can start finding the mechanism, as Philip says, to overcome the distrust, and work together on key national issues."