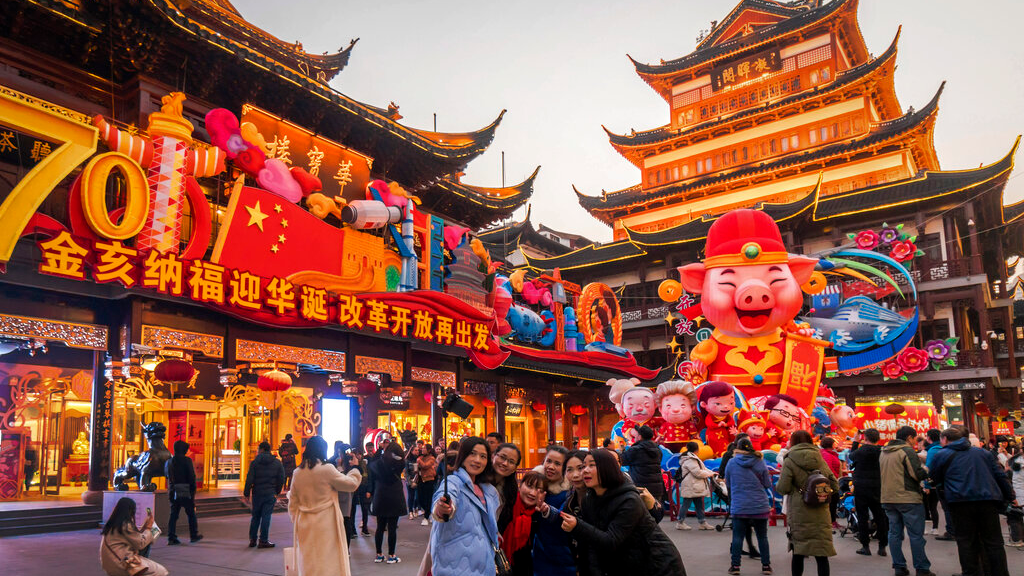 In this Jan. 17, 2019, photo, women take a selfie as others tour at the Yu Garden decorated with pig statues for Lunar New Year in Shanghai. China’s 2018 economic growth fell to a three-decade low as activity cooled amid a tariff war with Washington. (Chinatopix via AP)

China's economic growth hit a three-decade low in 2018, adding to pressure on Beijing to beef up stimulus measures and settle a tariff war with Washington.

Forecasters said they expect Beijing to try to shore up growth by making credit cheaper, raising government spending and adopting measures to encourage sales of autos and consumer goods.

Communist leaders want to steer China toward slower, more self-sustaining growth driven by consumer spending instead of trade and investment. But the slowdown has been sharper than expected, prompting Beijing to boost spending on construction of roads and bridges and to order banks to lend more, especially to the entrepreneurs who generate most of China's new jobs and wealth.

"Downward pressure on the economy is increasing," the commissioner of the National Bureau of Statistics, Ning Jizhe, said at a news conference. He cited import controls, volatile financial markets and declining investment spending as factors.

Still, Ning insisted China can resist shocks, saying "the long-term trend of stability will not change."

Economic growth in 2018 was the lowest since 1990's 3.9 percent following the violent crackdown on pro-democracy protests centered on Beijing's Tiananmen Square.

Growth in the last quarter of 2018 dipped to 6.4 percent — the lowest quarterly level since the 2008 global crisis — from the previous quarter's 6.5 percent.

"The government is expected to implement more fiscal and monetary stimulus measures to support economic growth," Yanjun Lin of IHS Markit said in a report.

Growth in investment, retail spending and factory activity all declined, though analysts pointed to a flicker of improvement in manufacturing in December. It grew by 5.7 percent over a year earlier, up 0.3 percentage points from November.

The trade dispute with the U.S. is proving costly.

Exports held up through most of 2018 despite President Donald Trump's tariff hikes on Chinese imports in a fight over Beijing's technology ambitions. But they contracted in December as the penalties began to depress U.S. demand.

The two sides have imposed tariff hikes of up to 25 percent on tens of billions of dollars of each other's goods in the fight over U.S. complaints that Beijing steals or pressures companies to hand over technology. Washington wants China to roll back plans for state-led industry development that its trading partners say violate its market-opening obligations.

The trade dispute, and reports of job losses and tumbling sales of autos and real estate, have unnerved Chinese consumers that Beijing is counting on to drive growth. As pocketbooks snap shut, the downturn could worsen.

China's top trade envoy, Vice Premier Liu He, is due to visit Washington for talks Jan. 30-31.

Business groups and economists said a decision by Liu and his American counterpart, Robert Lighthizer, to get directly involved would suggest earlier talks by lower-level officials made progress.

Trump said Saturday that trade relations with China were "going very well" and "a deal could very well happen."

Forecasters expect Chinese growth to bottom out this year as Beijing's stimulus efforts gain traction. However, they have pushed back the time frame for that due to weakening exports.

Public works spending "is shaping up to be the engine for 2019," Iris Pang of ING said in a report. "However, non-infrastructure business activities will be dismal this year. And debt will grow."

A meeting of Communist Party leaders in December promised tax cuts, better access to bank lending for entrepreneurs and other steps to help the private sector.

Chinese leaders have been warning that any recovery would be "L-shaped," meaning that companies and investors shouldn't expect growth to rebound to the previous decade's double-digit levels.

Forecasters expect growth to decline further this year to 6.3 percent or lower.

"China's economy is likely to weaken further before growth stabilizes in the second half of the year on the back of expanded policy stimulus," Julian Evans-Pritchard of Capital Economics said in a report.