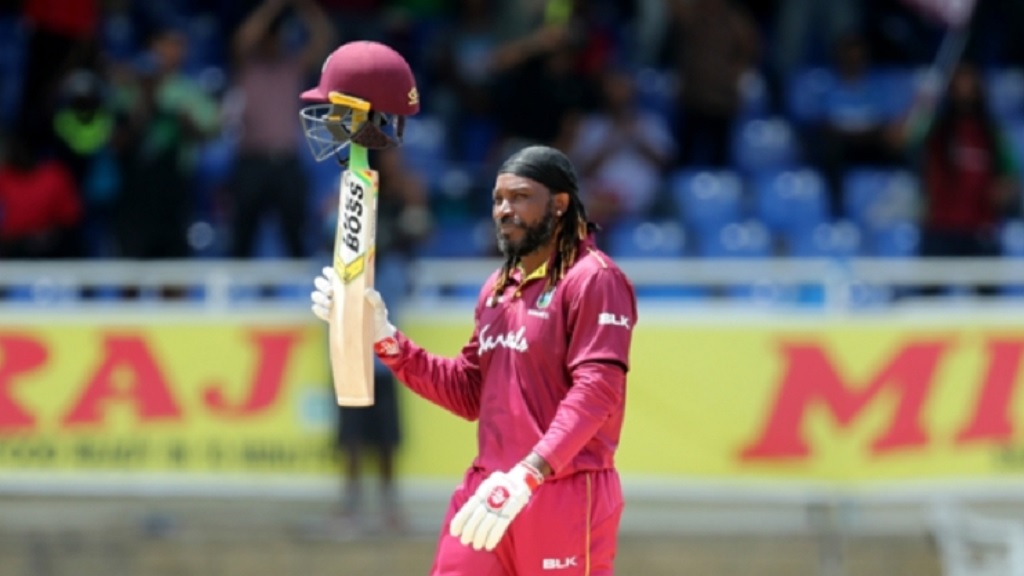 Chris Gayle looks to have played his final ODI innings.

Chris Gayle scored a typically brutal half-century in what looked set to be his final ODI appearance for West Indies.

Three days after he overtook Brian Lara to become West Indies' record run-scorer in the format, Gayle flayed India's bowlers for a 41-ball 72 in Port of Spain.

Boundaries accounted for 62 of the runs from the tall left-hander, who hit eight fours and five sixes in a crowd-pleasing innings.

It came to a tame end when he looked to play another big shot against Khaleel Ahmed, who had come in for early punishment.

Rather than find the ropes again, Gayle picked out India captain Virat Kohli at mid-off and the catch was safely taken.

Gayle, whose match shirt carried the number 301 to signify his number of ODI appearances, was surrounded by well-wishing Indian fielders after his innings ended.

He chose to play on after West Indies' disappointing Cricket World Cup performance, despite saying in March he had played his final home ODIs.

But the 39-year-old signalled this would be his last ODI series, and if he stays true to that decision it will leave him free to concentrate on a lucrative T20 franchise career.

India's players offered what appeared to be warm words to Gayle, who walked off in a theatrical manner with his bat raised, his maroon batting helmet balanced on its top.

West Indies and India were contesting the final match in their three-game ODI series and, besides the attention on Gayle, there was plenty to play for.

The first was abandoned due to rain, before India won the second match that, like Wednesday's contest, was also played in Port of Spain.

Rain has now stopped play with West Indies on 158 for two from 22 overs with Shimron Hetmyer on 18 and Shai Hope on 19.

Evin Lewis made 43 from 29 balls in an explosive opening stand of  115 with Gayle.