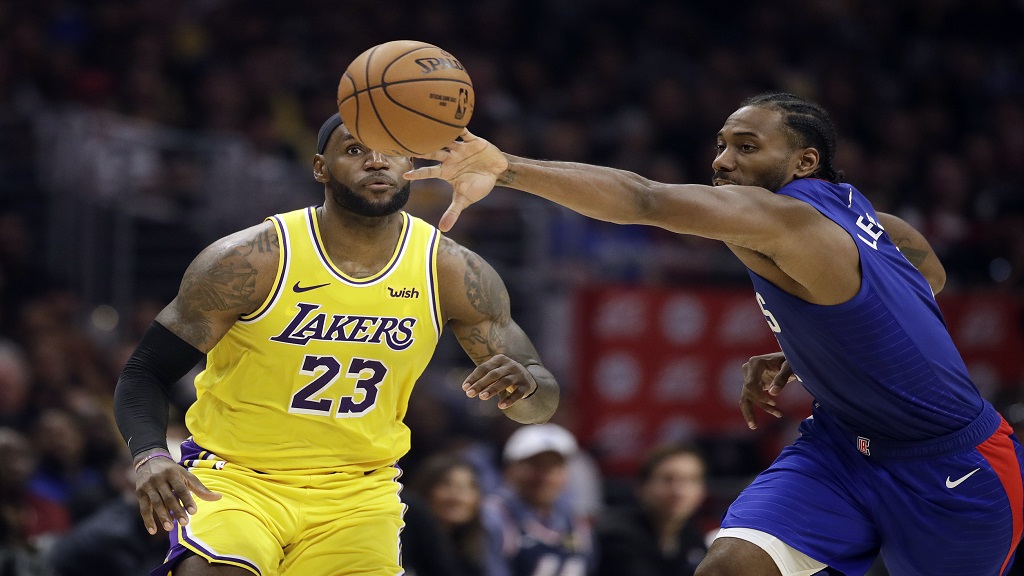 In the battle of LA, Leonard enjoyed a winning debut as the Clippers beat the Lakers 112-102 on Tuesday.

In the early game, defending champions the Toronto Raptors outlasted the New Orleans Pelicans 130-122 after overtime.

Toronto are no slouch

The departure of Leonard will be a popular topic of discussion surrounding the Raptors this year, but they showed Tuesday that they can still play at a high level. Although Toronto's leader, Kyle Lowry, struggled from the field against the Pelicans and made just four of his 15 shot attempts, his team-mates showed they made some improvements over the offseason.

Pascal Siakam let the game come to him, even fresh off his $130million extension. Last year's Most Improved Player tallied 34 points, 18 rebounds and five assists in an astounding performance that showed he can be all Toronto want him to be. He fouled out of the game before overtime but produced an all-around game few others can match.

Even more surprising was Fred VanVleet, who notched a career-high 34 points and seven assists on five made three pointers. The Raptors are so much more than Leonard and can be even better when Lowry is firing on all cylinders as well. Toronto might not win the Eastern Conference, but they will definitely be a competitive team and playoff contender.

Pelicans more loaded than we thought

New Orleans came at the Raptors hard and fast in this year's season opener and showed flashes of what they can be given time. The Pelicans acquired a plethora of young pieces over the offseason via trades, free agency, and the draft. Those assets came together nicely even though they have not been together long.

Brandon Ingram paced New Orleans with a team-high 22 points while Jrue Holiday, JJ Redick, Nicolo Melli, and Josh Hart all scored in double figures. The Pelicans' second unit featured some unexpected line-ups and struggled at various points, though, so the rotations could need some tweaking. However, competing with the team who won the NBA Finals last season on the road is no small feat, and that should not go unnoticed.

The Pelicans' promising game comes on the heels of news that superstar rookie Zion Williamson will be sidelined to start the campaign as he recovers from a meniscus procedure. The Western Conference is a different beast, but there is no telling what the ceiling could be for New Orleans.

The battle for Los Angeles will be really fun to watch

Neither the Lakers or Clippers were at full strength on opening night, but the energy at the Staples Center was something else. Even though the Clippers served as the home team, the stands were filled with Lakers fans who showered boos on Leonard. But the reigning NBA Finals MVP was unfazed as he led his team to victory.

Leonard torched the Lakers with 30 points, six rebounds, and five assists and had no Paul George with him.

The Lakers were missing Kyle Kuzma and Rajon Rondo but did have their superstar duo James and Anthony Davis, who combined for 43 points, 19 rebounds, and 13 assists. Danny Green unexpectedly exploded for a team-high 28 points, but the Clippers' 60 bench points to 19 were a difference-maker.

Knowing that this was such a good game with key pieces missing for both sides should only make basketball fans more excited for later meetings.

NBA preview: How Westbrook and Harden evolved since Thunder days