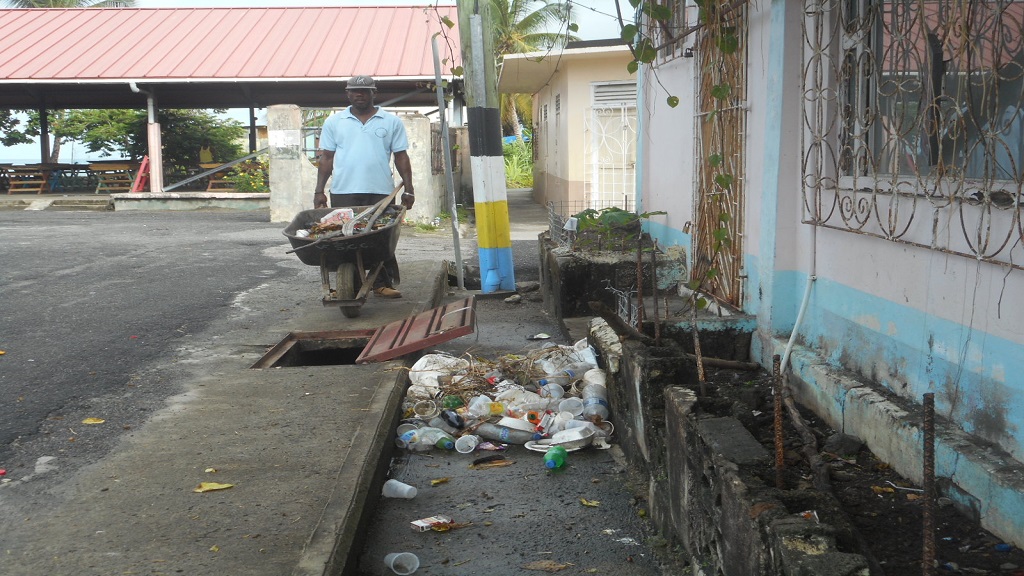 Clogged drains are causing flooding in certain parts of Vieux Fort whenever it rains heavily.

On Sunday, during the torrential rain, a group of men had to unclog the drains on Commercial Street, near the Vieux-Fort Provision Market, where water was gushing out of the clogged drains and flowing on the main roads. The deluge had forced a church located next to the market to end prematurely, due to the challenges it created for its members to enter it.

The previous day, the National Emergency Management Organization (NEMO), in a press release had advised persons living in flood-prone areas to be vigilant, as a tropical wave affects the island.

According to the sanitation workers employed with the Vieux-Fort South Constituency Council, the problem which the clogged drains near the market creates is also a concern for them because it gives them more work. They attribute the problem to poor garbage disposal in the town.

Dale Classe, one of the men who assisted in unclogging the drains on Sunday, told Loop News he wished the mayor of Vieux-Fort, Orricia Denbow-Bullen was around to see the mess the clogged drains are creating whenever it rains heavily.

“The drains were clogged with different things such as plastic bottles, plastic bags, and sticks, just to name a few,” Classe said.

Another man who also assisted in unclogging the drains said it’s a problem which needs immediate attention because we are in the hurricane season.

Over the years, Vieux Fort has been experiencing a garbage disposal problem.  The mayor of Vieux Fort has admitted as much in an interview with this reporter a few months ago.  At a fleeting glance in almost any part of the town, garbage can be seen strewn on the ground, in many cases in front of business houses, close to the drains.