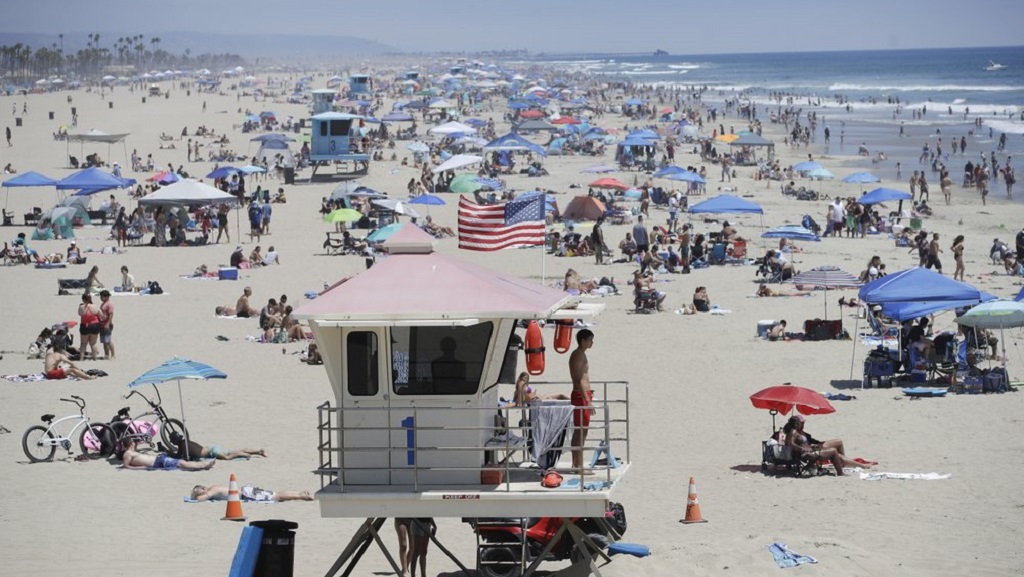 Worldwide confirmed coronavirus infections hit the 10 million mark Sunday as voters in Poland and France went to the polls for virus-delayed elections. Vice President Mike Pence called off campaign events in Florida and Arizona after surges in infections prompted worries that the US has lost control of its outbreak.

New clusters of cases at a Swiss nightclub and in the central English city of Leicester showed that the virus is still circulating widely in Europe, though not at the exponential rate of growth seen in parts of the US, Latin America and India.

Wearing mandatory masks, social distancing in lines and carrying their own pens to sign voting registers, French voters cast ballots in a second round of municipal elections. Poles also wore masks and used hand sanitizers, and some in virus-hit areas were told to mail in their votes to avoid further contagion.

"I didn't go and vote the first time around because I am elderly and I got scared," said Fanny Barouh as she voted in a Paris school.

While much of the concern in the US has been on big states like Texas, Arizona and Florida reporting thousands of new cases a day, rural states are also seeing surges of infections, including in Kansas, where livestock outnumber people.

The coronavirus resurgence in the US has drawn concern from abroad.

The European Union seems almost certain to bar Americans from travelling to the bloc in the short term as it draws up new travel rules to be announced shortly.

The surges of infections prompted Pence to call off campaign events in Florida and Arizona, though he will still travel to those states and to Texas this week to meet with their Republican governors. Those three governors have come under criticism for aggressively reopening their economies after virus-related lockdowns despite increasing infections in their states.

After confirmed daily infections in the US surged to an all-time high of 40,000 on Friday, Texas and Florida reversed course and closed down bars again.

Globally, confirmed COVID-19 cases passed the 10 million mark and confirmed deaths neared half a million, according to a tally by the Johns Hopkins University, with the US, Brazil, Russia and India having the most cases.

The US also has the highest virus death toll in the world at over 125,000.

Experts say all those figures significantly undercount the true toll of the pandemic, due to limited testing and missed mild cases. US government experts last week estimated the US alone could have had 10 million cases.

Britain's government is pledging to support local officials in the central English city of Leicester amid reports that a spike in COVID-19 cases could prompt authorities to lock the city down. So far, Britain has not targeted a specific region for a lockdown.

"We have seen flare-ups across the country in recent weeks, in just the last three or four weeks in particular," Home Secretary Priti Patel told BBC One on Sunday.

Pressed on the Leicester lockdown, she added: "With local flare-ups, it is right we have a localized solution in terms of infection control, social distancing, testing and many of the tools ... to control the virus, to stop the spread."

Polish voters were casting ballots, in person and by mail, for a presidential election that was supposed to have taken place in May but was postponed amid a chaotic political battle because of the pandemic.

President Andrzej Duda, a 48-year-old conservative backed by the nationalist ruling Law and Justice party, is running against 10 other candidates as he seeks a second 5-year term.

Iwona Goge, 79, was encouraged to see so many people voting in Warsaw.

"It's bad. Poland is terribly divided and people are getting discouraged," she said.

French voters are choosing mayors and municipal councillors in Paris and 5,000 towns and cities in a second round of municipal elections held under strict hygiene rules.

Key races include that for Paris mayor, who will preside over the 2024 Summer Olympics. The spread of the virus in France has slowed significantly but is still expected to hurt Sunday's turnout.

Italy, meanwhile, was honoring its dead with an evening Requiem concert in hard-hit Bergamo province. The ceremony in the onetime epicenter of the European outbreak came a day after Italy registered the lowest daily tally of COVID-19 deaths in nearly four months: eight.

European leaders were taking no chances, trying to tamp down new clusters. German authorities renewed a lockdown in a western region of about 500,000 people after about 1,300 slaughterhouse workers tested positive.

Swiss authorities ordered 300 people into quarantine after a so-called "superspreader" outbreak of the new coronavirus at a Zurich nightclub.

Serbian Defense Minister Aleksandar Vulin, meanwhile, tested positive. He was part of a Serbian delegation that attended a Victory Day parade this week in Moscow. Serbia's president met face-to-face with Russian President Vladimir Putin, but it was not clear whether Vulin did so.

Russia on Sunday recorded 6,791 new coronavirus cases, bringing its confirmed infections to over 634,000, the third-highest number in the world after the US and Brazil.

In Asia, Indian Prime Minister Narendra Modi said his country must focus on bolstering the economy as it exits lockdowns, even as the number of coronavirus cases still keep on climbing.

The pandemic has exposed wide inequalities in India, with public hospitals being overwhelmed by virus cases while the rich get expert treatment in private hospitals.

No positive cases were found in Beijing's beauty and barbershops, a sign that the city's recent outbreak has been brought under control.

Beijing officials have temporarily shut a huge wholesale food market where the virus spread widely, reclosed schools and locked down some neighbourhoods. Anyone leaving Beijing is required to have a negative virus test.

Tens of millions of Chinese travelled during the three-day Dragon Boat Festival that ended Saturday, with no outbreaks reported immediately.

Ivanisevic, the coach of Djokovic, tests positive for coronavirus

Fauci: Next few weeks critical to tamping down virus spikes