Controversy over wildlife tourism and selfies in the Amazon 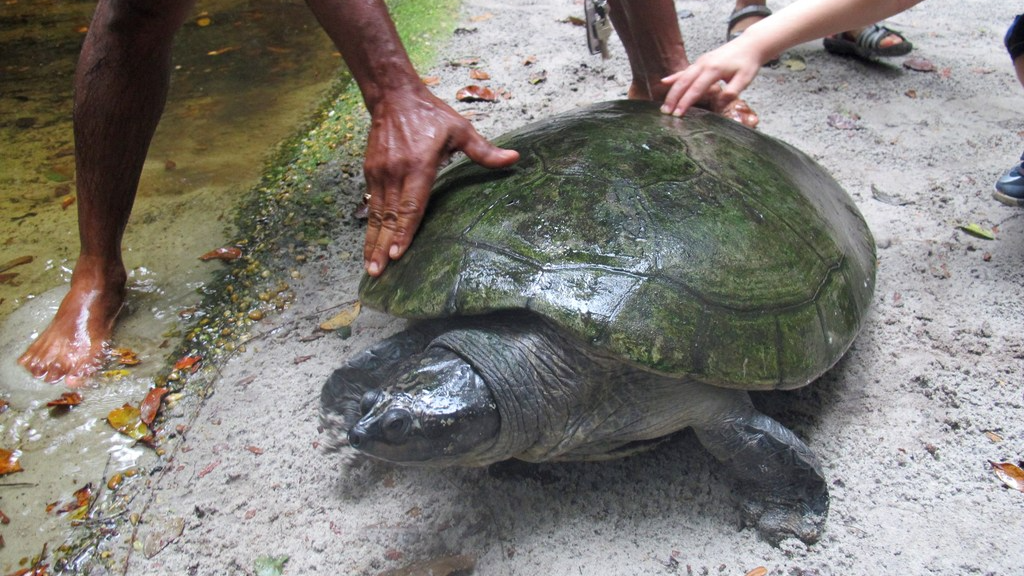 FILE - In this Oct.13, 2017, file photo, tourists touch the shell of a large turtle seen during a forest walk in the Amazon rain forest outside of Manaus, Brazil. Many guides are keen on helping tourists get photos of animals in the Amazon. (AP Photo/Peter Prengaman, File)

Planning to visit the Amazon? You might want to look at the controversy over wildlife selfies before choosing tours.

World Animal Protection, an advocacy group, issued a report saying animals like sloths suffer when they're kept in captivity for tourists to hold and photograph. Instagram is educating users about the issue by responding to hashtag searches like #slothselfie with this warning : "You are searching for a hashtag that may be associated with posts that encourage harmful behaviour to animals or the environment."

"We want tourists visiting the Amazon to know that if they care about wildlife, they should not use animals as photo props on their vacation," World Animal Protection's global wildlife adviser Neil D'Cruze said in an email interview. "The reality is that these 'wildlife selfies of a lifetime' actually involve significant animal suffering." He said animals presented to tourists have typically been pulled from natural habitats, are kept in "unsuitable conditions" and are handled by dozens of visitors a day, with tourists "typically unaware of the stress and injury" the creatures experience.

D'Cruze says the solution lies in educating travellers. He saluted Instagram's animal selfie warning as well as efforts by TripAdvisor , which since 2016 has declined bookings for attractions where tourists come into physical contact with captive or wild animals. D'Cruze also said there's "enormous potential" for developing tourism in the Amazon around alternatives like stays at jungle lodges or experiences with indigenous culture.

National Geographic reporter Natasha Daly travelled to the Amazon to confirm the World Animal Protection's findings . She found that officials in Manaus, Brazil, have been actively clamping down on the use of wildlife as tourist props. "By the time I was there in mid-August, a lot of tour operators had stopped going to locations where the animals are brought out," she said. But the practice persists in Puerto Alegria, Peru, where she saw 20 species brought out for tourists in three days. Tourists embarking on Amazon trips from nearby Leticia, Colombia, often spend time in Puerto Alegria. 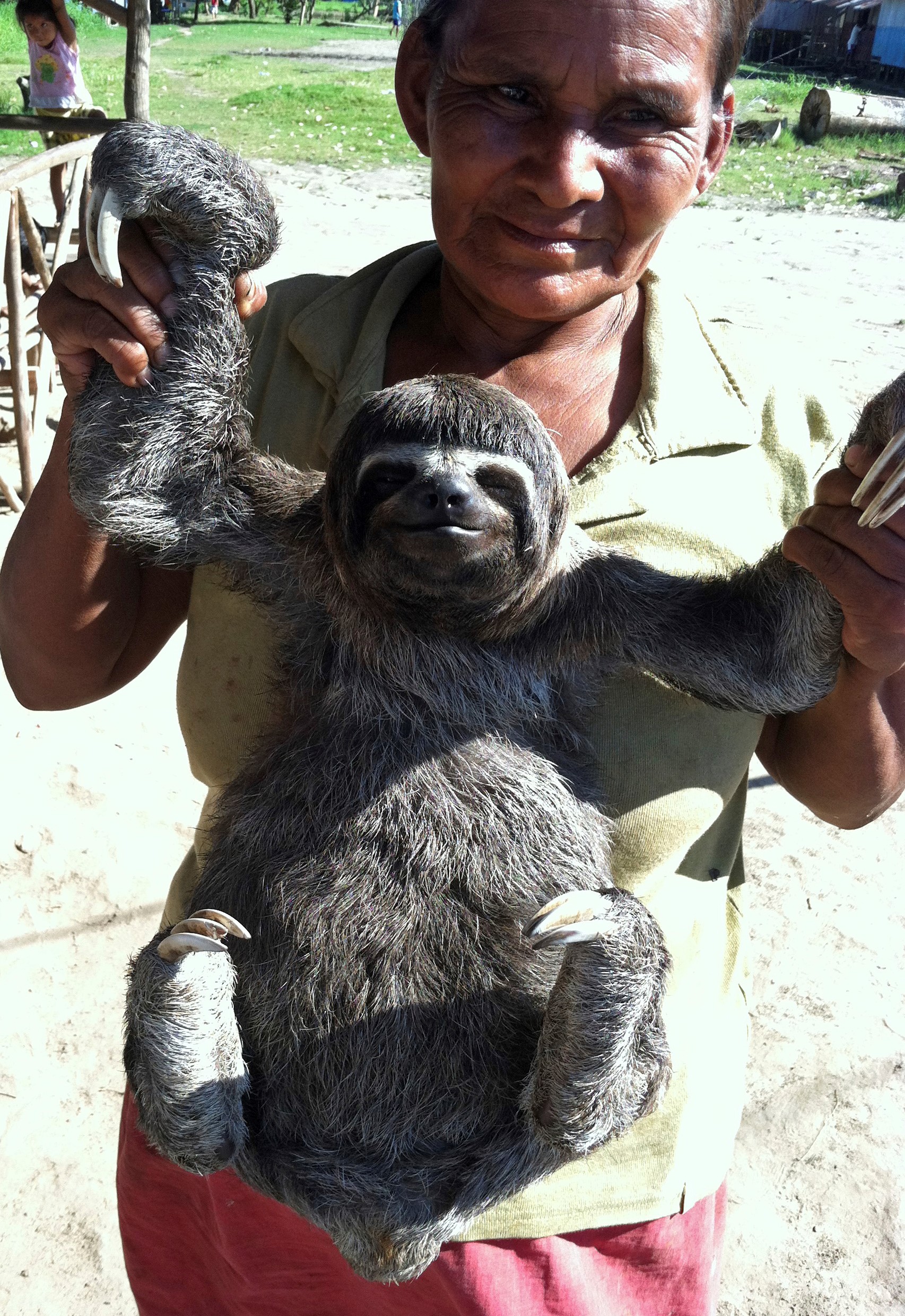 One challenge in steering tourists away from these selfie encounters, Daly said, is that Amazon wildlife is elusive, and day trips where sloths, kinkajous and snakes are offered up for photos make it easy for visitors to see them. An alternative experience might involve staying in a jungle lodge for a few days, but that's more expensive for travellers and takes more time and planning. Still, she said, educating consumers about these issues may impact their choices, especially among animal lovers who may not realise the harm in petting and photographing creatures. "As soon as an activity crosses the line from observation to interaction, it's probably going to be bad for the animal," she said.

D'Cruze disputed claims by some guides that keeping wildlife as pets is not much different from having a cat or dog. "Many tourists will not realise, for example, that the caiman crocodile mouth is being held shut with tape, or that the anaconda is severely dehydrated," he said. And sloths aren't really smiling and hugging you, the way it appears in so many selfies, he said: That's just the animals' mouth shape and tree-climbing behaviour.

Many national parks in the Brazilian Amazon have guidelines for how tourists and guides may interact with animals. For example, the Anavilhanas National Park has detailed rules limiting interactions with the region's famous freshwater dolphins.

Te Batista, who has been a guide on the Rio Negro for 20 years, makes a distinction between observing animals in the wild and in captivity. "When tourists tell me, 'I want to take the kinds of pictures I've seen on social media,' I tell them they have to understand that those were taken with animals in captivity," he said, adding that usually quells interest. But he might pull a caiman out for a few minutes to show it up close. "Within 10 minutes it will be back in the water," he said. "It's a different thing if that caiman is in captivity."

Enilson Mesquita, a guide for 28 years, does not permit tourists to touch animals. "When you go to the Amazon, you bring bug spray, your medicines, sunscreen. That could all be on your hands. When you hold an animal, it goes straight to its skin."

But some locals and officials think it's unreasonable for outsiders to judge or impede local tourism efforts or dictate how they should be run.

Vinicius Lummertz, president of Embratur, Brazil's tourism board, said it would be impossible to police how tourists interact with animals across such a massive territory. Brazil is larger than the continental United States, and the Amazon basin is roughly 60 percent of Brazil's territory.

"Brazil is in a position where it inherited this huge responsibility from developed countries that did not, during their own developments, preserve enough of their ecosystems," said Lummertz, expressing a common frustration of many Brazilians around the issue. "Developed countries have not done their job throughout history. Look at Europe. How many ecosystems have been saved there?"

He added: "This is a developing country that needs resources for education, healthcare, and then the world expects us to police the touching of a caiman on the head in an area about 60 percent size of the United States? It's not possible."

Pedro Cunha Menezes, public land use coordinator for the Chico Mendes Institute of Biodiversity Conservation, Brazil's equivalent of a national park service, says the problem "isn't the photo. It's the person holding an animal," he said, adding that in some cases touching an animal is illegal.

Menezes says national parks receive many complaints about tourist behaviour, from throwing away trash to mistreating animals. When egregious behaviour is witnessed by rangers, or it can be proved later with photos, including those from social media, people are fined, said Menezes.

Family of Linus Constantine aches for answers years after homicide