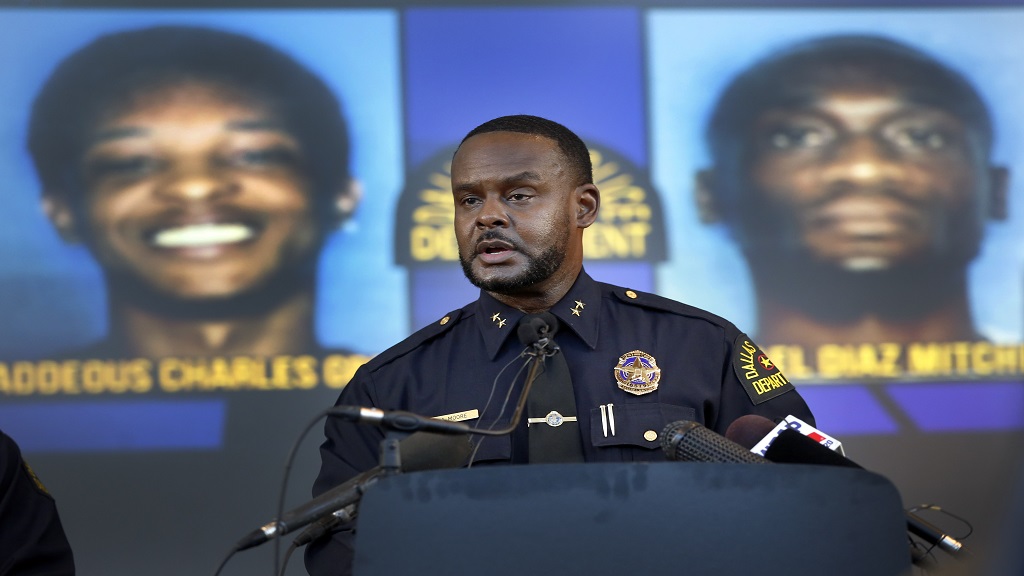 Authorities searched Wednesday for a third Louisiana man who is suspected in the killing of a witness who testified at the recent murder trial of a former Dallas police officer.

Thaddeous Green, 22, remained at large following the shooting death last Friday of Joshua Brown. Police said Tuesday that Brown was killed during a drug sale gone awry and that it had nothing to do with his involvement as a witness in the Amber Guyger case.

One of the other suspects, 32-year-old Michael Mitchell, was arrested by federal deputy marshals Tuesday night in Marksville, Louisiana, Dallas police said in a statement. Mitchell's nephew, 20-year-old Jacquerious Mitchell, remained in critical condition at a Dallas hospital with a gunshot wound that police say he blamed on Brown.

STATEMENT FROM THE FAMILY OF JOSHUA BROWN: pic.twitter.com/FrBqa8O2mV

Investigators believe the three men were in Dallas to buy drugs from Brown, Assistant Chief Avery Moore said at a news conference Tuesday. He said Jacquerious Mitchell told police that Brown shot him in the chest after Green and Brown began fighting during the drug deal, and that Green then shot Brown twice.

Green left with Brown's backpack and gun, police said. Authorities confiscated 12 pounds (5.4 kilograms) of marijuana, 149 grams of THC cartridges and more than $4,000 in cash during a search of Brown's home.

It is unclear how the three men came into contact with Brown or why they would have driven more than 300 miles (483 kilometers) from central Louisiana to buy marijuana in Texas.

The police announcement came amid widespread speculation about Brown's death, which happened two days after a jury sentenced Guyger to 10 years in prison for killing her upstairs neighbour Botham Jean in a case that added to the debate over race, politics and policing in America.

This feels like an inventive way to assassinate Joshua Brown’s character. What’s more unlikely? Guys driving four hours to buy weed, then shooting their dealer to death? Or Brown testifying in open court against a (former) cop who killed their neighbor, knowing he was a dealer? https://t.co/HlbifpCzIJ

Guyger, who is white, fatally shot Jean, who was black, in September 2018 in his apartment after she returned from working a long shift. She said she mistook his fourth-floor unit for her own, which was one floor below it, and believed Jean was an intruder. She was arrested on a manslaughter charge three days after the killing, prompting criticism that the charge was too lenient, but a grand jury later decided on the more serious charge of murder.

Here's what we know thus far about the murder of Joshua Brown. (Plus a few grafs laying out why folks are questioning the police account of what happened.) https://t.co/7MVcEExJdR pic.twitter.com/PGYYfIFjOO

Brown, who was black and lived on Jean's floor, was one of several neighbours who were called by prosecutors to testify at the trial. He said that on the night Jean was killed, he heard what sounded like "two people meeting by surprise" and then two gunshots. He said he had met Jean, a 26-year-old accountant from the Caribbean island nation of St. Lucia, for the first time that day.

The State knew Joshua Brown didn’t want to testify due to concerns for his safety. He flew to California when the trial began. They threatened him with jail if he didn’t return. He went straight from the airport to the court. Dallas County has a duty to protect him. They failed. pic.twitter.com/w3c2bdrwd3

Although police say Brown's killing had nothing to do with the case against Guyger, the conspiracy theories surrounding his death underscored the distrust that some Dallas residents have for their police department.

"I have no reason to believe that their conclusions so far in the investigation are unreliable, but I believe ... some members of the community will have a difficult time accepting it because of their association ... with the Amber Guyger trial," Lee Merritt, an attorney for the families of Brown and Jean, said Tuesday.

Merritt urged the department to hand off the investigation into Brown's death to another law enforcement agency as a way to bolster trust.

But Moore, the assistant police chief, said Tuesday that it was reckless for people to speculate as to the circumstances surrounding Brown's death, adding that it undermined the public's faith in the department.

The tensions between Dallas police and community activists erupted into shouting and shoving Tuesday at the first meeting of a new Community Police Oversight Committee. The fracas happened when the committee adjourned without taking public comment. Police Chief U. Renee Hall intervened and opened the floor to comment, which ended up being mostly critical of the department and mistrustful of the committee's intentions.

Merritt previously said Brown had had reservations about testifying in such a high-profile trial because he had been wounded in a shooting outside of a Dallas strip club last year. Police said Tuesday that investigators had no evidence linking that shooting to Brown's death.