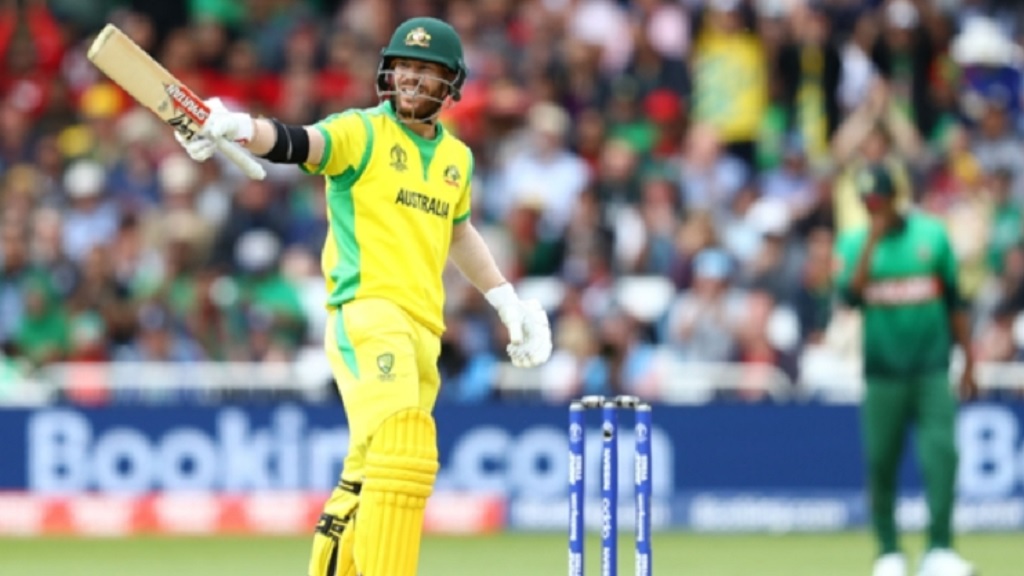 David Warner dominated Bangladesh with the highest score of the Cricket World Cup as Australia took another stride towards the semi-finals with a 48-run victory at Trent Bridge.

Warner has been in outstanding form and moved to another level in Nottingham, capitalising on being dropped by Sabbir Rahman on 10 by smashing 166 off 147 balls to become the leading run-scorer in the tournament.

Usman Khawaja (89) returned to form after Aaron Finch struck 53, with Soumya Sarkar taking 3-58 as the holders put 381-5 on the board in another Nottingham run-fest.

Mushfiqur Rahim (102 not out) made a brilliant first World Cup century and there were half-centuries for Tamim Iqbal (62) and Mahmudullah (69), yet Bangladesh were unable to pull off a repeat of their huge successful run-chase against West Indies on Monday.

The Tigers did post their highest ODI score of 333-8, but they nevertheless suffered a defeat that strikes a major blow to their hopes of reaching the last four as Australia went top of the table.

Sabbir was brought in to make his first appearance of the tournament as one of two changes to the Tigers side and he did not get off to the best of starts, putting Warner down at backward point before he had got going.

The left-hander made him pay in brutal fashion after biding his time, slog-sweeping Shakib Al Hasan for a massive six and bringing up his half-century in 55 balls.

Warner then accelerated with a magnificent combination of power and improvisation following Finch's exit, clearing the ropes five times and putting on 192 for the second wicket with Khawaja, who passed 50 for the first time in the tournament.

Glenn Maxwell (32 from 10) also did some late damage after Warner and Khawaja had been dismissed by Soumya, who missed out with the bat when he was run out by Finch following a big mix-up.

The fit-again Marcus Stoinis (2-54) claimed the big wicket of the in-form Shakib (41) and the Tigers were 144-3 almost halfway through their innings when Tamim chopped on.

Mitchell Starc rattled Liton Das on the helmet straight after ending Tamim's knock and the number five was on his way after being trapped in front by Adam Zampa, but Mushfiqur and Mahmudullah made a game of it.

STARC AND AUSTRALIA RISE TO THE SUMMIT

Nathan Coulter-Nile (2-58) ended an 83-ball stand when Mahmudullah holed out after hitting three sixes and five fours in a swashbuckling 50-ball knock, while the Australia seamer compounded Sabbir's misery by bowling him first ball.

Starc (2-55) became the top wicket-taker in the tournament and, although the excellent Mushfiqur reached three figures in the penultimate over, Australia comfortably made it five wins out of six.