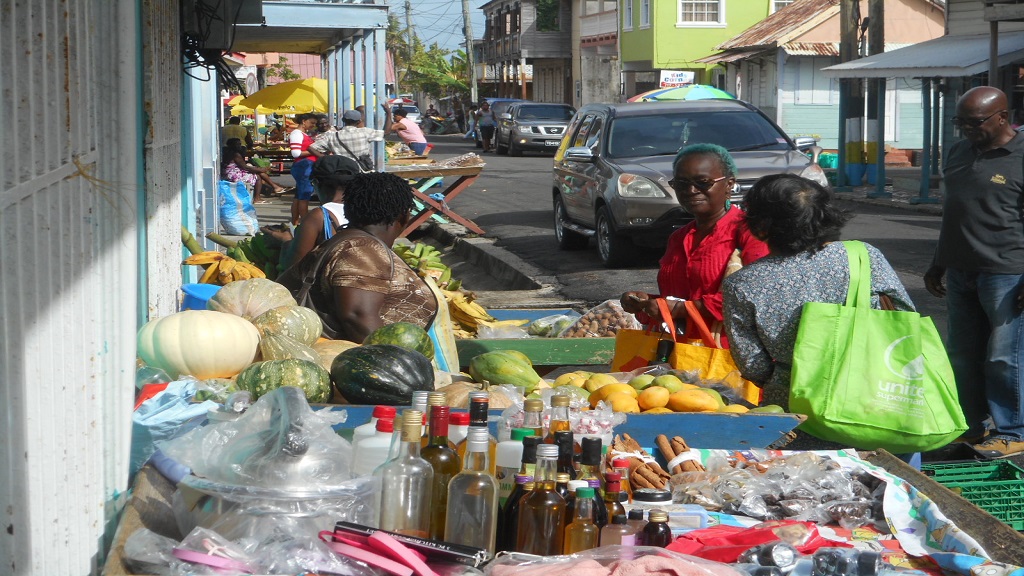 While street vendors in Vieux-Fort are complaining that things are hard and their agricultural produce is not selling, their customers are accusing them of making things hard and contributing to their own plight.

According to the vendors, over the years things have been bad, but recently it has gotten worse.

The vendors, many of who once occupied the Vieux-Fort Market, have taken it on their own to relocate to various parts of the town because of what they described as “very poor sales” in the vicinity of the market. Over the years, many attempts were made by the Vieux-Fort South Constituency Council, in collaboration with the police, to force the vendors back in the vicinity of the market, but to no avail. Some of those who continued vending near the market rely on their loyal customers to purchase from them.

Over the years, many business houses which were located in various parts of Vieux-Fort town, including lower Clarke Street, Commercial Street and Theodore Street, have been relocated to Beanfield . Most commercial activities in Vieux-Fort now take place at Beanfield, where many business houses and government departments have been relocated to, and where a branch of the largest supermarket chain on the island, Massy Stores, is located.

According to the shoppers, one of the reasons why the vendors are contributing to their own plight is the fact that they now only sell in large quantities, and at a price which is more expensive than Massy Stores, to whom many of them sell their produce. According to the shoppers, the quality of produce they sell to Massy Stores is much better than those they sell to them. They say because of these reasons, they prefer to buy agricultural produce from Massy Stores.

Street vendors usually sell the agricultural produce which Massy Stores rejects from them, on the streets.

Another reason why shoppers say the vendors are to be blamed for their plight is that they prefer to go back home with their unsold items, rather than selling them at a cheaper price.

According to the shoppers, when they compare the prices of certain agricultural produce sold by vendors in Vieux-Fort with the prices they are sold in Castries, the prices in Castries are cheaper.

When Loop News asked several street vendors in Vieux-Fort whether they are prepared to reduce the number of their items in a heap or bag to accommodate persons without enough money to buy them in the quantity they are displayed for sale, the majority said no.

Jermain Ragoonan, one of the few vendors who will accommodate a customer in order to make a sale, said she understands the situation of some customers.

“I know there are vendors who will not take out anything from their heap to sell it cheaper, but if I have to do so to make a sale, I will,” Ragoonan, who has been a street vendor in Vieux-Fort for many years, said.

Ella Avril, another street vendor said: “The vendors themselves are causing things to be hard. They sell their produce too expensive,” adding that they sell the same produce cheaper to Massy Stores.

Commenting on her sales, she said it is bad.

She said one of the reasons for their plight is as a result of the relocation of 1st National Bank of Saint Lucia Limited, which was located a few metres from where she plies her trade, to Beanefield.

She added that another reason is the lack of a proper market in Vieux-Fort, adding that the one there is not fit for vending.

“Things are hard. It’s not our fault for selling our produce so,” she lamented.