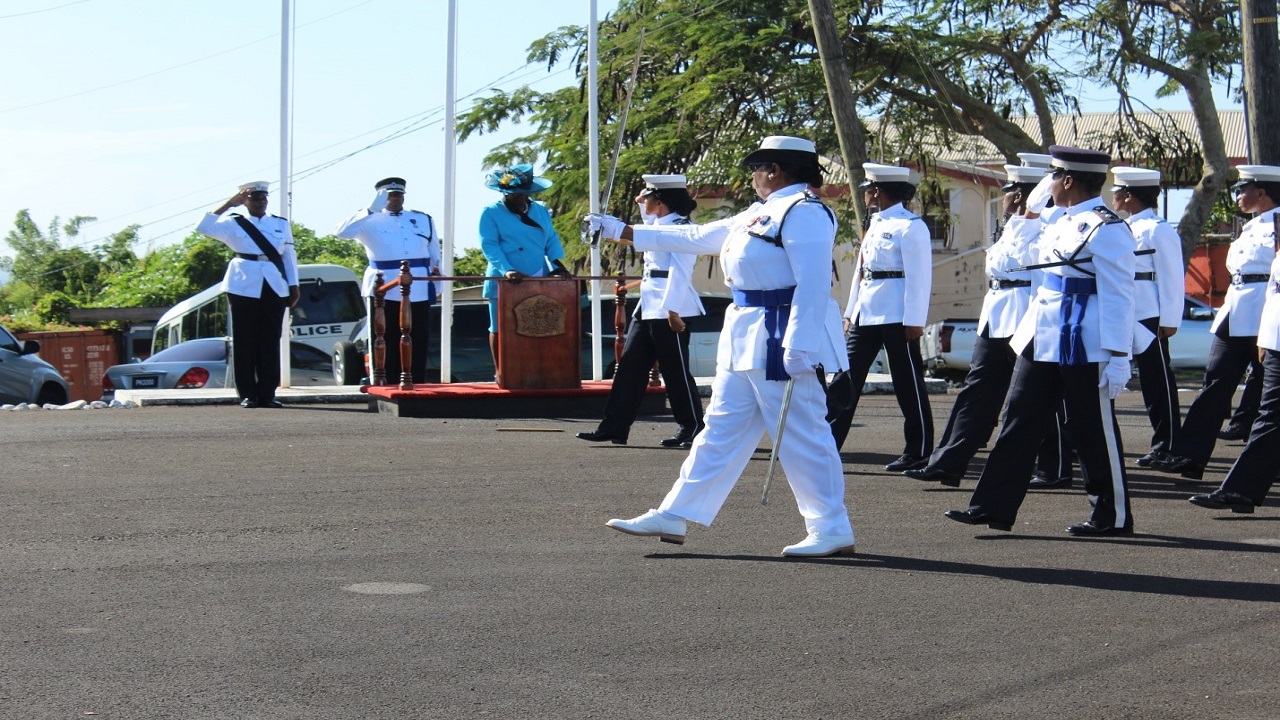 As she prepares to demit office on Sunday, Her Excellency Governor General Dame Pearlette Louisy Thursday attended what likely her last police parade in her capacity as the representative of Her Majesty Queen Elizabeth II.

The parade, which was held on the grounds of the Police Academy at Tapion, was the Royal St. Lucia Police Force's way of saying thank you to someone, Police Commissioner Severin Moncherry said, had been good to the police throughout her 20 years of service as Governor General in St. Lucia.

Dame Pearlette loves parades, as noted by Moncherry who indicated that this gave him and his executive added reason to hold Thursday’s parade in her honour.

And she loved it.

Dame Pearlette told the platoon of officers comprising females only how much she appreciated their way of telling her good bye as she bids farewell to public life.

“I probably will be watching you from the sidelines in the future,” she told the officers as she thanked them for their precision, the way they carry themselves, the slow march and the quick march.

“I want to wish you the very best” she said, holding on to her hat which the wind was threatening to blow away.

The well-loved soon to be ex-Governor General called on the female police officers to apply themselves to the profession as she is longing to see someone from their ranks become the island’s first female police commissioner.

In attendance was Home Affairs Minister Hermangild Francis who told reporters that he gave the parade his blessing on learning about it from Moncherry.

Francis, who is in mourning at the loss of his mother who passed away almost two weeks ago, said he had to be present at the parade because of a number of factors, one of which being that Dame Pearlette and his family are from the district of Laborie.

Dame Pearlette informed St. Lucians of her resignation via an address to the nation on December 20, a position she held from September 17, 1997. Since her announcement eight days ago many people have praised her for her performance in that office, in essence saying that she lifted the office to levels never seen before when she took over.

There have also been critics of the move, several saying that she may have been forced out of office by the present government seeing that she was appointed to the post by a Labour Government.

But Prime Minister Allen Chastanet has so far rebuked persons preaching a force out by his government.

According to Chastanet there was collaborative discussion between the government and the Governor General regarding her resignation and that the time had come for a changing of the guard.

The prime minister said he will be announcing Dame Pearlette’s replacement early in the New Year. Out of two names making the rounds as possible replacements, one seems to be making greater traction with government than the other and that person is Neville Cenac, a former Foreign Minister under a Labour Administration several years ago turn United Workers Party supporter under deceased Prime Minister Sir John Compton.

Governor General to step down tonight

CDF: Dame Pearlette Louisy a 'champion of our culture'