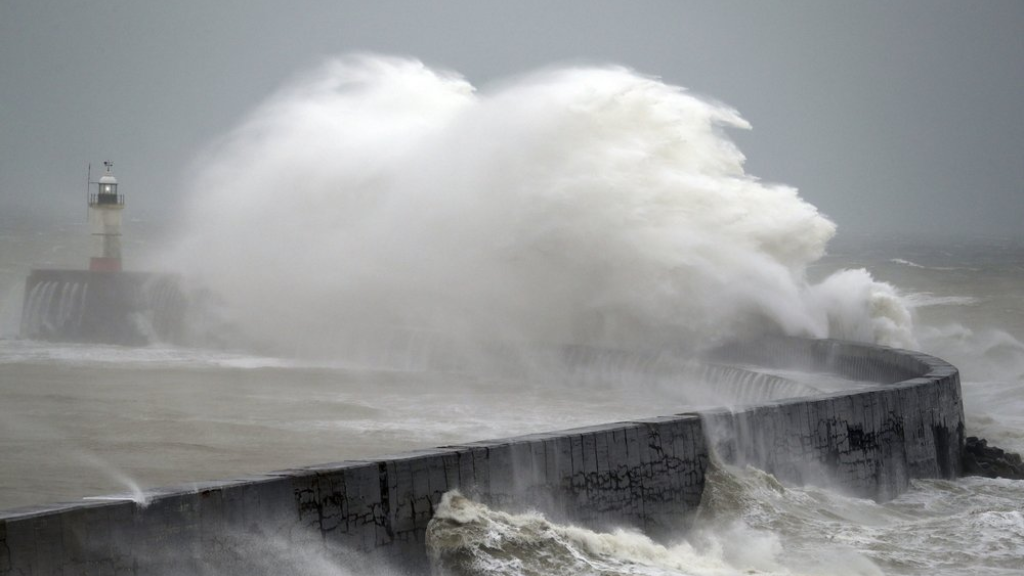 Waves crash into the wall at Newhaven south east England, as Storm Ciara, named by the Met Office national weather agency, hits the UK, Sunday Feb. 9, 2020. Trains, flights and ferries have been cancelled and weather warnings issued across the United Kingdom as a storm with hurricane-force winds up to 80 mph (129 kph) batters the region. (Andrew Matthews/PA via AP)

A strong winter storm that has battered Europe with hurricane-force winds and heavy rains has killed at least five people and caused severe travel disruption on Monday.

Two women, a mother and her daughter, also died in Poland after the storm ripped off a roof of a ski rental equipment building in the mountain resort of Bukowina Tatrzanska, near the border with Slovakia, and sent it hurtling onto people standing near a ski lift, police said. Two other people were injured in the incident too.

In Sweden, one man drowned after the boat he and another person were sailing in on the southern lake of Fegen capsized. The victim was washed ashore and later died. The other person is still missing, according to the Aftonbladet daily.

Two men, one in the north of Slovenia and another in southern England, died after their cars were hit by falling trees.

Britain, which bore the brunt of the storm on Sunday, was assessing the damage and working to get power restored to 20,000 homes. However, for parts of northern England and Scotland, the respite is set to be brief with forecasts of blizzards and snow.

"While Storm Ciara is clearing away, that doesn't mean we're entering a quieter period of weather," said Alex Burkill, a meteorologist at the Met Office. "It's going to stay very unsettled."

In the wake of the storm, many parts of the country were mopping up after a month and a half's rainfall fell in just 24 hours in some places and rivers burst their banks. Some 110 flood warnings remained in place across the country. The River Irwell burst its banks in northwest England and residents were evacuated.

In the Scottish town of Hawick, which borders England, a guest house and bistro collapsed into the River Teviot on Sunday. No one was injured.

Britain's transport networks remained disrupted with flights, ferries and trains all seeing cancellations and delays. Some ferries across the English Channel were making crossings after being closed down on Sunday. P&O Ferries said in a tweet that further disruptions were possible on Monday.

British Airways said in a statement that there will be a "minor knock-on effect" to Monday's schedule.

"We're getting in touch with those affected, and have brought in extra customer teams to help them with a range of options including a full refund or an alternative flight between now and Thursday," the airline said.

The storm has now largely passed through France, though meteorologists warned that the Mediterranean island of Corsica could see winds as high as 200 kph later Monday. Waves lashed the northern coast, and high winds blew a truck onto its side on the A2 highway that links Belgium with France. Up to 130,000 homes were without electricity Monday morning, stretching from Brittany, in western France, through Normandy and the northern regions.

In Germany, utility companies were also scrambling to restore power to some 50,000 homes in northern Bavaria early Monday.

Train travel across Europe's biggest economy was also severely disrupted, leaving many commuters unable to get to work. Deutsche Bahn said Monday it was slowly resuming long-distance rail services in the north of the country but warned travellers to expect further disruptions. Airlines cancelled hundreds of flights from German airports.

The storm, which was dubbed Sabine in Germany, also led to school closures in several cities and regions, including Germany's North Rhine-Westphalia state, where several people were injured by falling branches and toppling trees.

About 96,000 households were also without electricity across the Czech Republic and at least seven flights from Prague's international airport were cancelled, including the flights to Zurich, Munich, Frankfurt, Duesseldorf, London and Amsterdam.

An Airbus A320 operated by Qatar Airways was diverted from Prague to Vienna after the pilots were not able to land early Monday. Dozens of train routes were blocked due to trees on the tracks, while other trains are delayed.

US travellers warned to be aware of powerful storm