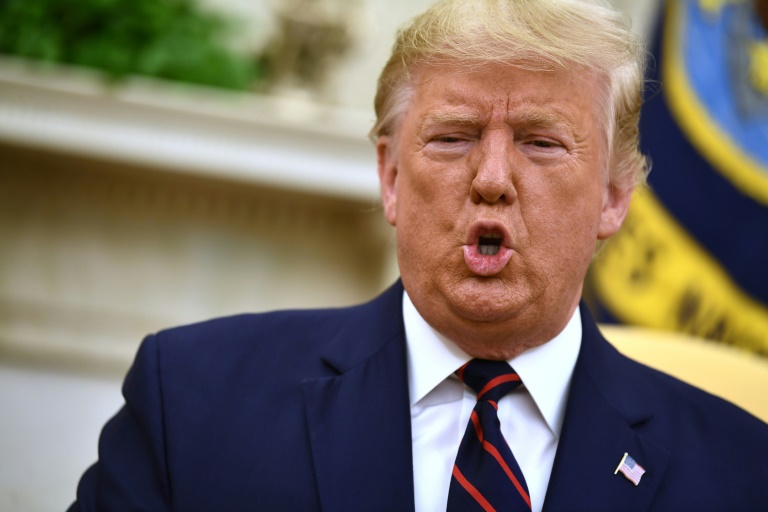 Agitated and angry, President Donald Trump squared off against House Democrats, packing his increasingly aggressive impeachment defence with name-calling and expletives. Quietly but just as resolutely, lawmakers expanded their inquiry, promising a broad new subpoena for documents and witnesses.

Democratic leaders put the White House on notice that the wide-ranging subpoena would be coming for information about Trump’s actions in the Ukraine controversy, the latest move in an impeachment probe that’s testing the Constitution’s system of checks and balances. They said they’d be going to court if necessary.

Amid the legal skirmishing, Wednesday was a day of verbal fireworks.

The president complained that House Speaker Nancy Pelosi was handing out subpoenas “like cookies,” railed against a government whistleblower as “vicious” and assailed the news media as corrupt and the “enemy.” All that alongside a presidential tweetstorm punctuated with an accusation that congressional Democrats waste time and money on “BULL----.”

Pelosi said Democrats had no choice but to take on the most “solemn” of constitutional responsibilities to put a check on executive power after the national security whistleblower’s complaint that recently came to light. The administration and Congress are on a collision course unseen in a generation after the whistleblower exposed a July phone call the Republican president had with Ukrainian President Volodymyr Zelenskiy in which Trump pressed for an investigation of Democratic political rival Joe Biden and his family.

“We take this to be a very sad time” for the American people and the country, Pelosi said. “Impeaching the president isn’t anything to be joyful about.”

Standing beside her, intelligence committee Chairman Adam Schiff accused Trump of “an incitement to violence” with his attacks on the unnamed whistleblower, who is provided anonymity and other protections under federal law. He said the investigation is proceeding “deliberately” but with a sense of “urgency.”

Unlike Trump, Schiff never raised his voice but said firmly: "We’re not fooling around here.”

Pelosi, in an ABC interview that aired Thursday on “Good Morning America,” said Trump is “scared” of the impeachment inquiry and the arguments that can be made against him.

“We feel that we are on very firm ground as we go forward,” she said.

Democrats are now talking of basing an impeachment charge of obstruction on the White House’s slow-walking of documents and testimony _ administration actions that echo the months of resisting Congress in its other investigations into special counsel Robert Mueller’s report and Trump’s business dealings.

Ahead of the new subpoena, the chairmen of three House committees accused the administration of “flagrant disregard” of previous requests for documents and witnesses and said that refusal could be considered an impeachable offence.

The standoff took on a defiant tone this week when Secretary of State Mike Pompeo said he would not stand for Democrats “bullying” his employees into appearing before the congressional committees, even as he acknowledged that he, too, had been among those US officials listening on the line during the Trump’s phone call with the Ukraine leader.

Pompeo’s admission is complicating his situation, and House leaders now consider him a “witness” to Trump’s interaction with Ukraine.

One former State Department official, Kurt Volker, a former special envoy to Ukraine, will appear Thursday for a closed-door interview with House investigators. He is said to be eager to tell his side of the story. That’s ahead of next week’s deposition of ousted US Ambassador to Ukraine Maria “Masha” Yovanovitch.

The circumstances of Yovanovitch’s sudden recall from Ukraine are the subject of conspiracy speculation, and the State Department’s Inspector General Michael Steve Linick sought an “urgent” meeting Wednesday to brief staff of several committees.

During that private session, Linick told them he received a packet of materials from the State Department’s Counsel T. Ulrich Brechbuhl, according to one person granted anonymity to discuss the closed-door session.

Rep. Jamie Raskin, D-Md., said the package contained information from debunked conspiracy theories about Ukraine’s role in the 2016 election. Trump has long pursued those theories, a topic he discussed with Zelenskiy in the phone call that sparked the impeachment inquiry.

It was unclear where the package originated, but it was in a White House envelope and included folders from Trump hotels, according to another person familiar with the briefing, a Democrat. That person said the White House sent the envelope to Pompeo and it contained notes from interviews that took place in the New York City office of Trump’s personal lawyer Rudy Giuliani with various Ukrainians about the debunked conspiracies.

“It raises more questions than it answers,” said Raskin.

Brechbuhl has also been called to give a deposition to the House.

Trump, in appearances in the Oval Office and a joint press conference with the president of Finland, displayed an unusual show of anger as he defended what he has called his “perfect” phone call with Zelenskiy and decried the impeachment inquiry.

He demanded that a reporter pressing him on his dealings with Ukraine move on, labelling the journalist “corrupt.” Earlier in the day he said even though he popularized the phrase “fake news,” he now preferred to say “corrupt” news. “This is a hoax,” Trump said.

Later he called himself, as he has before, a “very stable genius” who always watches what he says in conversations.

Trump has tweeted in recent days that he wants to “find out about” the whistleblower and question him or her, though the person's identity is protected by the Whistleblower Protection Act.

Schiff’s spokesman acknowledged that the whistleblower had gone to the intelligence committee before filing the formal complaint but said the staff advised the person to contact an inspector general and seek counsel, and at no point did the committee review or receive the complaint in advance.

The new subpoena coming Friday from House Oversight and Reform Chairman Elijah Cummings will be directed toward acting chief of staff Mick Mulvaney and request 13 separate batches of documents concerning the July call and related matters. The call came against the backdrop of a $250 million foreign aid package for Ukraine that was being readied by Congress but stalled by Trump.

The whistleblower alleged in August that the White House tried to "lockdown" Trump's July 25 phone call with the new Ukrainian president because it was worried about the contents being leaked to the public. The acting director of national intelligence eventually made the complaint public.

In recent days, it has been disclosed that the administration similarly tried to restrict information about Trump's calls with other foreign leaders, including Russia's Vladimir Putin and Saudi Arabia's Mohammed bin Salman, by moving memos onto a highly classified computer system.

In Russia, Putin said scrutiny over the phone-call showed that Trump’s adversaries are using “every excuse” to attack him.

Pompeo acknowledges he was on Trump call at centre of probe