Did he or didn't he? No clarity on Catalan independence bid 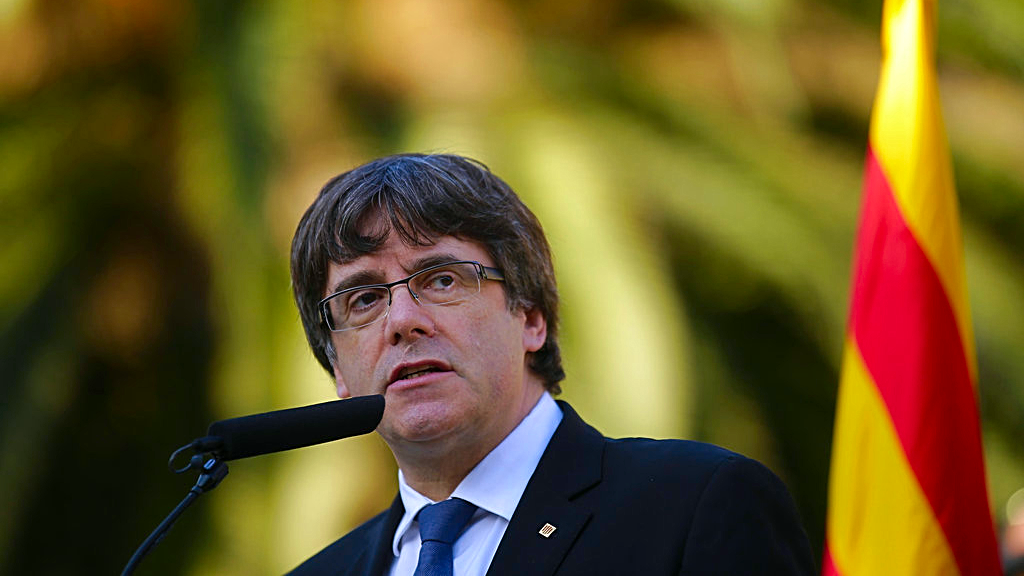 Catalan regional President Carles Puigdemont addresses to the media after a ceremony commemorating the 77th anniversary of the death of Catalan leader Lluis Companys at the Montjuic Cemetery in Barcelona, Spain, Sunday, Oct. 15, 2017. (AP Photo/Manu Fernandez)

A Monday morning deadline came and went without the president of the Catalonia region clarifying whether he had declared independence from Spain, and the Spanish government says he now has until Thursday to backtrack on any steps the region has taken toward secession.

Catalan President Carles Puigdemont and Spanish Prime Minister Mariano Rajoy exchanged letters but made no headway in the conflict, one of the deepest political crises the country has faced in the four decades since democracy was restored.

Responding to a demand from Spain's central government to state explicitly whether he had declared independence, Puigdemont instead sent a four-page letter seeking two months of negotiations and mediation.

"The priority of my government is to intensively seek a path to dialogue," Puigdemont said in his letter. "We want to talk ... Our proposal for dialogue is sincere and honest."

Rajoy's response came less than two hours later. The conservative prime minister lamented that Puigdemont had declined to answer the question and said that he has until Thursday morning to fall in line.

Otherwise, he faces the possibility of Spain activating Article 155 of the Constitution, which would allow the central government to rescind some of the powers that Catalonia has to govern itself. The wealthy northeast region, which includes Barcelona, is home to 7.5 million people and contributes a fifth of Spain's 1.1 trillion-euro ($1.3 trillion) economy. Polls have shown about half of the people there don't want to secede.

"To extend this situation of uncertainty is only favoring those who are trying to destroy civic concord and impose a radical and impoverishing project in Catalonia," Rajoy wrote in his letter.

"It wasn't very difficult to say yes or no," Rajoy's number 2, deputy prime minister Soraya Saenz de Santamaria, told reporters in Madrid. "That was the question that was asked and the response shouldn't be complicated."

Saenz de Santamaria said that Puigdemont's call for dialogue is "not credible" and that Spain's national parliament is the place to talk.

Spain has repeatedly said that it's not willing to sit down with Puigdemont if calls for independence are on the table, or to accept any international mediation at all.

The new deadline gives him till Thursday to either say he didn't declare independence or to show he's taking action to cancel the declaration if he did.

Puigdemont held a banned independence referendum on Oct. 1. Those who voted were overwhelmingly in favor of the wealthy northeast region seceding from the rest of the country, but fewer than half of those eligible turned out to cast ballots.

Based on the referendum, Puigdemont made an ambiguous declaration of independence last week, then immediately suspended it to allow time for talks and mediation.

In Monday's letter, he called on Spanish authorities to halt "all repression" in Catalonia, referring to a police crackdown during the referendum that left hundreds injured.

He said the Spanish government should also end its sedition case against two senior Catalan regional police force officers and the leaders of two pro-independence associations. All four, including Catalan police chief Josep Lluis Trapero and Jordi Sanchez, the head of the Catalan National Assembly, were due at a hearing Monday in Spain's National Court in Madrid.

Officials are investigating the roles of the four in Sept. 20-21 demonstrations in Barcelona. Spanish police arrested several Catalan officials and raided offices in a crackdown on referendum preparations.

The four were released after questioning Oct. 6, but the court said they would be recalled once it reviewed new police evidence relating to the referendum.

Trapero and Sanchez arrived separately to the court and were greeted by shouts of "traitors" by one or two protesters.

Sanchez and Jordi Cuixart, leader of the pro-secession Omnium Cultural group who is also under investigation, were greeted by several dozen supporters from pro-independence Catalan parties who chanted "you are not alone" as the two entered the court together amid heavy security.

Spain warns it will act if Catalonia declares independence