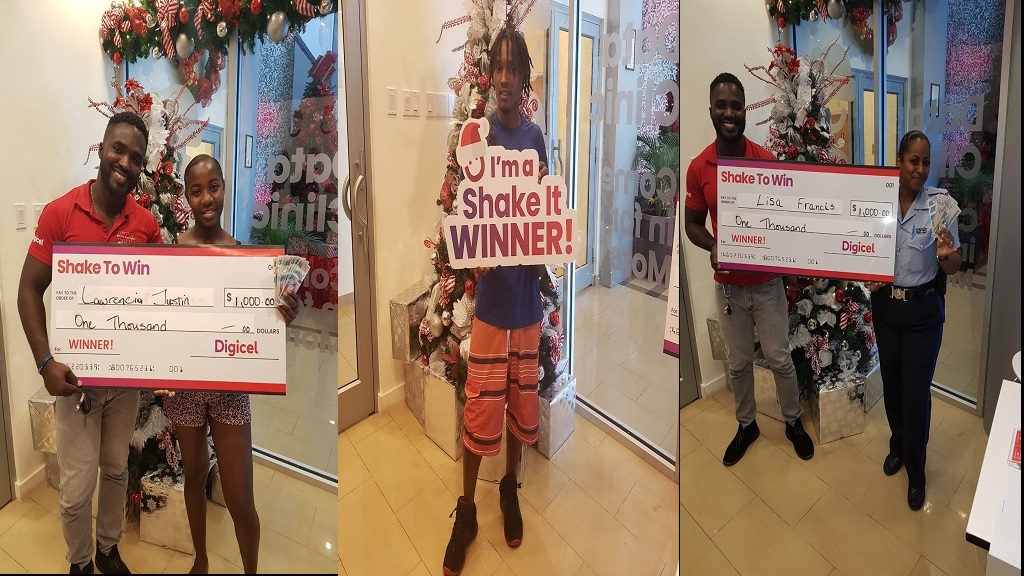 The catchphrase to secure cash this holiday season is “Shake to Win With Digicel”.

Telecommunications giant Digicel revealed the promotion that promised lucky winners a chance to win $1000 in cash by answering a special call with the catchphrase.

Three lucky $1000 dollar winners shared their excitement and plans for their cash prize with Loop News.

Shake to Win winner Lawrencia Justin says the money gave her the much-needed help she was in need of.

“I felt great and a relief that all my struggles and well…hard work; I had to push with less effort knowing that I got a little help…it gave me a boost,” she noted.

She shared her immense gratitude to Digicel and had a message to individuals using other telecommunication services.

“I would like to thank Digicel and I would also like to encourage everybody to continue to be with them...”

“Although I got teased for always answering my phone "Shake to Win with Digicel," the payout was worth the taunt.”

She says she has already started to spend her winnings.

“I have actually already brought my decorations with that, my tree, and my children’s games so it came in handy, at the right time,” she admitted.

Francis says she still answers her phone using the catchphrase because there is still money to be won.

Meanwhile, another lucky winner Cherson Sandidor says he too is thankful for winning the money and that he has already invested the cash into his business.

“Digicel actually gave me a pre-Christmas gift so I am very grateful for that. The timing of this promotion was very good because there are many people who do not know where they getting money to pay their bills or provide for their loved ones for Christmas.”

All three winners were excited to continue on using Digicel service and taking part in more chances to win big.

Digicel customers can enter for a chance to win by ensuring they have the new MyDigicel app, purchasing an LTE smartphone, activating any Freedom LTE prepaid or post-paid plan.

The promotion also allowed customers to shake their phone via the Shake It gaming mechanism in the MyDigicel app for daily and weekly prizes.

The Shake to Win promotion is valid from Friday November 22nd till December 31st, 2019.

The 7 most impactful ‘shakes’ that shook the world